Popular footwear and skate brand Vans has released a range of vegan shoes to raise awareness of endangered species.

As well as featuring 13 endangered species, the vegan shoe range marked the first partnership between Vans and San Francisco-based organisation WildAid. The brand pledged to donate $10,000 to the charity, which works to reduce the illegal wildlife trade supports conservation efforts.

WildAid CEO Peter Knights said of the collaboration, “We hope these vivid depictions of the world’s most imperiled species can help inspire the change we need to save them.”

The collection comes under the Vans premium brand “The Vault,” first launched in 2003. The brand has collaborated with fashion houses and mainstream brands alike, from Marc Jacobs to The North Face. In line with the Vault’s exclusive operation, the new vegan shoes — which included styles such as slip-ons and Sk8-His — were only available at selected locations.

As well as its donation to WildAid, the Vans also encouraged contributions at a “donation-inspired exhibition” at its pop-up store located on the Lower East Side in New York City. Original artworks by Steadman were on show alongside the new range.

The range is deliberately eco-friendly, in keeping with the idea behind the release. It features organic cotton, FSC certified wood skateboard decks, and packaging made from 100 percent recycled content. 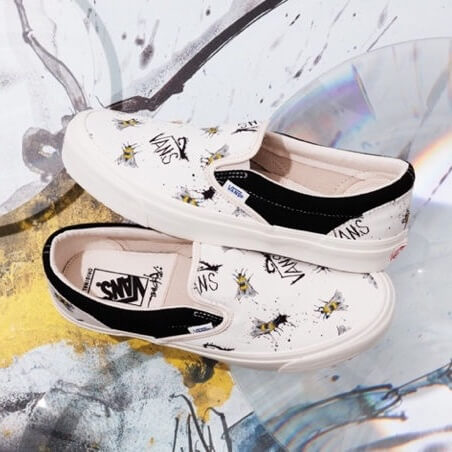 Conservation is a cause close to the hearts of both Steadman and Levy. The pair coined the term “Gonzovation” and explained the concept; “[w]e’ve always maintained that you’ve got to make people laugh in order to engage them.”

They add, “If we just tell people, ‘you’re all dreadful b*stards, you’ve screwed it all up, and now look what’s going to happen,’ people go, ‘yeah, whatever.’ But if you make them laugh, you’ve got a chance.”

Gonzovation is the pair’s alternative approach to conservation. Levy told The Revelator that the idea “allows the rest of us who aren’t in those hallowed halls of conservation to have a chance to do something.”

“Conservation needs to find a way to get more people to do things that will help,” he says.

“We need to engage. We need to find a way to make people feel they’re part of it, so they’re not disassociated from conservation projects. That’s the million-dollar question for conservationists today: how do we make people gonzovationists?”