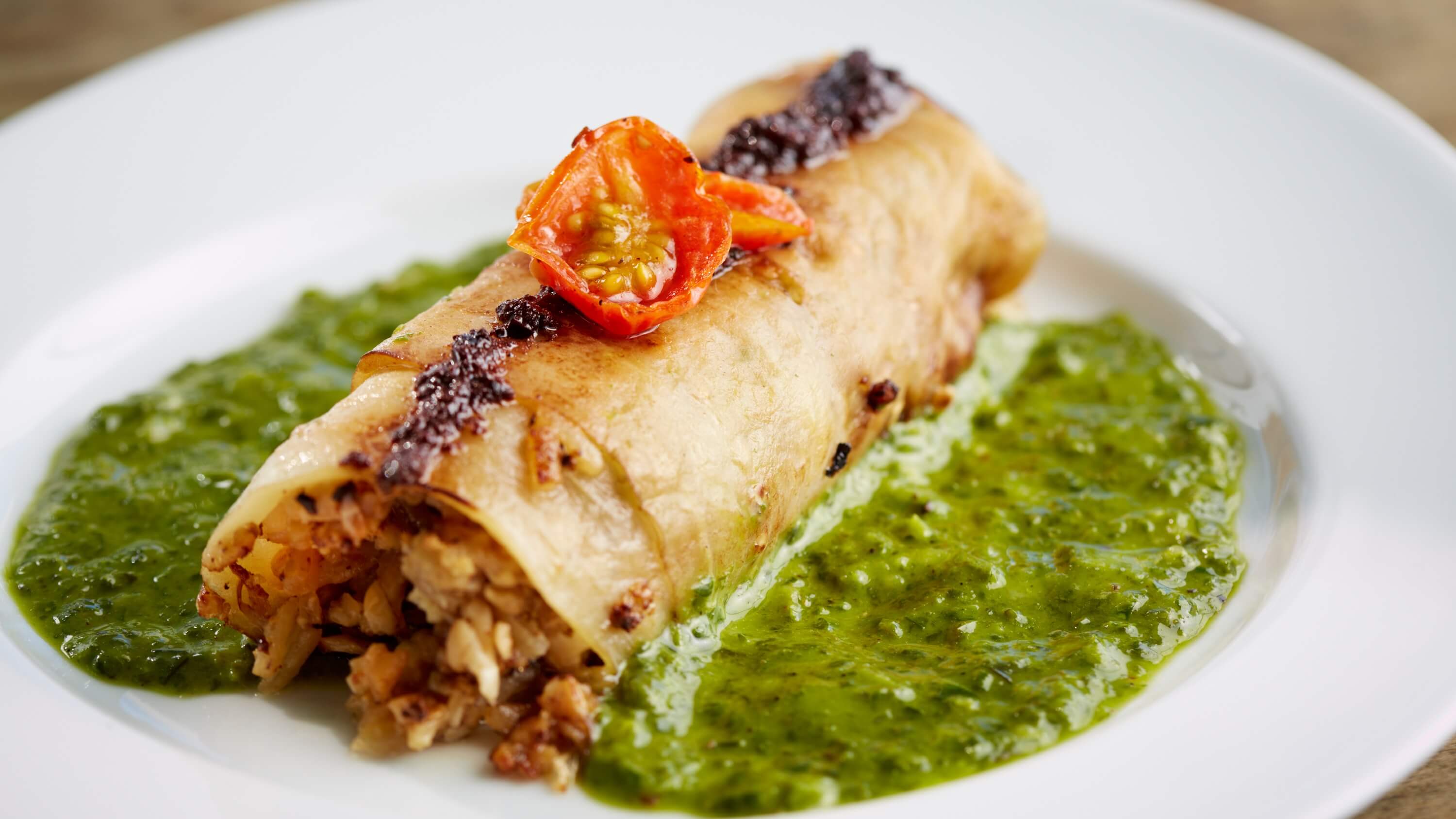 Our perception of vegetables has been understandably tainted. For many of us, our avoidance of the good stuff can be traced back to childhood dinners featuring the standard plating of meat and two vegetables.

While our younger selves may have learned the importance of marinades, braises, sauces, tenderizers, and seasonings in cooking meat, vegetables have been wrongly relegated to the role of the flavorless side dish. Plant-based chefs Rich Landau and Kate Jacoby, the owners of four vegan restaurants, are changing diner perspectives of what vegetables can be. Each chef has been nominated for the prestigious James Beard Award, an award that recognizes culinary excellence in the United States that is given by the prestigious James Beard Foundation.

Landau, who has been pioneering modern plant-based dining since 1994, was a finalist for best chef in the Mid-Atlantic region, won Food Network’s “Chopped.” Jacoby, a pastry chef and certified sommelier, is in charge of desserts and the beverage programs at all four restaurants. She is a three-time semifinalist for the James Beard Award for Outstanding Pastry Chef. At their four-star Philadelphia-based restaurant Vedge, along with the plant-based street food eatery V Street, the vegan Philly cheesesteak shop Wiz Kid, and the globally-inspired Fancy Radish in Washington D.C., vegetables take center stage.

Landau’s goal all along has been not to appeal to vegans and vegetarians, but to omnivore diners. “People would rather have a great meal with vegetables than a bad meal with meat,” he said. But as far as old-school vegetarian restaurants went, he saw a need for improvement on menus that typically featured only sandwiches and salads.“That’s how vegetarianism and health food became synonymous. I saw this as an obvious opportunity to get my new vision for animal-free cuisine out there.”

At the “vegetable restaurant” Vedge, smoked eggplant plays the role traditional cuts of meat in braciola. Maitake mushroom is pan-seared like steak. A  reuben-inspired vegetable dish featured wood-smoked carrots served with housemade kraut, and pumpernickel. “Understating when textures are redundant or clashing, knowing what herbs and spices to use and not use together. This is all instinct and it’s the most important too you’ll ever have,” Landau said.

Each menu is specially curated to the theme of the restaurant, but all take the same vegetable-forward approach. Though Landau uses flavors and techniques that are used to prepare classic dishes, he says that he never wants to disguise plants as meat.

“We do use time-honored techniques so that people can understand that food is about flavor and not about flesh,” he said.“Take pastrami spice for instance. People automatically assume that we are trying to make mock or fake pastrami. Not at all. These spices and techniques are exclusive to cooking – not to meat. We are simply using spices and preparations that are (unfairly) associated with meat and applying them to vegetables.”

Jacoby, who develops the desserts, takes a methodical, almost scientific approach in which she considers the role that each ingredient plays in bringing together a dish.

“When I was first getting started, I would think about iconic desserts and find ways to make a vegan version, changing as little as possible. When I hit a roadblock like eggs or cream, I would think about what it contributed to the recipe, then try the simplest alternative that would achieve the right goal,” she explained. “Creme brulee is a perfect example. At its most basic, it’s 4 ingredients: cream, eggs, sugar, and vanilla. Coconut milk, sugar and vanilla are all simple. A bit of trial and error landed me at a simple combo of agar and cornstarch. Boom! I got nice silky, creamy texture without reinventing the entire wheel.”

She considers the seasonality of each ingredient when developing desserts for each restaurant, keeping in mind the “theme” of the restaurant. “I think something more sophisticated for Vedge and Fancy Radish, something bolder and more spirited for V Street, then something fun for Wiz Kid,” she said.“That means an elegant Hasselback Apple at Vedge complete with a rose hip caramel and hazelnut streusel, a fritter at V Street glazed with ‘honey mustard’ and stuffed with cranberry jelly and an ‘Apple Pickin” Cool Kid ice cream at Wiz Kid.”

When it comes to pairing wine with dishes, the certified sommelier considers building a sensory experience for diners. “To me, it doesn’t matter what ingredients you have at all. It’s all about the final mouthfeel and dancing of flavors. Tasting involves all the senses, really. So it’s the look, the basic tastes (high acid or residual sugar), the feel on your palette, definitely the smell, even the magic of the sound of popping corks or the crack of a beer can, the shake of a cocktail… And there’s thought involved too. I like to think about cultural influence and smart geography when I’m pairing,” Jacoby said.

Landau and Jacoby have also developed menus for a number of dinners outside of their restaurants. In 2009, they were the first chefs to serve a vegan dinner at the foundation’s headquarters and James Beard’s former home, The Beard House, in New York City. In December of this year, the couple will host yet another plant-based dinner at the famous venue, featuring their innovative vegetable-centric approach to dining with vegan rutabaga-based cheese accompanied by Philadelphia-style pretzels, “pastrami-spiced” carrot, and umami glazed maitake mushrooms.

At the upcoming SEED Food & Wine Festival, set to take place from November 7-11, Jacoby and Landau will host a plant-based dining experience featuring hors d’oeuvres and cocktails, followed by a five-course dinner paired with wine selected by Jacoby. As for what’s on the menu, Landau and Jacoby say, “We are working on sourcing right now. All I can tell you is that it’s going to be epic.”

The dinner of mouthwatering vegan cuisine is available exclusively to Special Seed Guests. For tickets to the event, click here. The full schedule of events and tickets are available on the event website, but to win free entry and a grand VIP festival package, join CLUBKINDLY and see here for details.