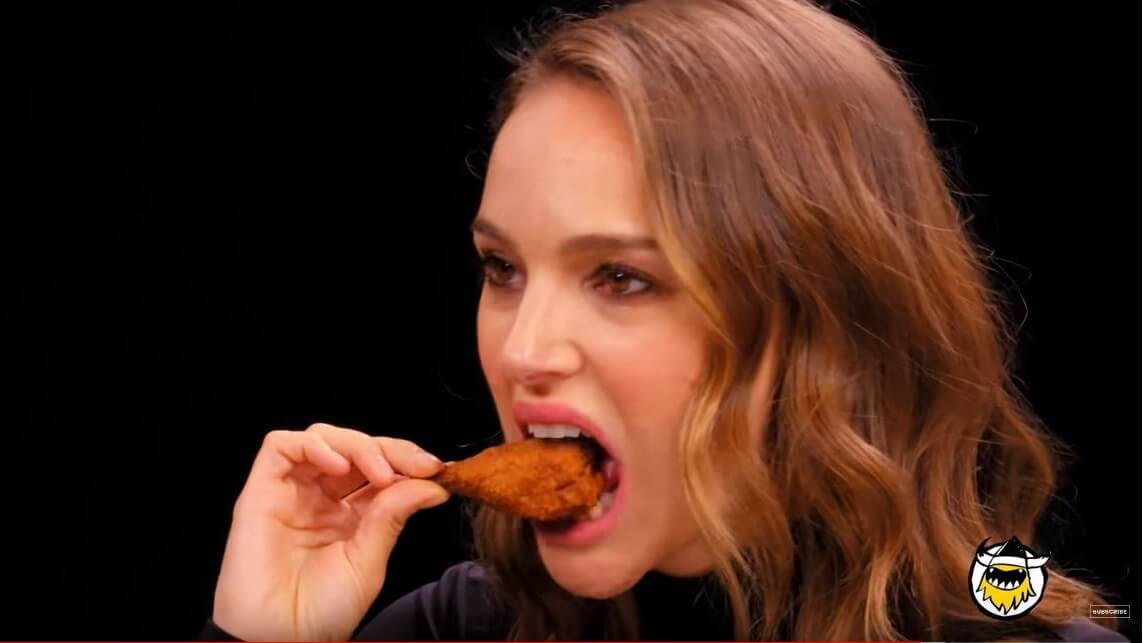 Two-time Golden Globe-winning actor, Natalie Portman, has discussed “Eating Animals,” a documentary she produced and narrated that explores the ethics of the food system. Portman spoke about the film that premieres today in an interview while eating vegan hot wings.

The “Hot Ones” interview is hosted by Sean Evans. Guests eat hot chicken wings while answering “hot” questions. In the interview, Portman discussed factory farming and sustainability, two key focuses in the documentary that arose from Jonathan Safran Foer’s critically acclaimed 2009 book of the same name.

“So I want to start by acknowledging the elephant in the room,” Evans teases to open the video and break the ice. “By watching the film it made me really consider the future of this show [that relies heavily on meat]. But that’s an existential crisis for another time. I am wondering though when you first read the book, what are some of the stats, the anecdotes, the facts that really stood out to you and inspired the new project, ‘Eating Animals’.”

“I think that I didn’t realize that most of our meat, dairy, eggs are from factory farms,” commented Portman. “That it’s not just an ‘oh, part of it [is factory farmed] and most of it is nice farms.’ It’s a vast majority.”

“And when you see what it does to the environment, like they’re spraying the pigshit up in the air that’s giving people all these respiratory diseases who live near pig farms. When you see the human impact, the environmental impact, and you just see that it’s having a huge impact beyond the animal suffering.”

“If everyone cut out meat, dairy, and eggs from one of their meals a day or from one day a week—if you could commit to that for yourself—that would make such a huge impact environmentally and with how many animals are put into difficult conditions,” Portman stated in the interview, during which she gulped down almond milk to cool the burn of the spicy hot wings.

Portman’s interview adds to a widespread discussion about the food system. As animal agriculture is increasingly linked to pressing environmental and health issues,  plant-based diets have been hailed as solutions to mitigating climate change, improving public health, and addressing world hunger issues.