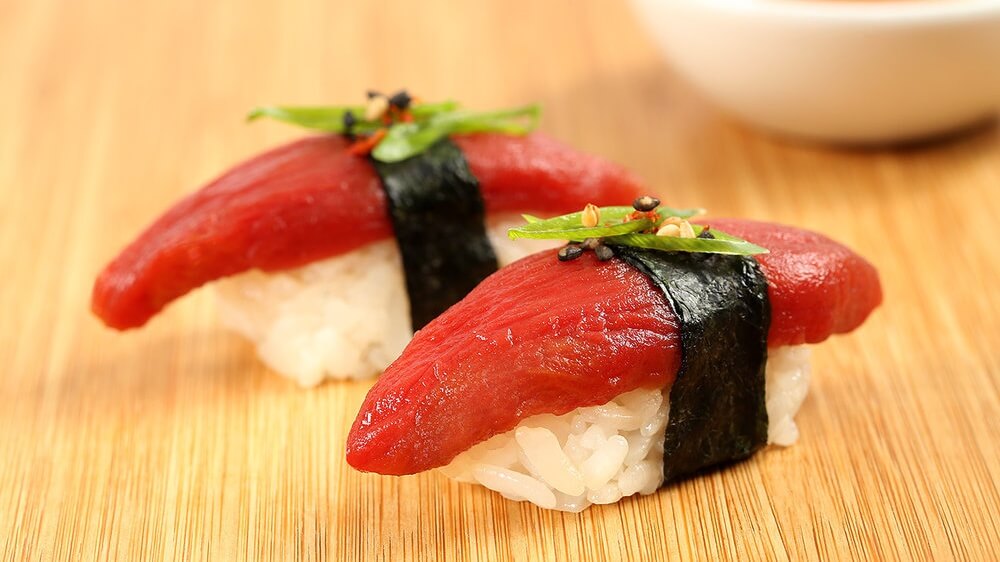 Vegan tuna made from tomatoes is now available on the menu of all 12 locations of the US sushi chain, Blue Sushi Sake Grill.

Called “Ahimi” and made with Roma tomato, soy sauce, and sesame oil, the product is said to resemble the raw cuts of fatty tuna fish used in sushi and sashimi.

The innovative vegan tuna is made by the NYC-based vegan seafood company, Ocean Hugger Foods. The brand announced the launch of its plant-based tuna in the sushi restaurants on social media earlier this week: “We’ve got some SUPER exciting news! #Ahimi is now on the menu at all 12 @bluesushisakegrilllocations in CO, KS, KY, IL, IN, NE, and TX!”

According to Ocean Hugger Foods, the launch extends Ahimi’s availability to four new states and seven new cities throughout the country. The vegan tomato tuna is also served at the sushi counter of select Whole Foods Market locations as well as some smaller, independent shops across the US and Canada. From the New York Times to the Huffington Post, its authentic flavor has received positive reviews from a number of major publications.

#Ahimi tip from @veganbostoneats: “Feel free to customize your own rolls at the sushi bar! They don’t always have the Ahimi sushi pre-made but are happy to make your rolls per request.” She made her Ahimi combo with quinoa @wholefoods in Brighton. ???

“We have a lot of fun getting creative with our ingredients and are proud to have an extensive selection of vegan and vegetarian maki options, so when we were introduced to Ahimi, we were excited to work with it and add it to our menu,” said Tony Gentile, corporate executive chef and owner of Blue Sushi Sake Grill.

Over the past year, Ocean Hugger Foods has worked with leading foodservice provider Aramark in order to make its vegan tuna available to corporate cafes and schools across the country.

Last August, the company partnered with vegan meal delivery service Veestro to launch an “Ahimi Sushi Bowl,” featuring the plant-based tuna as well as Japanese produce such as daikon, edamame, and seaweed.

Founded in 2015, Ocean Hugger Foods aims to create a sustainable alternative to seafood at a time when the world’s oceans are in critical danger; according to a study published in the journal Nature, 90 percent of the world’s large predatory fish, including tuna, have been depleted by overfishing.

The disruption of the delicate ecosystem spells an environmental catastrophe, according to Captain Paul Watson, founder of the international ocean protection organization Sea Shepherd. “Unless we stop the degradation of our oceans, marine ecological systems will begin collapsing and when enough of them fail, the oceans will die,” he said. “And if the oceans die, then civilization collapses and we all die.”

Looking to the future, Ocean Hugger Foods aims to take Ahimi tuna to international markets through a partnership with Tokyo-based wholesaler Nishimoto.