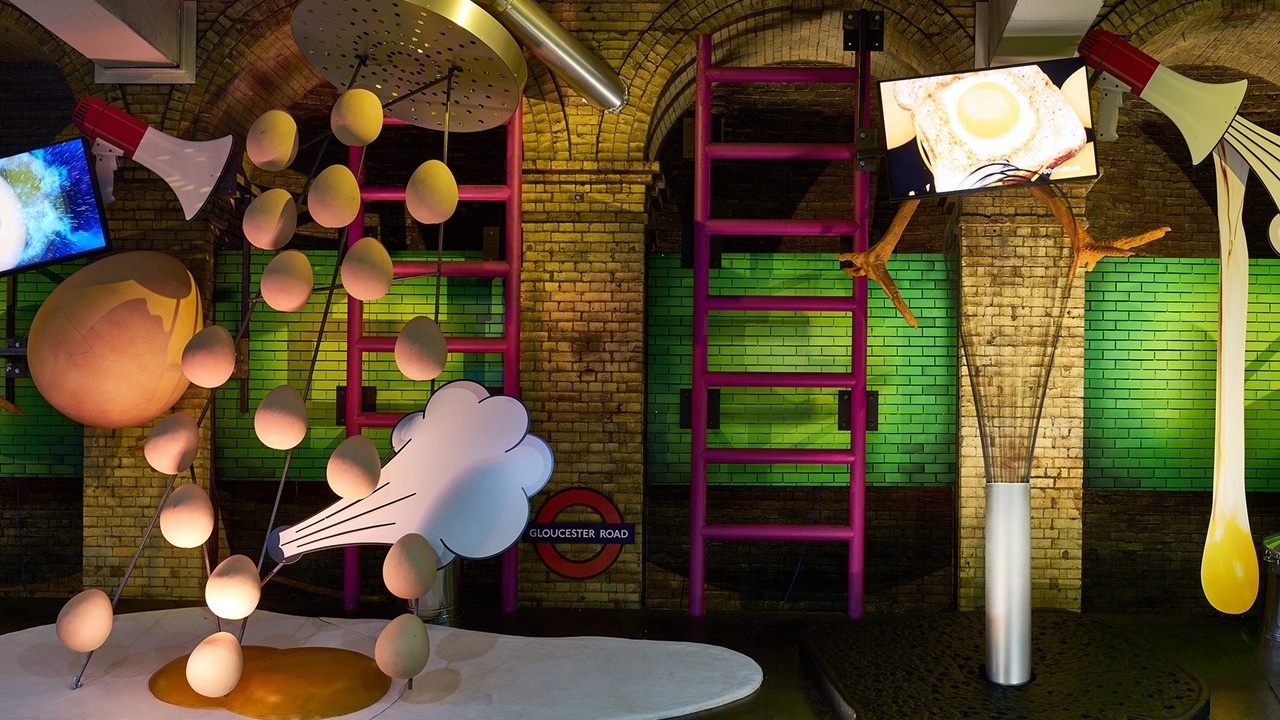 Multi-medium artist and poet Heather Phillipson brings her vegan ethics into many of her works. The Guardian reports that the UK-based artist currently has a solo art installation at London’s Gloucester Road tube station that uses giant eggs to highlight several contemporary issues.

The installation, called “My Name is Lettie Eggysrub,” features sculptures such as four-metre high 3D eggs, a giant automated whisk, and various 65-inch screens and suspended images or low-fi videos of that display egg sandwiches, diagrams of chicken fetuses, eggs being cracked or whisked, and some conceptual images. Complementary work is also displayed on the escalator panels at the Notting Hill Gate and Bethnal Green stations. According to Phillpson, the displays are intended to provoke thought about the egg industry: “There are all these forms of torture we subject eggs to and I wanted to remind people that these are potential lives.”

The human relationship to animals is a regular feature of Phillipson’s work, as the artist believes that humankind has much to learn from other species.

Head to Notting Hill and Bethnal Green station to see escalator panels by Heather Phillipson. A continuation of her work ‘my name is lettie eggsyrub’ at Gloucester Road which launched earlier this month @h_phillipson pic.twitter.com/MTdGHZfjwa

Phillipson was raised vegetarian, but went vegan 15  years ago, “before it was fashionable and when it was pretty hard and widely mocked.” Much of her work, which includes blends of sculpture, video, poetry, music, and sound, features dismal or apocalyptic themes and cultural references. One of her upcoming installations, “The End”, will feature a dollop of whipped cream topped with a cherry, a fly, and a drone. Phillipson says that she chose cream because it is seen as a “luxury item that has the potential to collapse at any minute,” yet it remains stable, an allusion to our current society. It is slated to appear on the fourth plinth in Trafalgar Square in 2020.

“In some ways, I’d like things to be even less stable,”  said Phillipson. “Things appear to be on the verge of collapse, but they never quite do.”

“A lot of my recent work has felt quite apocalyptic,” the artist said. For her next show, the Age of Love, she aims to bring forth a more positive message.“There’s been this sense of unease, as if we’re building towards some terrible climax, and it all started to feel quite despairing. So, for this show, I wanted to drag it somewhere that felt a bit more optimistic.”