Bios are a telling feature on anyone’s Instagram account. One can cite a meaningful quote, make a witty comment, professionally state their job title, or simply list off their favorite things. For vegan athlete Lewis Hamilton, his 6.6 million followers now know his conviction in the vegan lifestyle is well-grounded due to the recent addition to his bio:  “Plant-Based Diet. Love Animals.”

Hamilton adopted a plant-based diet for his health last year, but he recently seems to have placed an increasing amount of thought into the ethical side of the diet. His former bio read, “Constantly searching for my purpose, for adventures, for open-mindedness and positivity,” but the addition of the seedling emoji and “Love Animals” makes his purpose clear.

In another effort to promote a positive message of the benefits of eating plant-based, Hamilton updated his Instagram story with video clips of his day at a golfing range with friends. Hamilton first dined on a hearty plant-based feast, complete with a variety of vegetable-packed vegan meals – the perfect nourishment for a celebrity athlete taking on the golfing range and displaying his chiseled physique. 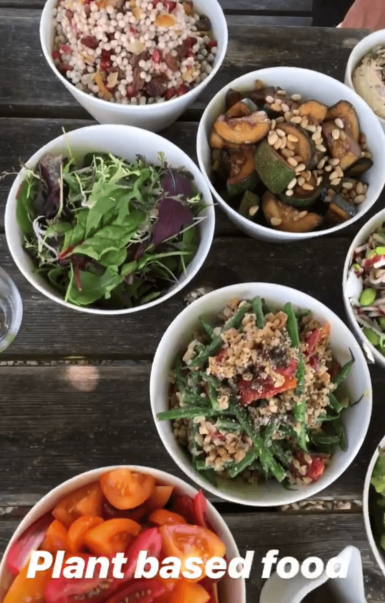 Included in the banquet of all things vegan was slow-cooked zucchini with toasted pine nuts alongside a couscous, pomegranate, raisin, and orange peel salad. Hamilton also chowed down on orzo pasta with steamed green beans and sundried tomatoes, a unique guacamole dip, a sprouted grain mix, and hummus with vegetable crudites. Accompanying the balanced table spread was fresh cherry tomatoes and healthy spring greens, bringing nutrients and antioxidants to properly fuel this plant-powered athlete. 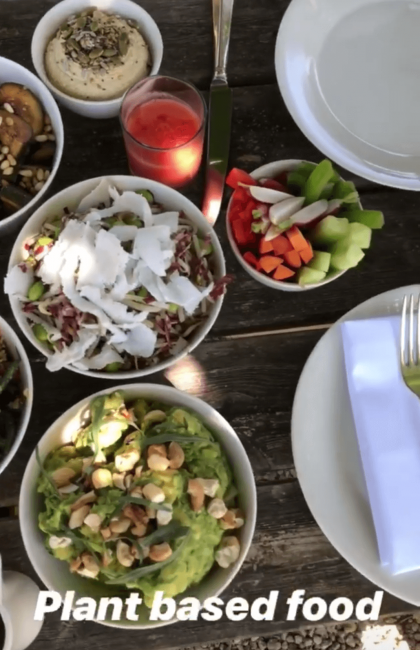 Hamilton used his plant-based energy to smash golfing targets, having some fun and showing off his impressive athleticism. But golf is just a hobby of Hamilton’s, no matter how impressive his precisely-executed swings are. Hamilton primarily works in Formula One racing and recently added another prestigious achievement to his repertoire. Just days ago, Hamilton dominated the French Grand Prix, not only winning the race but finishing a full seven seconds ahead of the second place competitor. True to his new Instagram bio, the racer credited his win and overall racing success to his vegan diet.