Muscle Food is selling “make your own” vegan bacon kits.

The brand says simply soak the slices in the sauce in the fridge for about 30 minutes and then place in the oven for around 15 minutes. The result is crispy vegan bacon-like parsnip strips. They have all the same taste and flavor as regular bacon, but without the health consequences.

Processed meat, including bacon, is classified as a Group 1 carcinogen by the World Health Organization (WHO). Placing the food in this category—which also includes tobacco and asbestos—means that there is sufficient evidence that it causes cancer.

According to WHO, consuming just 50 grams of processed meat a day—the equivalent to two rashers of bacon—can raise the risk of bowel cancer by 18 percent over the course of a lifetime. The more bacon you eat, the higher your risk. Cancer Research UK notes that if nobody in the country ate processed or red meat, there would be 8,000 fewer cancer cases per annum. 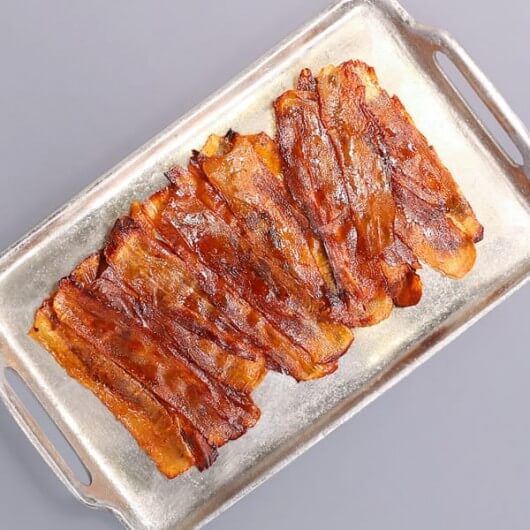 Muscle Food’s Crispy Facon is made with parsnip.

‘A Fresh and Healthy Alternative’

But Brits don’t have to give up the food they know and love. Vegan bacon can be found in a number of supermarkets, including Waitrose and Sainsbury’s, and now Muscle Food.

“It can sometimes be hard for Brits who want to cut down their intake of animal products to get over the hurdle of giving up foods they’ve grown fond of over the years,” said Amy Kershaw, the head of product innovation at Muscle Food, in a statement. She added, “a comforting bacon butty or a filling fry up are staples of our national cuisine.”

“Our new completely plant-based bacon kit means that you can enjoy a fresh and healthy alternative to real bacon, without fuelling concerns about harming animals or the planet,” she continued. “By following a few simple steps provided with the ingredients, home cooks can turn humble parsnips into tempting vegan bacon ready for the breakfast table or other meals.”