The brand is famous for its cookie dough-flavored ice cream, which was first launched in 1991 after a customer in its Burlington Scoop Shop suggested it would be a good mix with vanilla ice cream. In February, it launched a vegan version of the popular treat, much to the delight of dairy-free consumers.

“Ever since we introduced nondairy in 2016, our fans have been clamoring for more,” said Sarah Fidler, a flavor guru for the ice cream giant. “The biggest challenge this time was creating a chocolate chip cookie dough flavor that stood up to the original. I think we nailed it.”

Now the company is giving fans something a little extra. Just the vegan cookie dough pieces, without the ice cream. 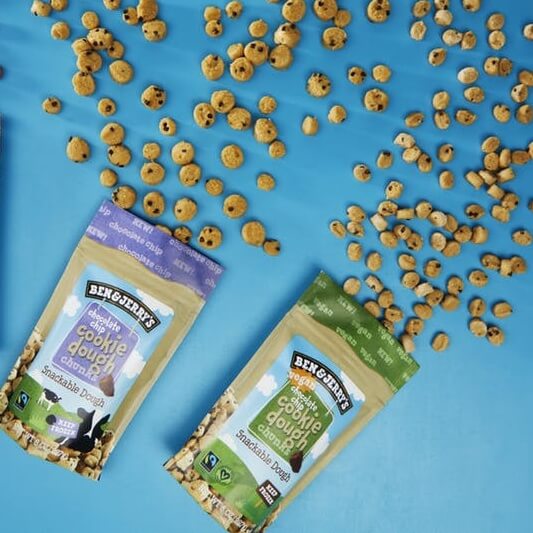 According to Brit, Just the Dough pieces were initially launched in Vermont last year, in dairy chocolate chip and peanut butter flavors. Ben & Jerry’s has now opted to expand the products nationwide, adding a vegan chocolate chip version into the mix too. “It’s certified by Vegan Action, so you can rest assured it’s the real deal,” the publication notes.

It adds that you simply snack on the pieces by themselves, or if you fancy it, add them to a pint of ice cream. As well as Chocolate Chip Cookie Dough vegan ice cream, Ben & Jerry’s offers ten other dairy-free options, including Chocolate Caramel Clusters, Peanut Butter Half Baked, and Cinnamon Buns.

The dairy-free market is booming in the United States, with nearly half of American consumers regularly opting to purchase vegan milk for health, environmental, and ethical reasons.

Like Ben & Jerry’s, a number of brands have responded to this rising consumer demand. Even Nestlé is onboard; earlier this month, it was revealed that Nestlé Toll House was launching vegan white chocolate chips. Marketing Director, Haig Basmadjian, said in a statement, “we believe the exceptional taste of Nestlé Toll House should be enjoyed and shared by everyone.”

Ben & Jerry’s new vegan chocolate cookie dough pieces will be available from retailers and Scoop Shops across the United States.