For months we’ve waited for it. We’ve cried, we’ve tweeted, we’ve ranted, we’ve even watched a few YouTube videos of American people trying it. (We’re not really sure why, how on earth is watching other people enjoy something you can’t have fun?!) But it’s finally happening, it’s almost here. Ben & Jerry’s have announced that they’re bringing their dairy free flavours to the UK.

After discovering earlier this month that another major ice-cream brand, Häagen-Dazs, was also now offering vegan options, but again only on the other side of the Atlantic UK vegans were in a bit of a sulk. Sure we’ve got Alpro and Booja Booja but nothing quite beats the beautiful stomach ache after consuming an entire tub of Ben & Jerry’s to yourself on a Saturday night. Don’t get us wrong, vegans don’t mind turning down a tub of cow’s milk ice-cream but when you’re having the ethical, certified vegan alternative dangled in front of your noses with not even a hint that we might have something to look forward to it can get a little upsetting. 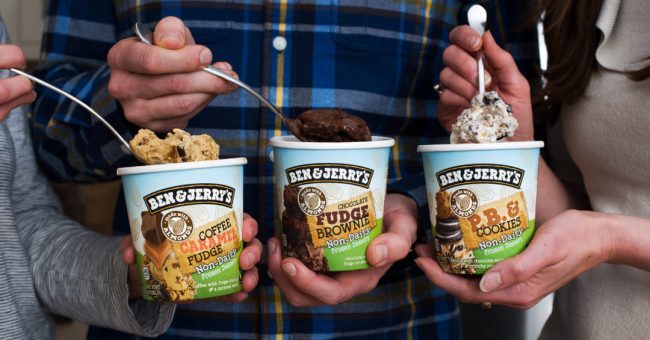 Still keeping their cards close to their chest (apparently they’ve been working on it for some time, they could have told us!) they have yet to release the flavours that vegans of the UK will be able to purchase really soon. They’ve not even given us an exact date but a promise is all we need.

We imagine we won’t be let down with the US range already containing seven delicious flavours including the classics Chocolate Fudge Brownie, Cherry Garcia and Funky Monkey. Ben & Jerry’s have been nice enough to promise us ‘enormous chunks and delicious swirls’ but they’re history of coming up with creative and innovative flavours mean the possibilities really are endless.

What we can assume is that the ice-creams, like their American equivalent, will be almond milk based.

Ben & Jerry’s are well known for their commitment to operating in the most sustainable way possible. Although we know that their other ice-creams, made from cow’s milk, are hardly environmentally friendly, the brand’s choice to include dairy free alternatives could be a sign that they understand the environmental cost of cow’s milk. Their brand has certainly had a new lease of life with the attention it’s been receiving from the vegan community in the past few months.

If their dairy free ranges prove popular, could Ben & Jerry’s eventually make it’s way to being a plant-based business?