You can now get vegan Ben & Jerry’s ice cream with your Papa John’s pizza.

Earlier this year, the chain added three vegan pizzas to its UK menu with huge success. Its vegan cheese — supplied by Bute Island Foods — sold out within the first 24 hours, as customers overwhelmingly embraced the new option.

Papa John’s responded to demand by adding vegan cheesy wedges to the menu and another vegan pizza option, this time, topped with meatless hot dogs and dairy-free mustard. Now — for the ultimate indulgent dessert — customers can add vegan ice cream to their order.

The popular pizza chain — which has more than 350 stores across the UK — added Coconutterly Caramel’d by Ben & Jerry’s to its ever-expanding vegan menu. According to Ben & Jerry’s, the ice cream is the “perfect balance of coconutty and caramelly vegan and Fairtrade Ice Cream, swirled with caramel & cookies and boldly loaded with chocolatey chunks.”

“It’s our swirliest vegan concoction yet,” says the ice cream brand. “Ben & Jerry’s euphoria in every bite…just without the cow.” 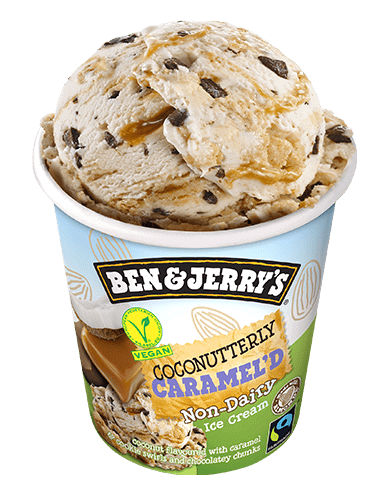 Across the UK, more and more restaurant chains are adding vegan options to the menu. Like Papa John’s, Pizza Hut now serves a vegan menu, complete with jackfruit-topped cheesy pizza and cinnamon bites.

The boom in plant-based menu options comes in response to consumer demand. According to a survey conducted by Sainsbury’s earlier this year, around 91 percent of Brits now identify as flexitarian and are trying to reduce their intake of animal products for the sake of their health, the animals, and the planet.

Animal agriculture has an enormous impact on the environment, with its greenhouse gas footprint rivaling that of “every car, truck, bus, ship, airplane, and rocket ship combined” reports the United Nations.

According to Kantar Worldpanel, throughout 2018, Brits ate around 150 million more veggie dinners than during 2017, and the number is expected to keep growing.

“Looking back on 2018 as a whole, one of the most notable consumer trends is the shift to a more plant-based diet,” said Kantar Worldpanel’s head of retail and consumer insight Fraser McKevitt.