The fast-food chain followed up on the success of the Beyond Famous Star by introducing a cheeseburger made with Beyond Meat earlier this month.

According to the press release, the new Beyond BBQ Cheeseburger features the Beyond Burger served on a sesame seed bun, dressed with barbecue sauce, American cheese, and onion rings. According to the brand, the new burger is an “indulgent flexitarian” take on its Western Bacon Cheeseburger. 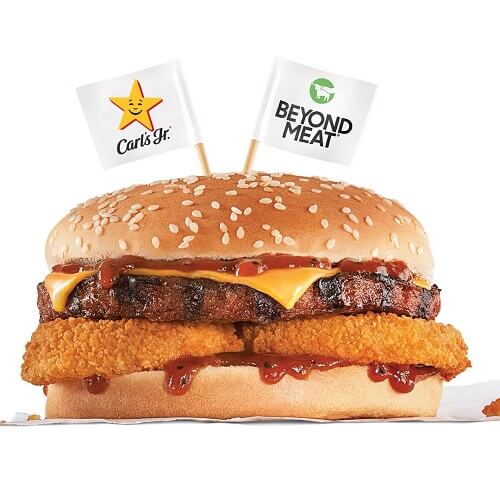 The barbecue sauce, the patty, and bread are vegan, but neither the cheese nor the onion rings, which contain whey, are. Carl’s Jr. fries are vegan, so maybe swap the onion rings for some french fries. While the fast-food chain opted to offer American cheese, there are vegan options that the company could have picked from.

Follow Your Heart and Daiya both make vegan American cheese slices. New innovations in food tech may soon lead to American cheese that’s nearly indistinguishable from the real thing. San Francisco-based startup Perfect Day is able to create whey and casein — proteins found in dairy milk — without the cow. The company tested it out in a batch of limited-edition vegan ice cream this summer, but co-founders Ryan Pandya and Perumal Gandhi say they want to make cheese as well. The company recently entered a partnership with global ingredients giant ADM, which may help it scale up production, potentially making realistic vegan cheese available to fast-food chains. 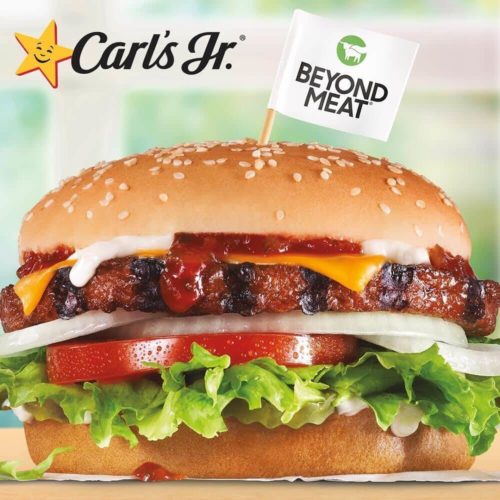 The popular vegan Beyond Meat Beyond Burger made its U.S. fast-food debut at Carl’s Jr. last January in the Beyond Famous Star.

“We know people are looking for options – in fact, roughly one-third of consumers identify as flexitarians – and we’re thrilled to partner with Beyond Meat to bring more delicious, irresistible flavors to our menu,” Jason Marker, CEO of Carl’s Jr. parent company CKE Restaurants, said in a statement. “The new Beyond Famous Star is a true industry game changer, and we’re proud to add it to our roster of innovative offerings and build on the legacy of mouthwatering flavors.”

Carl’s Jr. is best known for its open flame charbroiling method, which it gives to the vegan Beyond Meat patty.

“I have long looked forward to the day when my kids can go to a major fast-food chain and order The Beyond Burger. I am grateful to say that that day has arrived,” said Ethan Brown, Beyond Meat Founder and CEO.

“At our core, Beyond Meat is about enabling consumers to Eat What You LoveTM, and there is no better example than being able to enjoy a delicious Carl’s Jr. burger, while receiving the added health and sustainability benefits of the plant-based Beyond Burger,” Brown continued. “It is with innovative and forward-looking partners, like Carl’s Jr., that we are building a brighter and more sustainable future.”

The launch marked the largest number of restaurant locations in one chain for Beyond Meat; the Los Angeles-based Carl’s Jr. operates nearly 1,500 locations in the U.S. and across the globe. Last August, the Beyond Famous Star launched in all 21 Canadian locations.