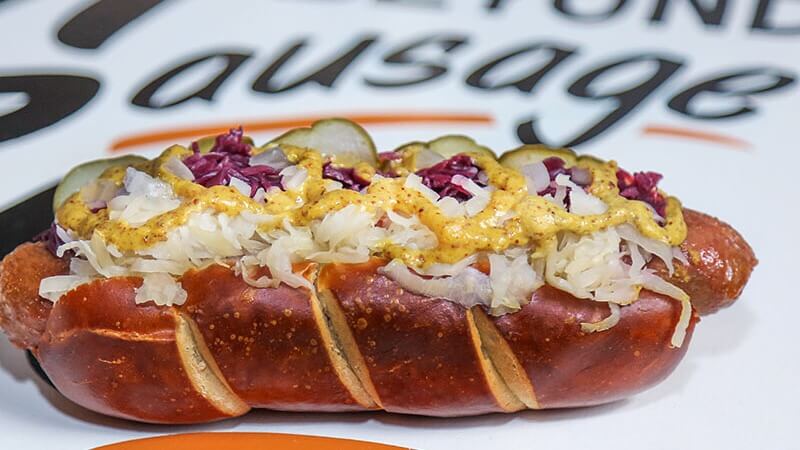 Beyond Meat, the brand that brought consumers the wildly popular cruelty-free Beyond Burger, is making a new product: Beyond Sausage. Time Magazine recently named the new vegan sausage product one of 2018’s “Best Inventions.”

Alejandro De La Garz reported that the brand’s sausage “tastes surprisingly close to the real thing.” The sausages are the first products released after the brand’s flagship Beyond Burger that looks, cooks, and tastes like a beef burger.

The sausages too have the mouthfeel, taste, and “snap” of a pork sausage. The snap comes from the algal casing.

Earlier this month Green Common, the Hong Kong grocery and cafe chain that launched the vegan Beyond Burger into the Asian market last year, “is now the first retailer outside of the U.S. to carry the brand’s range of Beyond Sausages.” The chain’s six locations stock the sausages.

Need a Monday pick-me-up? Gourmet sausage concept, @DogHausdogs, is adding #BeyondSausage to their menus nationwide! Customers can enjoy both the Beyond Brat and Beyond Hot Italian Sausages in two mouth-watering builds. ____________________ Click the link in our bio to learn more about this exciting launch & don't forget to share your drool-worthy pic on social, tagging @BeyondMeat, @doghausdogs and #BeyondSausage for a chance to be featured ?

In the past few years, Beyond Meat’s Beyond Burger, a burger patty made from plant oils and proteins, earned spots on a number of meaty restaurant menus. LIVEKINDLY has reported that the business created the “bleeding” Beyond Burger to shift “from animal, to plant-based meat.” By doing so, the company hopes to “positively and significantly impact 4 growing issues attributed to livestock production and consumption: human health, climate change, natural resource depletion, and animal welfare.”

Beyond Meat is growing in other ways, too. Earlier this year, the vegan meat company received the United Nations’ “Champion of the Earth” recognition for creating a sustainable alternative to beef.

In October of this year, LIVEKINDLY reported that the California-based business announced that it was planning to go public; that move made it the first vegan meat producer set to launch an IPO.

According to CNBC, “The nearly $30 billion processed meat industry last year grew by 2 percent, while the $1.4 billion meat alternatives industry grew by 22 percent, according to data service Euromonitor.”