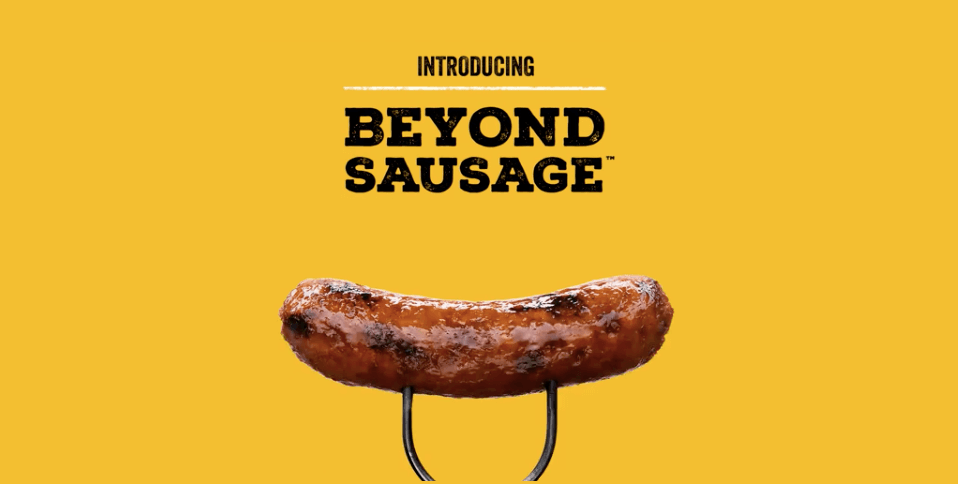 In an epic Instagram tease, Southern California-based Beyond Meat told its followers that its recently launched vegan Beyond Sausage will be appearing in Los Angeles soon.

“LA! Can you guess where #BeyondSausage is launching next week? Countdown starts now‼️”

The company launched the vegan sausage late last year at its Whole Foods Boulder, Colorado, restaurant. At the time, the company said it was still ramping up production for a national launch.

The Beyond Meat vegan sausages then made their debut in Manhattan last week at Schaller’s Stube Sausage Bar on the Upper East Side — the first location outside of the Boulder restaurant.  Schaller’s Stube is a traditional sausage bar serving a variety of animal-based offerings.

LA! Can you guess where #BeyondSausage is launching next week? Countdown starts now‼️

And while Beyond Meat hasn’t specified where in the sprawling metropolis of Los Angeles it will be launching its latest creation, there are quite a few sausage bars in LA — from the already vegan-friendly Berlin Currywurst, Wurstküche, Wirtshaus, and Link N Hops. It could also make an appearance at omni- and vegan-friendly destination, Mohawk Bend, which recently debuted the Impossible Burger. It could also make its first West Coast appearance at Veggie Grill — the Santa Monica-based vegan chain where Beyond Meat first launched its Beyond Burger.

The Beyond Meat Instagram post quickly filled with guesses and comments from excited fans eager to get a taste of what’s sure to be a new best-seller for the brand.

Wherever it lands, just don’t let it sell out!,” Instagram user @markandremy commented.

But Beyond Meat products do tend to sell out, especially after a new launch. The company has experienced tremendous success with its vegan Beyond Burger, which was recently added to the menu at TGI Fridays. High profile investments from companies like Tyson Foods and celebrities like Leonardo DiCaprio have helped elevate the brand to superstar status in its own right.

While many vegan sausage products are already available on the market, Beyond Meat says that like its Beyond Burger, its created a product that’s nearly indistinguishable from meat, delivering consumers all the flavor, texture, and function of animal-based sausage.

The new vegan Beyond Sausage is made from pea protein and faba beans, and gets its traditional sausage “snap” from casing made from an alga. Like the Beyond Burger, the Beyond Sausage looks, cooks, and tastes like animal-based offerings but offers a healthier and more environmentally-friendly profile.