Birkenstock, as we know it today, is a 20th-century product, but the brand was founded by German shoemaker Johann Adam Birkenstock in 1774. Two generations later in 1886, his grandson Konrad Birkenstock developed the contoured sole that the shoe brand would become famous for. The family continued to improve its footwear while working in Germany, establishing itself as a trusted brand.

In 1963, the iconic comfort brand launched the sandal that started it all: the Madrid. Designed with the natural shape of the foot in mind, Birkenstock’s signature style has sold millions worldwide and is still going strong.

Birkenstock took off in American culture during the midst of the cultural revolution of the 1970s, where it was embraced by the granola and flower child crowd. Or, as the brand history puts it, “Birkenstocks are highly valued by nature and health enthusiasts up to now.”

It’s because of its earlier hippie fandom that Birkenstocks tend to be associated with the liberal crowd.

A 2006 article in the New York Times titled “Thank You for Insulting Our Sandals” put it succinctly: “Though real Birkenstock wearers may come in all political persuasions, using the sandal to represent the pushier side of liberalism is a long-running joke.” 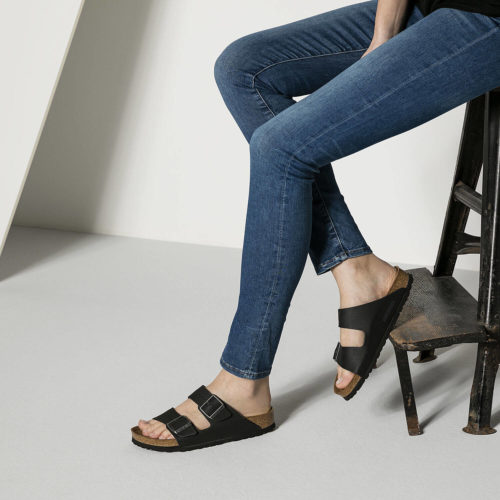 Scott Radcliffe, the marketing director at Birkenstock Distribution USA, said that the company is in on the joke: “To me, a Birkenstock fan looks at that, laughs and is not alienated.”

The 2005 movie “Thank You for Smoking” even featured Birkenstock sandals on the feet of the anti-smoking, environmentalist Democratic Senator Ortolan Finistirre, played by William H. Macy — he wears them with thick white socks.

“Nothing says, ‘I want to tell you how to live your life’ more than Birkenstocks,” joked director Jason Reitman. “The visual registers immediately. There’s something about the shoe that is universally understood that makes it so funny.”

Although Birkenstock is lovingly made fun of in popular culture, it’s overall success in the American market has helped it become the global brand that it is today.

In recent years, Birkenstock has experienced a resurgence in popularity among younger consumers — again, in the health and wellness crowd — which may explain why a brand known for its leather shoes has steadily built its vegan styles. Several studies highlight that Millennial and Generation Z consumers are seeking more ethical, environmentally-friendly purchases in all aspects of life.

“After all,” Radcliffe said, “the brand’s strong point is its power to elicit both positive and negative reactions. That speaks to the bigger cultural relevance of the brand. That’s something I want to participate in. That’s not something I’m trying to shake.”

Although it’s best known for its leather shoes, Birkenstock offers a wide range of vegan leather sandals, catering to the growing demand for cruelty-free alternatives to the animal-based material.

According to data from Grand View Research, the vegan leather market is set to reach $85 billion worldwide by 2025. Study authors noted that growing awareness of the treatment of animals in the leather industry is driving consumers to make the ethical decision to eschew it in favor of faux — apple peel, pineapple fiber, mushrooms, and corn represent some of the new, more sustainable materials that have gained mainstream attention in recent years. Pineapple leather was recently used by global fast fashion retailer H&M in its new Conscious Exclusive collection.

“We’re thrilled to introduce new plant-based sustainable materials to create high-performing, beautiful and fashionable pieces that are statement-making yet so easy to wear,” said Ann-Sofie Johansson, Creative Advisor at H&M.

Leather is also damaging to the environment due to the chemicals used, which may be driving the popularity of vegan shoes. Speaking about the conditions of a town polluted by a nearby tannery, a lawyer for China’s Centre for Legal Assistance to Pollution Victims told The Huffington Post, “A few years ago, villagers could swim in the river. Now they get blisters on their hands and feet from touching the water. … When you stand close to the river you can smell rotting flesh because the leather factory dumps its sewage, made up of animal skin and meat, untreated into the river.”

Footwear accounts for only a portion of the data, but vegan shoes are one of the most popular fashion buys. Shoes make up 73 percent of vegan fashion buys, according to a recent study from retail technology and data company Edited.

Birkenstock has offered a vegan version of its iconic Madrid shoe to European customers since 2015 as well as a few other styles.

“The vegan ideology incorporates the intentional use of synthetic and natural products to create an entirely animal-friendly line that delivers the reliability and style combination that’s come to be expected of the Birkenstock shoe,” states the website. 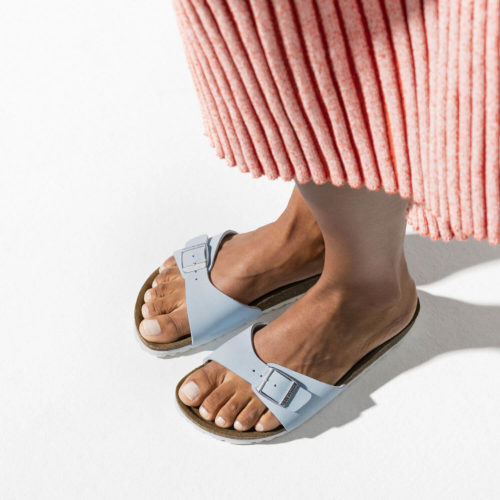 The German footwear brand has earned multiple awards from chapters of the international animal rights group PETA (People for the Ethical Treatment of Animals), including “Best Women’s Shoe” in 2016 and “Most Animal-Friendly Shoe Company” in February 2018.

“Many of our customers consciously lead a vegan lifestyle and are committed to animal rights. For them we have developed a range of animal-free products that nonetheless guarantee the comfort for which Birkenstock is renowned,” Oliver Reichert, CEO of the Birkenstock Group, said in 2016.

In January 2017, Birkenstock announced that it would launch vegan shoes in its signature styles in the U.S. in response to consumer demand. One year later, the brand expanded its offerings with new styles and colors.

What Are Birkenstock’s Vegan Shoes Made From?

Birkenstock uses a house-developed material called Birko-Flor to make its vegan sandals. According to the website, Birko-Flor is a high-quality synthetic material consisting of two parts. The upper is PVC, which has a leather-like feel and can be dyed multiple colors while the inside is lined with a soft, breathable vegan fleece. 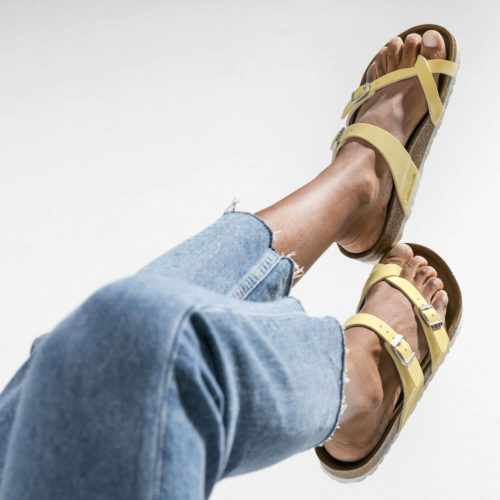 The footbed is made from a blend of cork and latex while the sole is EVA (ethylene-vinyl acetate), a scuff-resistant material that cushions and supports the feet. Like all Birkenstock shoes, the footbed of the leather-free version is contoured to match the shape of your foot. Rather than throw your shoes in the washing machine, your vegan Birks should be cleaned with a soft, damp cloth.

Birkenstock acknowledges that its brand has never erred on the side of high fashion. But this season, “tourist sandals” — the chunky, clunky, comfy shoes oft-worn with socks by older vacationers — are in. Designers that have embraced the trend include Prada, Miu Miu, and Anna Sui, but Birkenstock has been ahead of the “ugly” chunky sandal trend since its creation.

Here are 11 unisex vegan Birkenstocks that channel the trend. 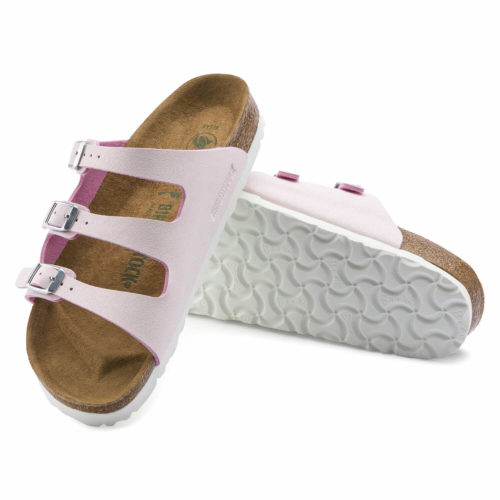 This strappy pink vegan leather sandal totes Birkenstock’s signature comfort that you can dress up or down. 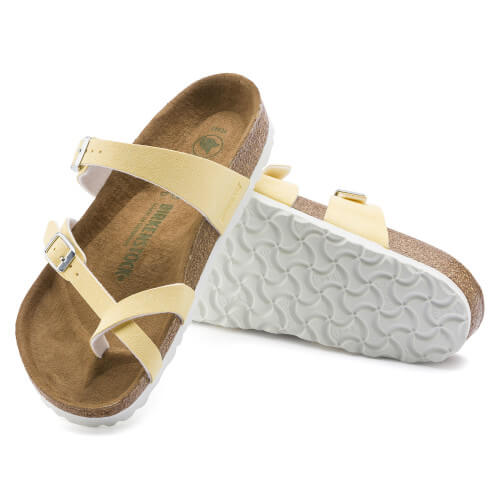 The Mayari style is comfortable and chic

Featuring a toe loop and adjustable strap, the Mayari style is an elegantly comfortable vegan sandal that can confidently be worn with anything. 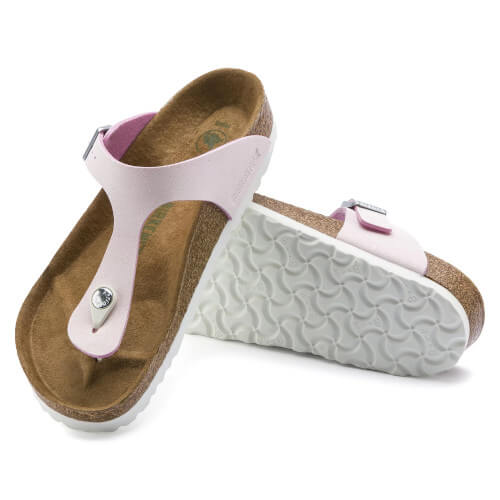 The vegan Gizeh sandal has a modern and minimalist style

This modern thong-style sandal delivers refined, minimalist style. Pair it with jeans and a tee-shirt, swimsuits, and summer dresses. 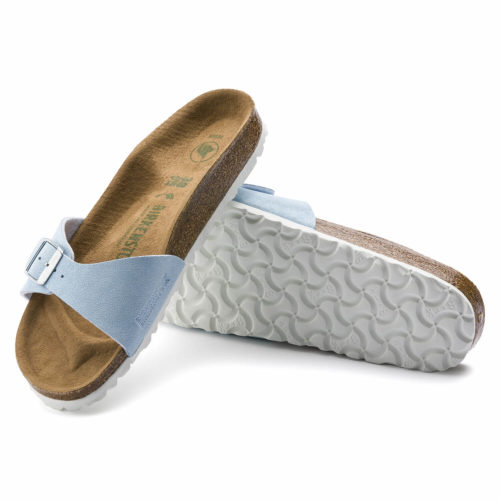 The Madrid was Birkenstock’s first style

Modeled after the original Birkenstock sandal, the Madrid spring style consists of a sky blue vegan leather strap and a sleek buckle over a contoured cork footbed for a chic, minimalist style. 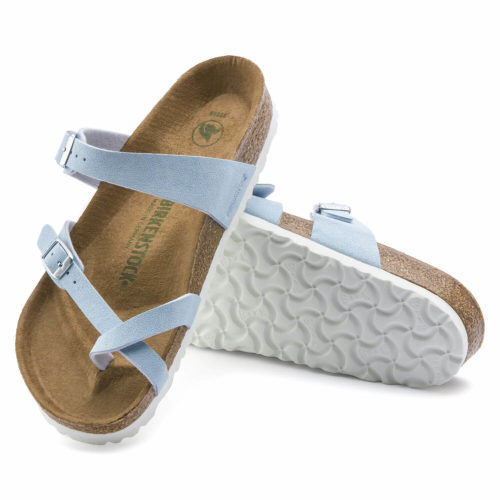 Sky blue sandals are perfect for spring and summer

The baby blue sibling to the shoe above is just as versatile and flattering for all skin tones. 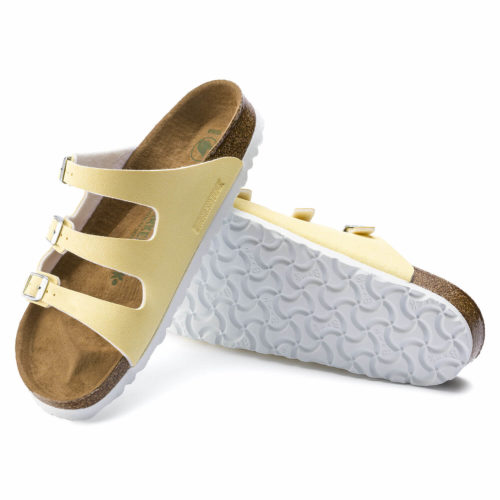 These strappy vegan leather sandals are comfortable and stylish

Whether you’re spending time in the sun or heading to brunch, the vegan Florida Fresh style spells “comfort.”

7. Sydney Vegan in Pull Up Stone 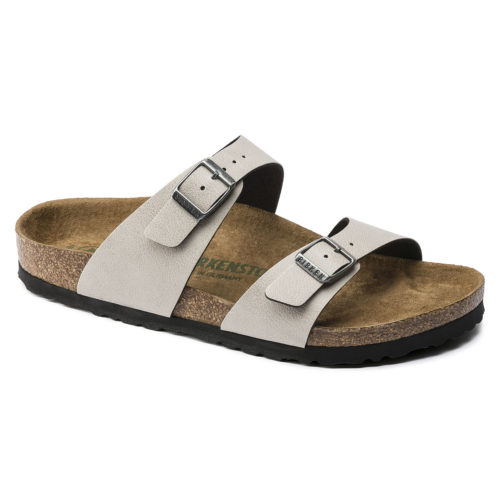 Part of Birkenstocks’ Papillio Collection, this leather-free sandal features two simple straps to keep your feet in place through all your summer adventures.

8. Madrid Vegan in Pull Up Olive 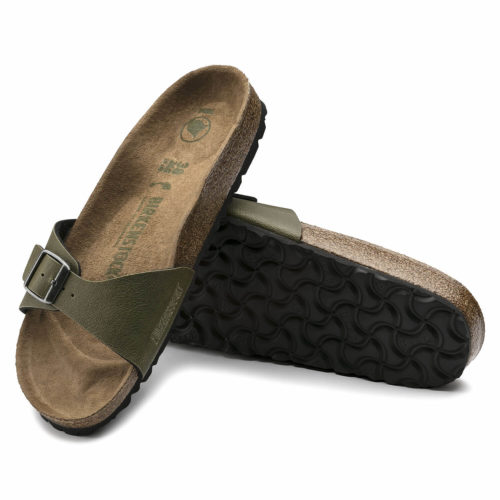 These dark olive vegan sandals are versatile and comfortable

The Birkenstock Madrid style is one of the brand’s most popular styles. This classic features a single vegan leather strap that keeps your feet snug and secure.

9. Mayari Vegan in Pull Up Anthracite 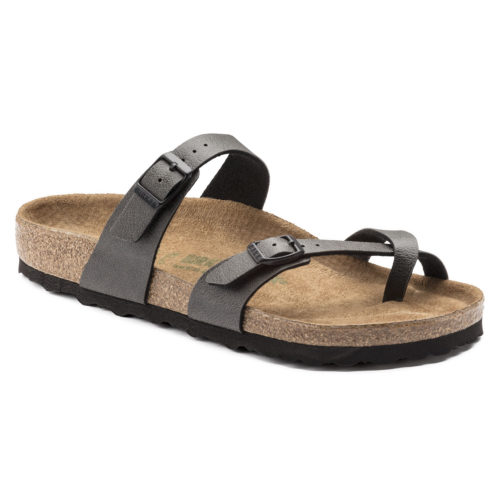 These sandals match anything

If spring pastels aren’t your thing, then the Mayari Vegan in Pull Up Anthracite has you covered. This neutral sandal goes with just about anything.

10. Madrid Vegan in Pull Up Stone 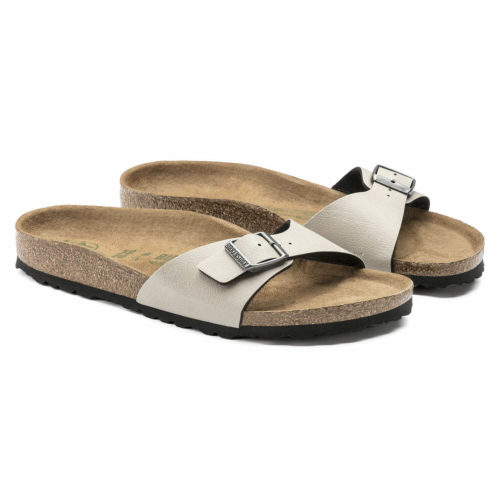 The Madrid Vegan is simple, chic, and comfortable

Simple, comfortable, and versatile, the Madrid Vegan in Pull Up Stone will get your feet through hot summer days in cruelty-free style.

11. Arizona Vegan in Pull Up Bordeaux 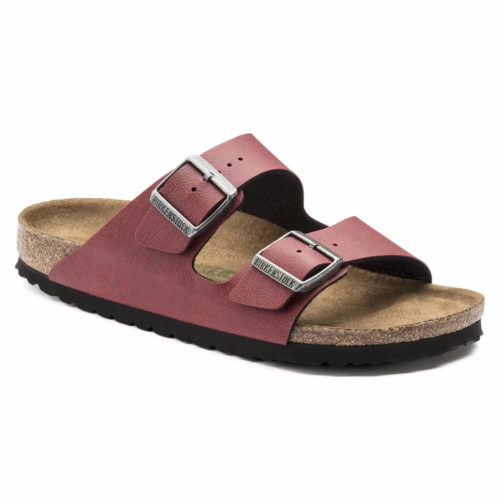 The Arizona Vegan is a timeless classic

The ultra-comfortable and stylish Arizona Vegan in Pull Up Bordeaux features two faux leather straps and buckled embossed with the Birkenstock logo.