The plant-based B12-packed Moving Mountains Burger, which “bleeds” like meat, just launched in the Middle East, according to a press release. The first location to serve the patty is Applebee’s in Dubai.

Rastelli Foods – which supplies hotels, restaurants, and institutions with high-quality food – just announced a collaboration with Moving Mountains Foods, the makers of the vegan burger.

The partnership, worth $12 million, will run for three years and help bring the Moving Mountains Burger to restaurants across the Middle East.

Last week, it appeared at Gulfood in Dubai, UAE, the world’s largest annual food and beverages trade show, and the burger is now officially being served at Dubai’s Applebee’s Neighbourhood Grill + Bar.

The meat-free burger is “set to be the most impactful food invention of the century,” the press release said. A team of scientists, chefs, and farmers worked for more than three years in a lab and created more than 500 recipes to perfect the finished product.

The vegan burger, which is made with pea, wheat, and soy yet closely resembles beef, contains no GMO ingredients, no hormones, no antibiotics, and no cholesterol but is packed with B12 and more than 14 grams of protein. 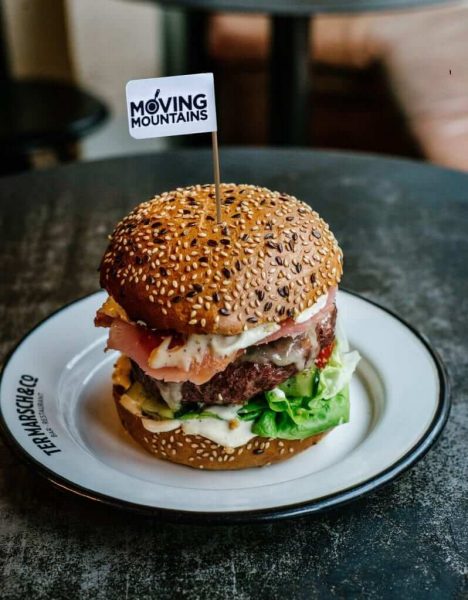 Moving Mountains founder Simeon Van der Molen said in a statement, “We’re so pleased to be expanding outside of Great Britain and launching the U.K.’s first-ever plant-based meat burger into the Middle East. This marks a huge leap in innovation for humanity and will allow consumers to bite into a future of food technology that is better for their health and the health of our planet.”

Speaking to NME.com, Van der Molen said, “The environmental impact of the animal agriculture industry is becoming catastrophic and so it is essential that technological innovation keeps up to provide a real solution for food that is sustainable but doesn’t compromise on taste, therefore providing a viable alternative for vegans, vegetarians and meat-eaters alike.”

According to a spokesperson from Rastelli Foods, the Middle East is seeing “growing demand for meat substitutes.”

“It’s the best alternative to meat that I have ever tried. I’m confident that consumers in the region will love it,” the spokesperson added.