Abhishek Thevar, aka the Vegan Beast, is a vegan bodybuilder, personal trainer, and dance instructor based out of Bangalore, India. He has made it his mission to help others realize that they don’t need meat to build muscle.

A vegetarian since childhood and a long-time calisthenics enthusiast, Thevar cut dairy out of his diet in 2014, when he began following Frank Medrano, a vegan calisthenics expert. After seeing Medrano, Thevar looked into veganism and came across a video from international animal rights organization PETA (People for the Ethical Treatment of Animals).

“When I watched the reality behind the cruel dairy industry, I immediately went vegan overnight,” Thevar told LIVEKINDLY in an email. At the time, he had just started going to the gym. “So, my entire fitness and bodybuilding transformation and career have been vegan,” he added. 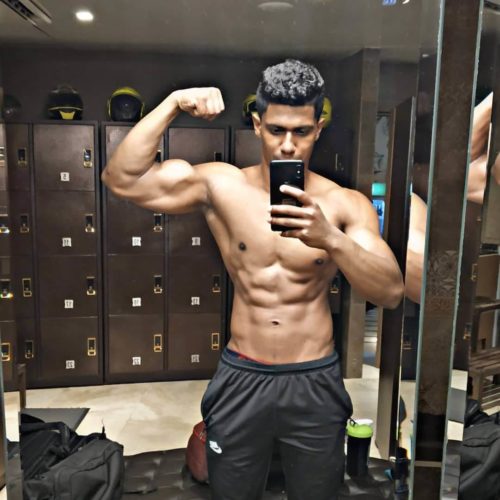 Thevar finds it easy to get enough protein. | Abhishek Thevar

When it comes to getting enough protein, Thevar said it’s never been an issue. “In fact, I build muscle faster,” he said. “When I started gymming I was 55kgs in 2014 and in just one year I was weighing 73kgs and competed in state-level bodybuilding competition.”

He nows weighs 80kgs, has competed in a few national championships and is preparing for his international debut. Thevar said that many chalk his physique up to genetics, but he also believes it’s due to his dedication to his routine. “No one sees how much work I have put in and the discipline. Most people lack discipline and consistency and unless you make fitness a lifestyle you are not going to see results,” he said.

His plant-based diet also seems to help him recover faster. Last June, a traffic accident with a broken tibia and fibula and damaged nerves. Doctors and colleagues recommended that he eat chicken, lamb, and eggs in order to help him recover. Instead, Thevar followed a whole food, plant-based diet. In just three months, “I’m lifting 100kg squats, 100kg deadlift, and 100kg benchpress with broken bones and nerves.”

By the nature of the business, the body of professional athletes experiences a lot of wear-and-tear. Many athletes who have adopted a plant-based diet also report faster recovery times. 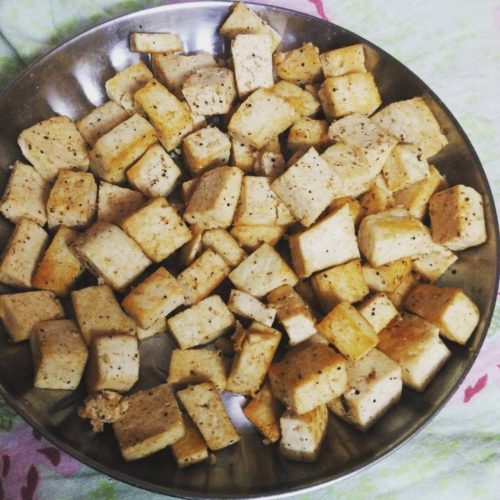 Tofu is a good source of plant-based protein. | Abhishek Thevar

What A Vegan Bodybuilder Eats

As a vegan fitness trainer and bodybuilder, Thevar eats the same way 365 days a year, whether or not he’s preparing for a competition. “I lead by example, so my clients are always motivated,” he said.

So, what does he eat? “As a personal trainer, my day starts very early at 5 am, so I eat around seven to eight meals a day, starting with a smoothie.”

The macronutrients — carbs, protein, and fats — and micronutrients — vitamins and minerals the body needs in smaller amounts — in his meals are balanced. He keeps his meals small and eats every two or three hours. “Every day, I eat fruits and veggies. Plenty of beans, nuts, and seeds. Two protein shakes a day,” he said. Not a single thing is missed on any given day. 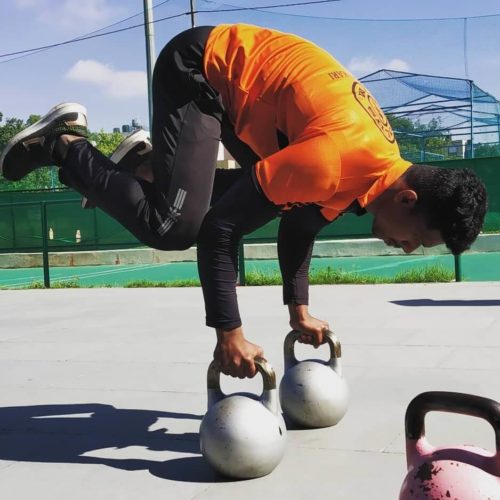 Protein — specifically, meat — is tied up with masculinity and athleticism. It’s the subject of James Cameron’s new documentary “The Game Changers,” which features top athletes who eschew animal products. In the film executive producer, longtime Cameron collaborator, and former bodybuilder Arnold Schwarzenegger spoke on how advertisers trick people into thinking they need meat to build muscle. Thevar agrees — it’s all a myth.

“It’s a myth that people who are into sports need a lot of protein. It’s just a marketing gimmick that has been followed,” he said.

As a bodybuilder and fitness trainer, he carefully monitors his protein intake and “never has a problem” meeting his needs. “An athlete needs only 1.2-1.8gms of protein per kg of the body weight, which can be covered in a vegan diet.”

According to Thevar, the hyperfocus on protein also comes from a lack of knowledge.

“Bodybuilders are compassionate like other human beings, but it’s just because of this sports myth they eat meat and believe that bodybuilding cannot be done without meat or eggs,” he said. Many of his bodybuilder friends have considered vegetarianism or veganism, but he sees a need for more fitness experts who can speak to the benefits of a plant-based diet.

Also, don’t just focus on protein, he said. “Make sure you follow a proper, balanced diet covering all the micronutrients as well, which is very important.”

Take Care of Yourself

It’s not enough to just focus on results — it’s also important to check in on your health.

“Do your blood checkups every 3-6 months and make sure you are not deficient of d3, b12, iron, etc,” he added. Failing to take care of one’s health is the biggest mistake any athlete — beginner or professional –can make. “That’s why many of them don’t build muscle or achieve results. It’s a proper, balanced diet that helps you achieve that dream physique,” Thevar said.