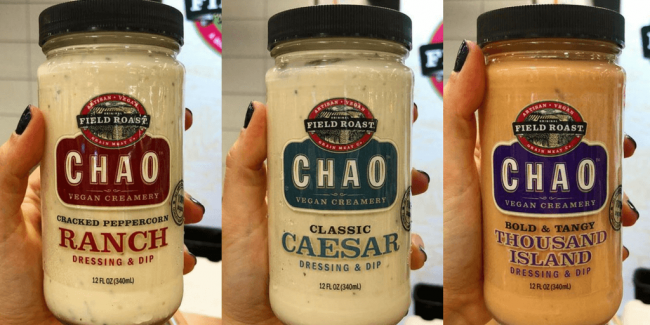 “[T]oday our ever-expanding line of Chao Creamery products give homage to the flavorful plant kingdom and celebrate umami at its finest, using Chao as an important ingredient,” states Field Roast about its Chao creamery, that launched in 2003.

“Instead of making fake dairy products that mimic the traditional flavors found there, we have innovated new flavors to delight and inspire you, and extend that to creamy spreads, sauces, and dressings.”

The vegan mayo market is thriving. Leading the market is JUST, formerly Hampton Creek, and Follow Your Heart, with products JUST mayo and Veganaise, respectively. Innovative company Rubies in The Rubble launched a vegan mayo product alongside the egg-free condiments earlier this year, with a competitive edge as it aims to reduce food waste.

A report published last year concluded the vegan mayonnaise market is expected to “Grow Exponentially” in coming years, due to a “growing health consciousness among the consumers.”

Recent data revealed half of America’s diet-related greenhouse gas emissions would be eliminated if just 20 percent of Americans went vegan. If the country is to be a part of a global collective and spearhead the way to a cleaner future, a shift toward a predominantly plant-based diet is proving necessary.