Our oceans are under threat. Overfishing and plastic pollution are causing detrimental damage to our underwater ecosystems and the marine species that rely on them to survive. But what can we do as individuals to try and help our oceans recover? One option is to stop eating seafood. With the abundance of vegan seafood brands now on the market, it’s easier than ever to enjoy vegan fish and protect the oceans. 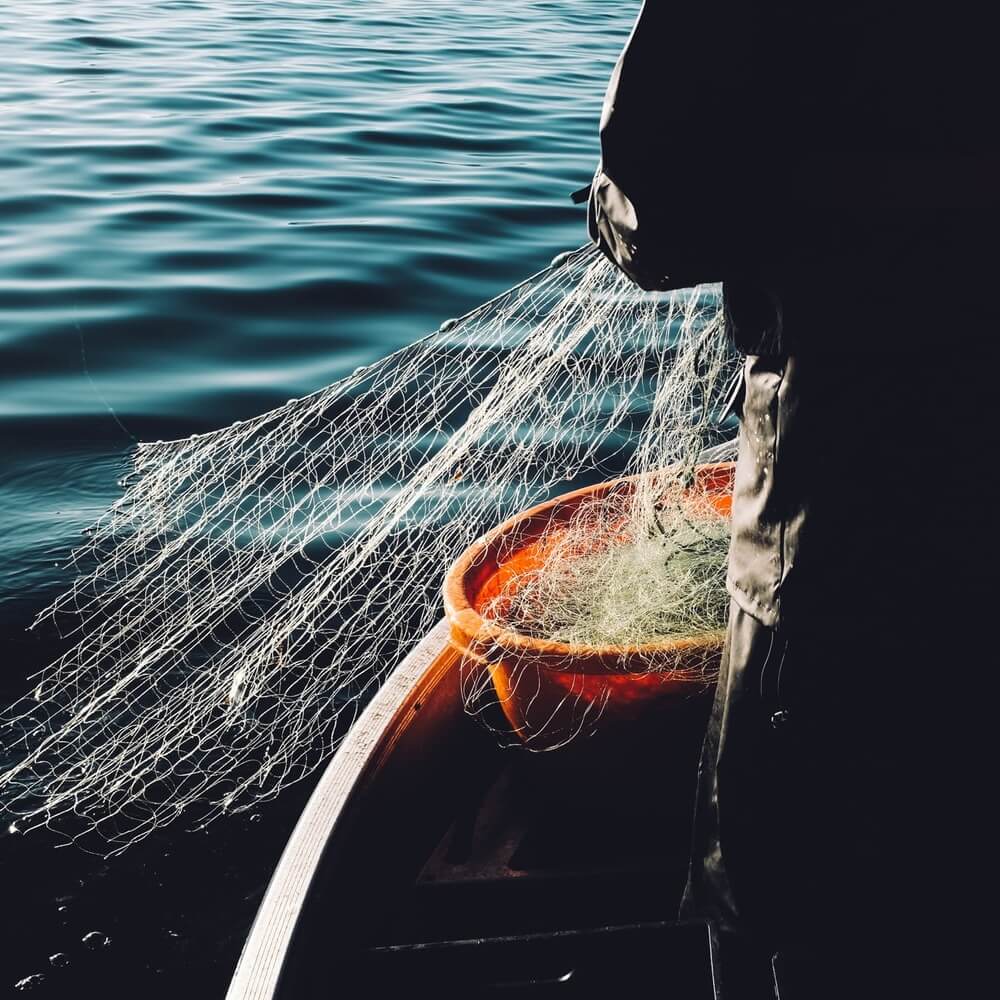 Fishing gear makes up nearly half of plastic pollution.

Much of the ocean pollution comes from the fishing industry. Although single-use plastic items like straws, stirrers, and bottles are undeniably a significant source of pollution in our seas, nearly half of all marine plastic waste is made up of abandoned fishing gear.

A survey conducted by the Ocean Cleanup Campaign in 2018 revealed that 46 percent of plastic comes from fishing nets. According to Bloomberg, these nets continue fishing long after they’ve been abandoned. Marine animals — like whales, dolphins, and turtles — become entangled in the nets, which often results in severe injury or suffocation.

The Threat of Overfishing 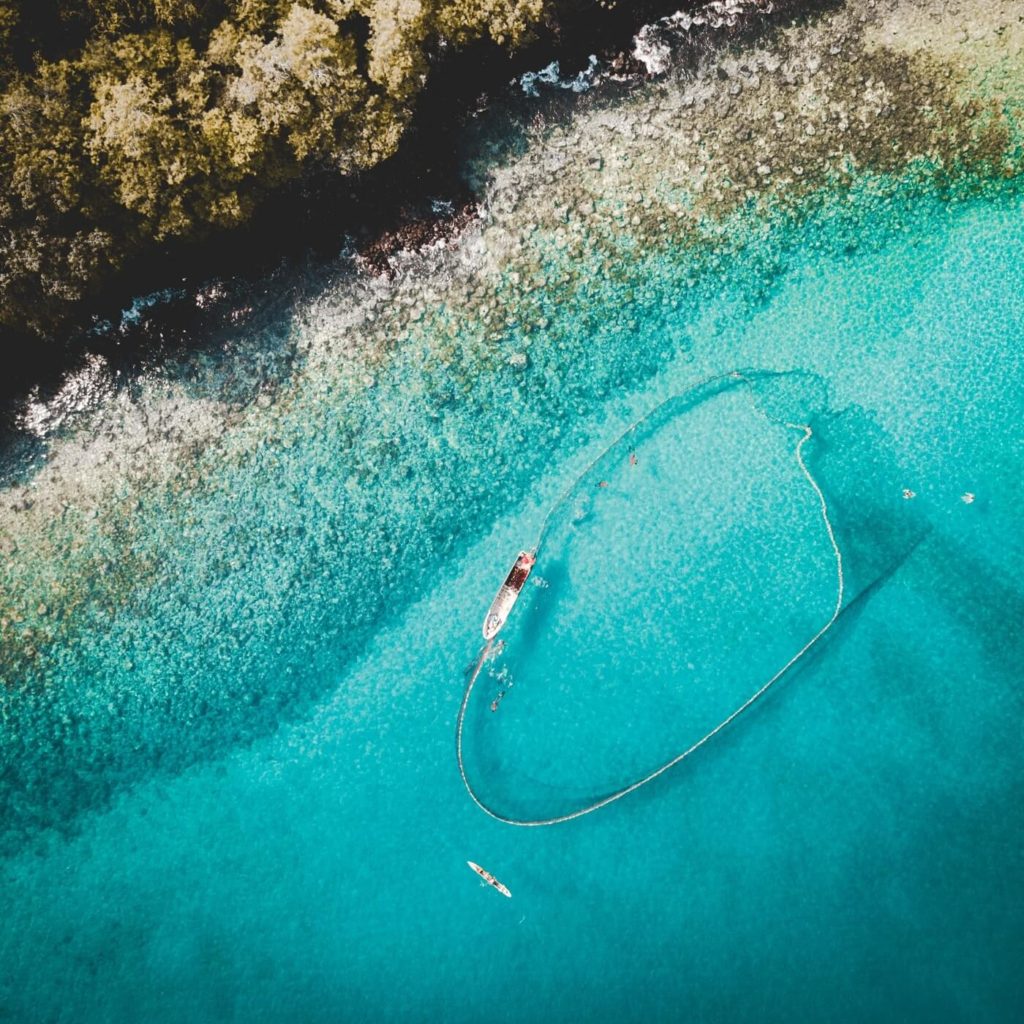 Marine conservationists are also up against overfishing. According to the World Wildlife Fund (WWF), “fishing is one of the most significant drivers of declines in ocean wildlife populations.” Around the world, the number of overfished stocks has tripled in the last 50 years.

Overfishing doesn’t just impact the fish it’s trying to catch, but also countless other marine creatures. “Overfishing is closely tied to bycatch — the capture of unwanted sea life while fishing for a different species,” adds WWF. “This, too, is a serious marine threat that causes the needless loss of billions of fish, along with hundreds of thousands of sea turtles and cetaceans.” 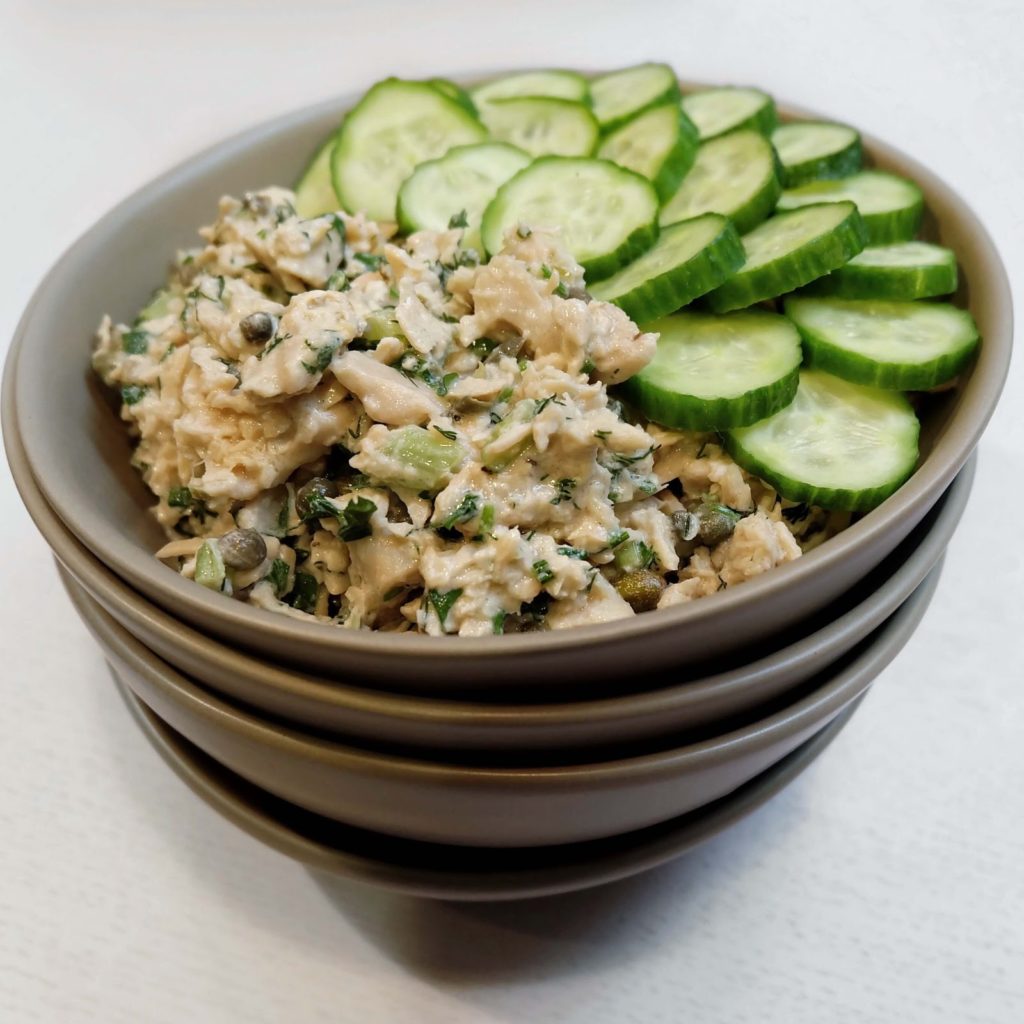 If you understand the issues surrounding eating seafood, but you just can’t shake that craving for Friday night fish and chips, a handful of fish and chip shops in the UK now offer plant-based versions of the traditional dish.

In Leicester, The Fish & The Chip has decided — after an “eye-opening” fishing trip — to stop selling seafood and go vegan. The shop wrote in a statement after the trip, “we saw the impact pollution is having on the oceans and fish stocks and we are not comfortable running a restaurant that has such an impact on our environment.”

But if you’re not in Leicester or London, most fish and chip shops — in the UK and elsewhere — are still offering the same standard cod and haddock; both of which are unsustainable choices, according to the Marine Conservation Society. Luckily, more and more brands are offering cook-at-home vegan fish products.

These 7 Vegan Brands Will Help You Ditch Fish For Good 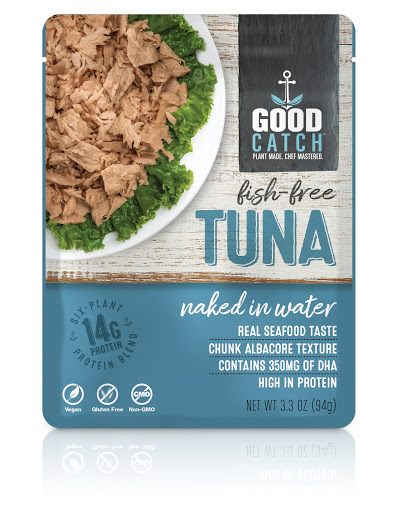 Tuna is a staple food in many households; you can whack it in a sandwich, a salad, on top of a jacket potato, or just eat it on its own with a little mayonnaise and sweetcorn. For years, the flaky canned fish has been a comfort food to many. So, what happens when you find out that the world’s insatiable appetite for tuna has sent the population of the fish into decline? Or when you realize that eating too much could lead to mercury poisoning? You ditch the tin, and you pick up a pouch of Good Catch Foods’ fish-free tuna.

Co-founded by brothers Derek and Chad Sarno — the creators of the blog “Wicked Healthy” and the authors of “The Wicked Healthy Cookbook” — Good Catch Foods is a chef-driven vegan seafood brand. It’s inspired by a love of the sea and all of its creatures, as well as a passion for creative cooking and food development.

Made with a six-legume blend of peas, chickpeas, lentils, soy, fava beans, and navy beans, each fish-free product is packed with plant protein. Initially chosen due to the popularity of each of the ingredients, the specific blend also gives the products their flaky fishy texture. Added algae oil provides vital omega-3s. According to Good Catch Foods, omegas are  crucial to our well-being, bolstering our nervous systems, eyes, brain, and heart health. Humans can’t make omega-3s and must source from diet. Good Catch Foods’ fish-free tuna is among the limited food sources that supply them.

Good Catch’s tuna — available in Naked, Meditteranean, and Oil & Herbs flavors — is available in the US nationwide in various retailers such as Whole Foods, Wegmans, and Fairway. You can also find their products online on Thrive Market. And customers are already loving it. One Thrive Market shopper commented on its website, “so yummy! If you miss tuna, you [have to] try this!” 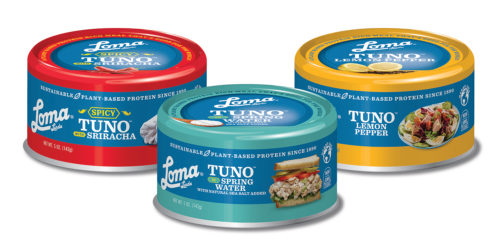 Tuno comes in an easy-to-open can.

Almost every aspect of the TUNO experience is the same as using ocean-sourced tuna — apart from the impact on the ocean. It has a similar taste and texture, it’s protein-rich, gluten-free, and, just like its fishy counterpart, TUNO is a good source of omega-3s.  Plus, it also costs slightly less per can ($1.49-1.99) than many other fish-based tunas.

“Overfishing is a global problem that’s getting worse by the day,” said Atlantic Natural Foods chairman and founder  J. Douglas Hines in a statement. “With the Atlantic and Indian oceans under siege, and the Pacific under review … TUNO is addressing the long-term need for alternate protein sources.”

He continued, “the unsustainability of tuna is only part of the issue — other oceanic pollutants like microplastics are also a real concern; TUNO gives people a delicious, shelf-stable and earth-conscious solution.”

Made with soy protein and seaweed, TUNO comes in several different flavors, including Spring Water, Spicy Sriracha, and Lemon Pepper. The latter, as well as Sesame Ginger and Thai Sweet Chili flavors, are also available in a convenient 3 oz. pouch form.

The fishless tuna is available on Amazon and in 8,500 retailers across the world, including Walmart in the U.S, Morrisons in the UK, and stores in Australia. 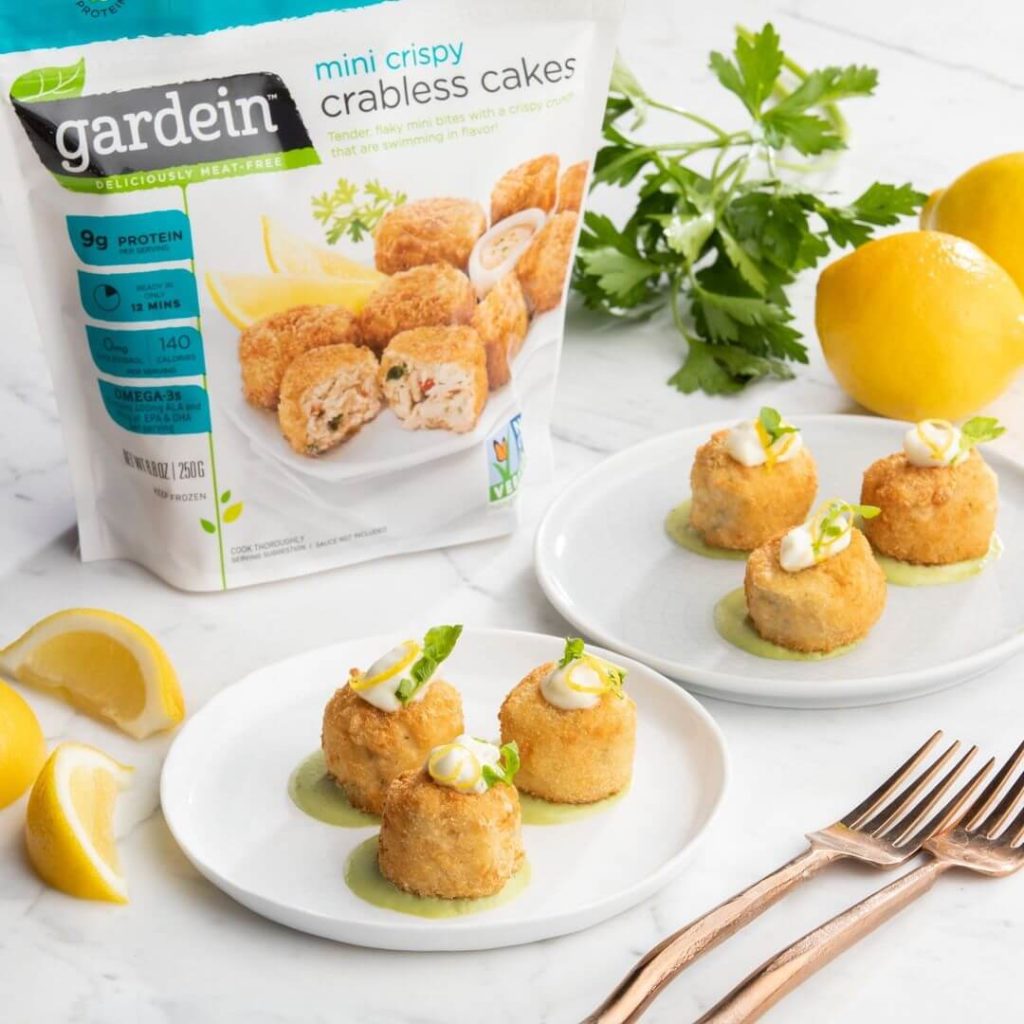 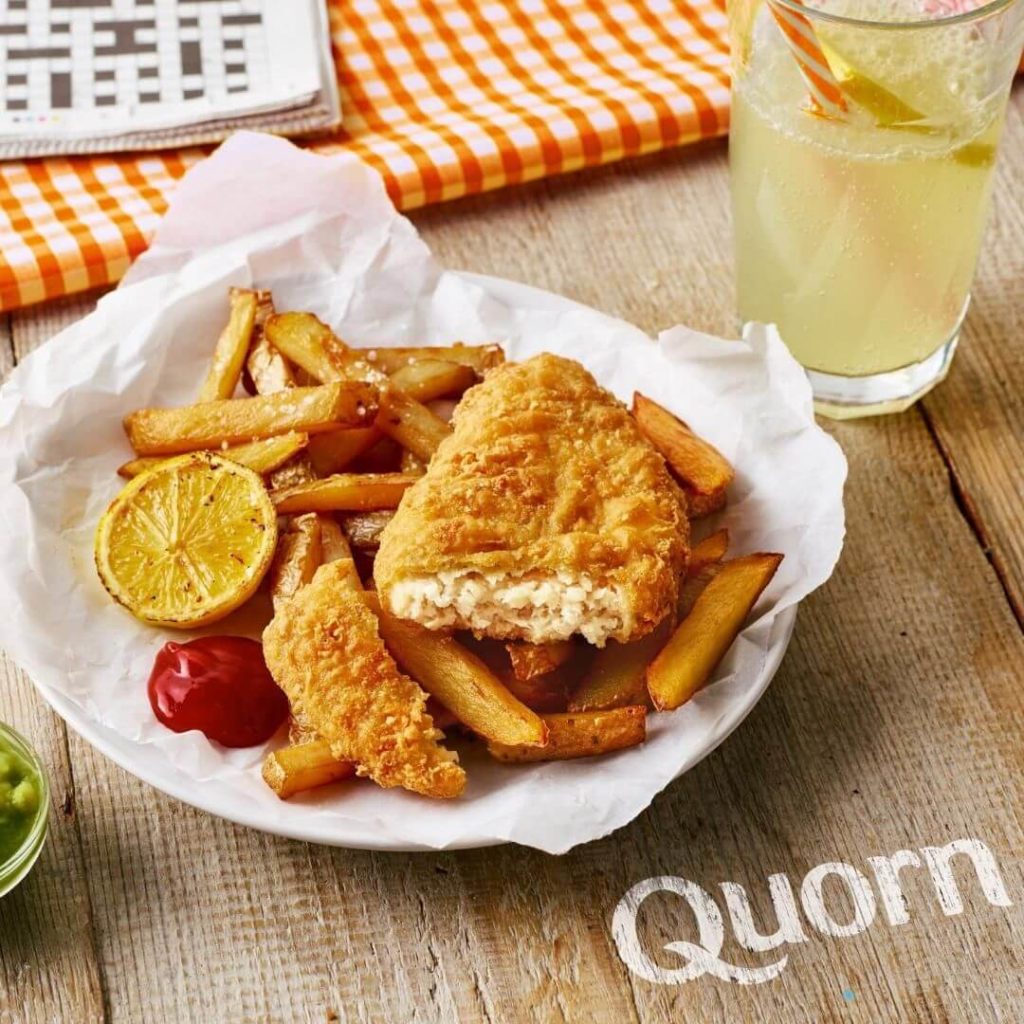 Alex Glen, Quorn’s marketing director, said in a statement earlier this year, “for the first time ever, more than half of all UK consumers are reducing their meat consumption and 57% of people believe that reducing meat benefits the environment. There’s never been a better opportunity for convenience retailers to embrace meat-free products and promote their benefits.” 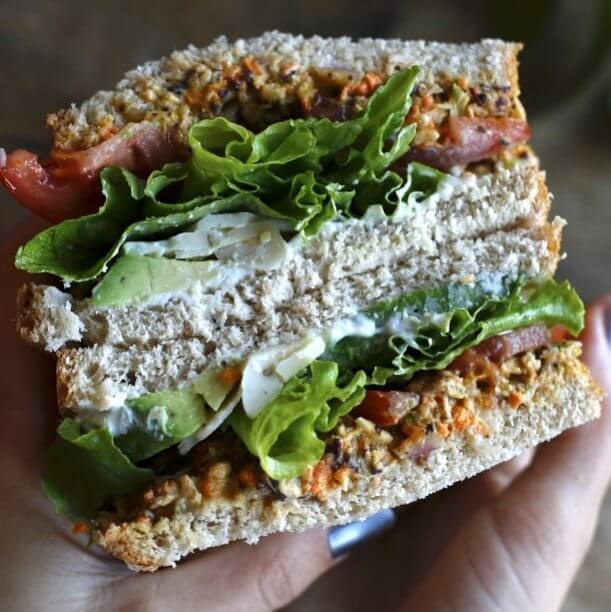 As the name suggests, Tofuna Fysh makes vegan tuna products. Unlike many of its competitors, the brand uses jackfruit to make its flaky fish-free offering, which is then flavored with seaweed. Tofuna Fysh comes in three different salad-based varieties: Classic Veggie Salad, Chickpea & Dill, and Spicy Ceviche. As well as vegan tuna, the brand offers Fysh Sauce for stir-fries, sushi, soups, and salads. Like Tofuna, the sauce gets it fishy flavor from seaweed extract. 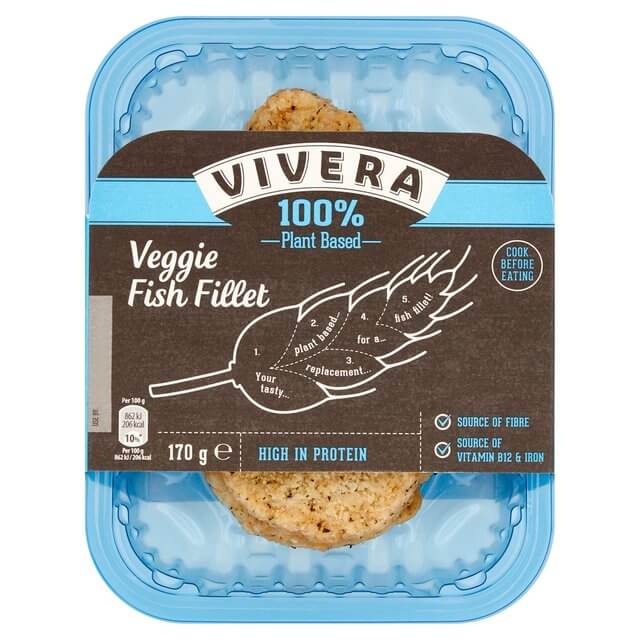 Vivera fish is high in vitamin B12.

Dutch veggie brand Vivera offers everything from vegan schnitzel to kebab meat. It has most bases covered when it comes to vegan meat products, including a selection of fish-free foods. Made with wheat protein, the brand’s Veggie Fish Fillets and Veggie Goujons are high in iron, fiber, and vitamin B12. 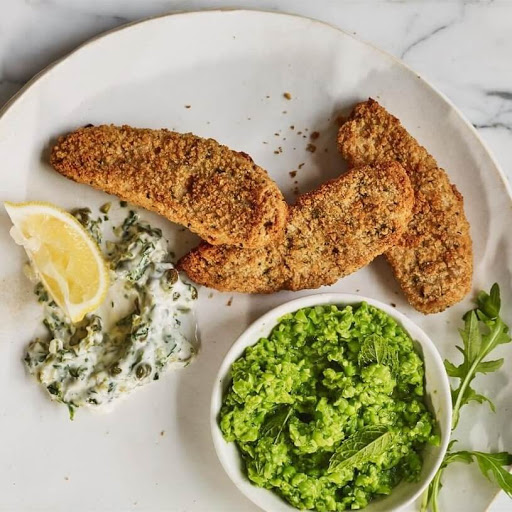 Linda McCartney is a popular UK veggie brand, which was founded by Paul McCartney’s late wife back in the early 1990s. The brand is still going strong, offering vegan sausages, burgers, and even country pies. It also offers vegan fish products, including Vegetarian Scampi Bites and Vegetarian Fish Goujons.

“Linda McCartney embraced kindness and compassion in everything she did and this continues to run through what we do today,” the brand says on its website. “We take our social responsibility seriously and we’re on a mission to be good to the planet in every way we can.”