British summertime can encompass all different types of weather, from rain, to serious wind, to those much sought after brilliantly warm days filled with sunshine. But you can turn any of them into a perfectly delicious vegan picnic — whether indoors or out.

When the sun does decide to bless us Brits with a little appearance, many decide to rally the troops –aka closest friends and/or family — pack up the picnic basket, and head off down to the park or the beach to soak it all up (before we’re all being lashed by rain and wind again, most likely the very next day).

If you’re packing up a vegan picnic — or simply attempting to rely less on meaty foods this year — these are the 11 plant-based eats you won’t want to miss out of the hamper. 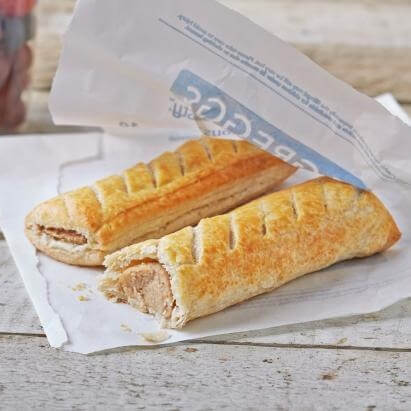 The fact is, you can’t go wrong with a sausage roll, it’s a crowd-pleaser. No need to faff about with different sandwich fillings, just head down to Greggs and pick yourself up some of their now-iconic £1 Quorn-filled vegan sausage rolls.

If they’re sold out, don’t panic. Since Greggs’ successful launch of the meatless pastry earlier this year, a number of supermarkets and bakeries have created copycat versions. You can pick up vegan sausage rolls from Waitrose, Sainsbury’s, Aldi, and Tesco, or if you’re in Ireland, you could even grab one from an Appletree’s gas station.

If none of these are up to scratch, why not make your own? Try this recipe from Crunchy Carrot or this one from Exceedingly Vegan. Lauren Toyota’s Hot For Food Vegan Comfort Classics also includes a vegan sausage roll recipe, as well as 100 other comfort food recipes. 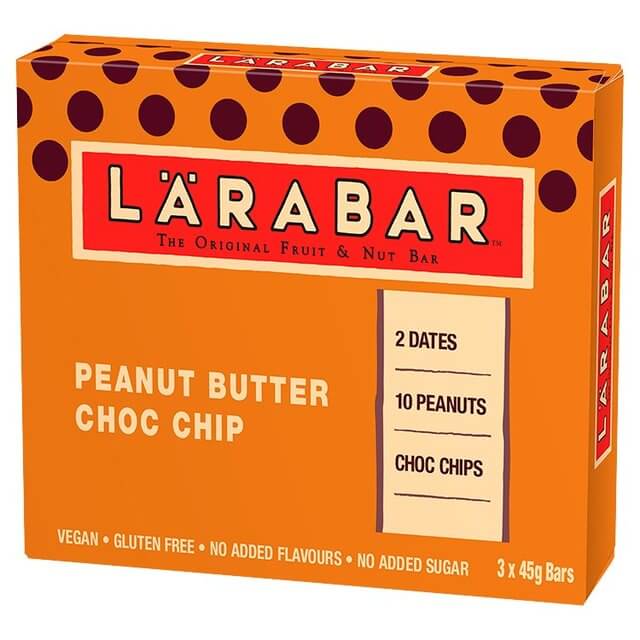 Larabar snack bars are made with minimally processed ingredients

Vegan snack bars are a great little addition to a picnic, they feel like a treat, but they’re often still super healthy, so everybody wins. Eat Nakd offers a wide variety of flavors, including Cocoa Delight, Cashew Cookie, Ginger Bread, and Pecan Pie. Larabar is another option, the all-organic, minimally-processed flavors include Blueberry Muffin, Peanut Butter, and Cashew Cookie. According to the brand, these bars are “a magical combination of whole foods such as nuts and apples that will lift your spirit with every bite.”

If you’re feeling confident in the kitchen, you could make your own vegan snack bars to take with you. Try these No-Bake Granola Bars by From My Bowl, or maybe these Almond Coconut Granola Bars by Cookie and Kate. 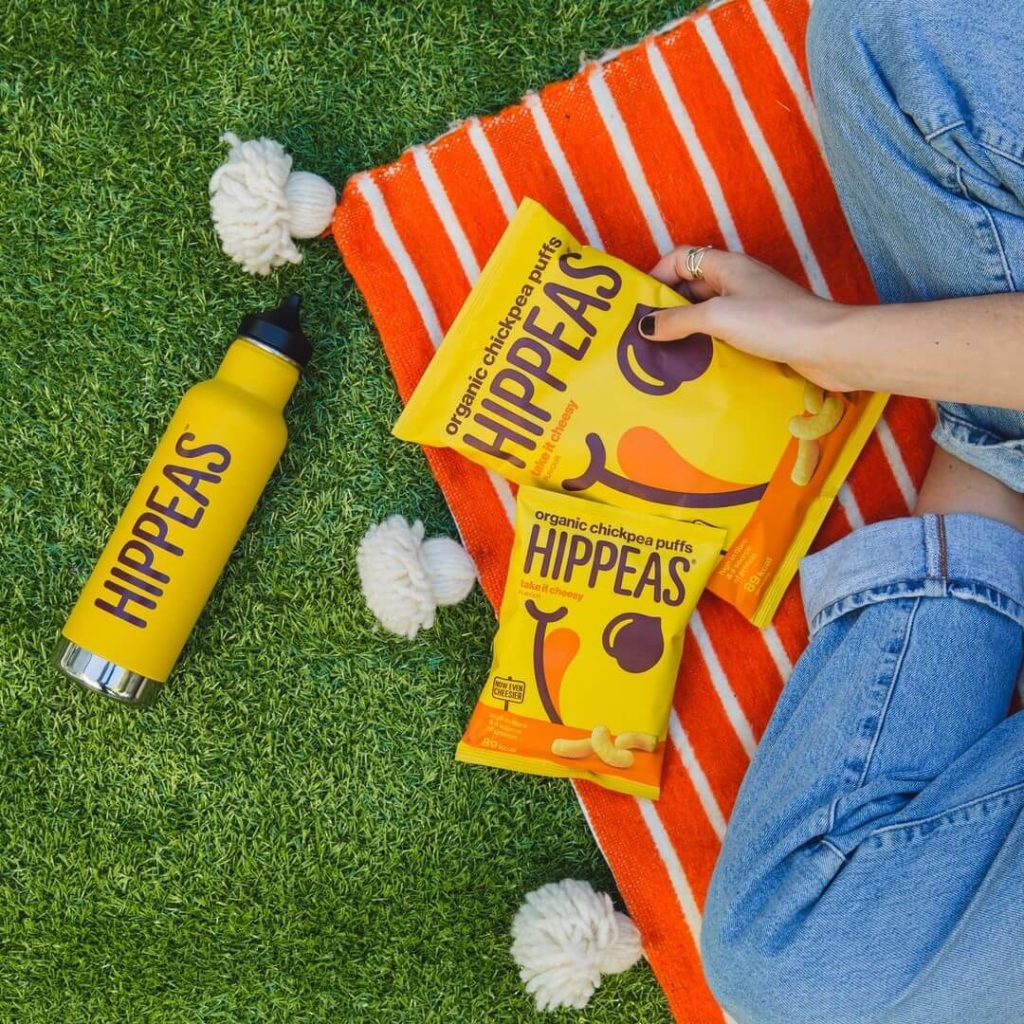 It’s not a picnic unless there are crisps involved, that’s a universal rule. There are so many options of vegan crisps on the market, it’s difficult to keep up, from ready salted Hula Hoops (or pretty much, ready salted anything) to BBQ Pringles and Chilli Heatwave Doritos.

But if you’re looking for something a little more unique, and perhaps a little less processed, why not try Hippeas? The Leonardo DiCaprio-backed brand makes vegan cheese puffs in a variety of flavors, including White Cheddar, Sweet & Smokin’, and Salt & Vinegar Vibes. Each flavor is high in fiber, gluten-free, organic, and a source of protein.

If you fancy taking it to the next level, consider making your own and bagging them up and taking them with you. Try this recipe for Oil-Free Baked Veggie Chips by The Big Man’s World, or maybe this recipe for Vegetable Crisps by So Vegan. 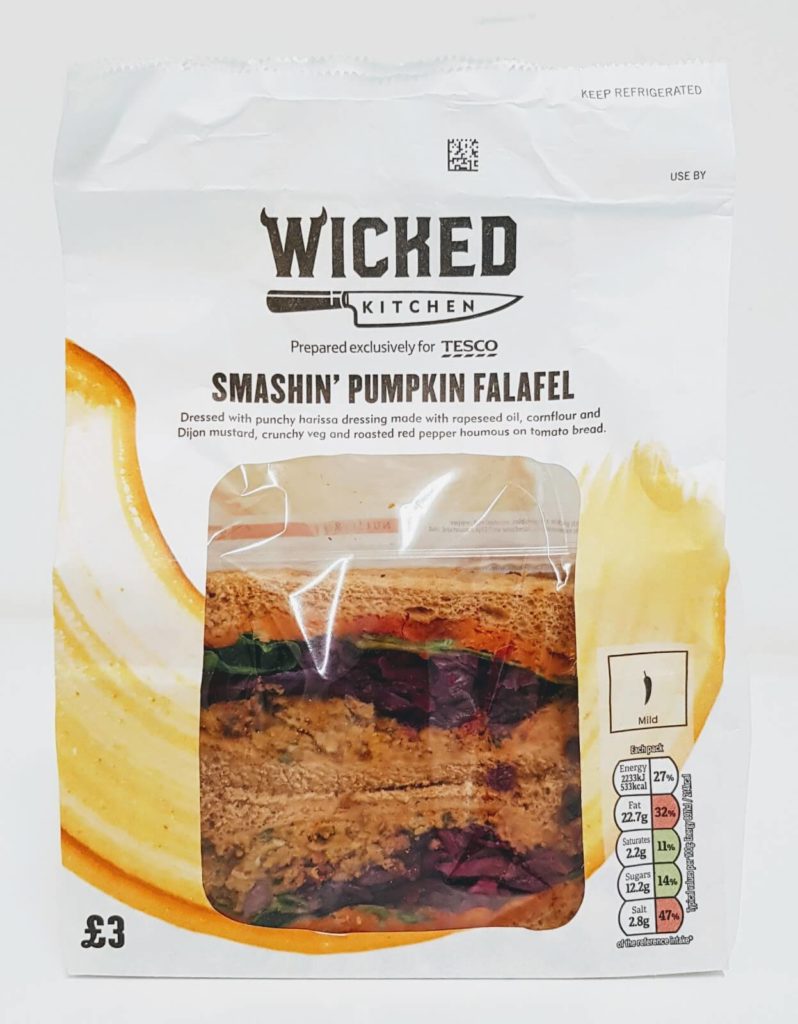 If you don’t feel like making your own sandwich, Tesco’s Wicked Kitchen range has vegan options

Aside from the normal (Quorn or Tofurky) ham or (Violife) cheese, there are a number of different sandwich fillings you can experiment with to jazz up your picnic. Why not try chickpea “tuna” or a vegan BLT with tempeh?

If you’re — quite understandably — just not in the sandwich-making mood, many supermarkets now have a variety of vegan sandwich options. Try the All Day Vegan Breakfast sandwich from Boots, or Waitrose’ own twist on the BLT: the Vegan MLT. Tesco has a wide range of options in its Wicked Kitchen range, from vegan chicken caesar wraps to the Smashin’ Pumpkin Falafel sandwich. 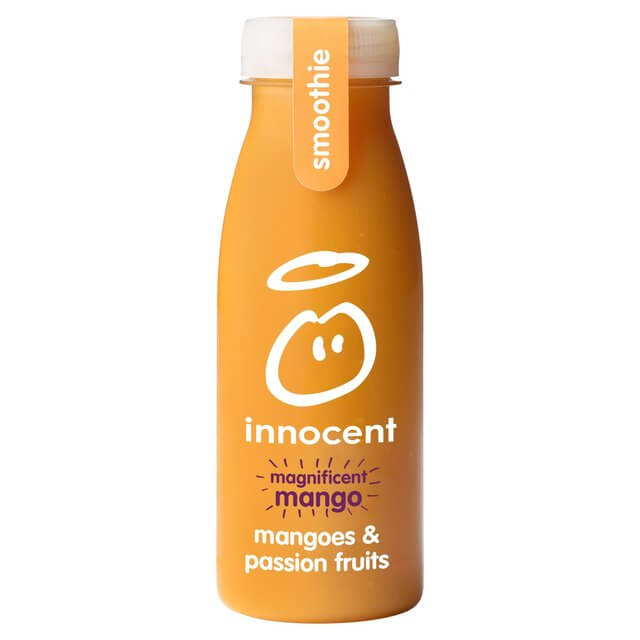 Everyone knows that fruit makes the perfect addition at a picnic; load up your hamper with strawberries, raspberries, and blueberries and you can’t go far wrong. But another creative way to keep your picnic party happy and healthy is with some fruity smoothies. Many supermarkets have their own versions, or Innocent offers a variety of flavors. If you fancy making your own, the brand even offers its own vegan smoothie recipe book. 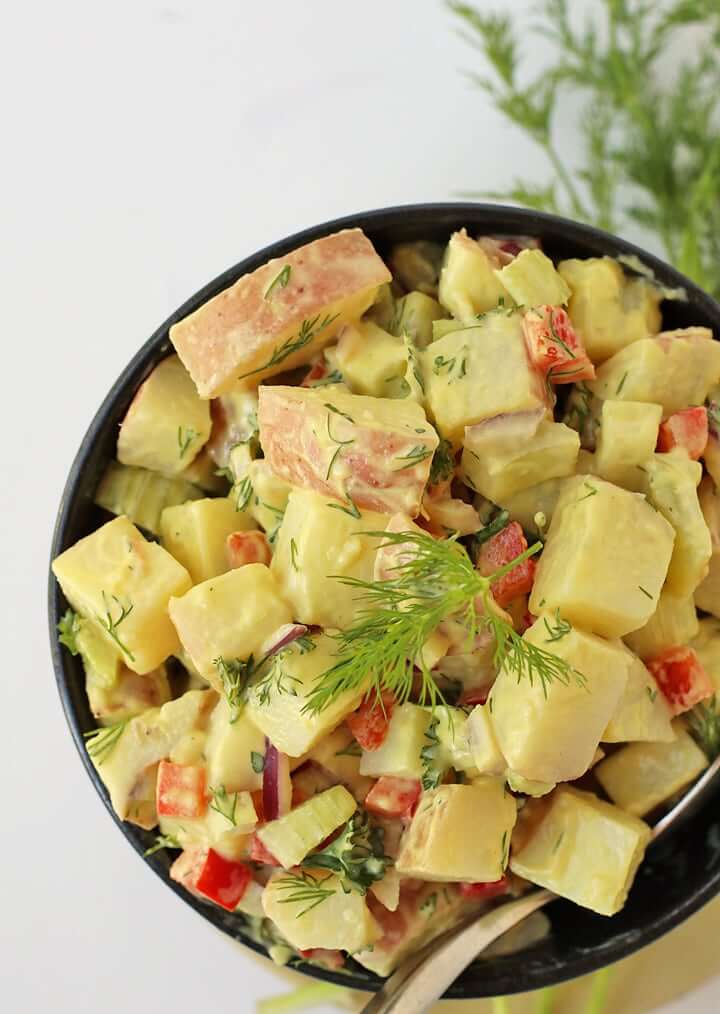 After crisps, potato salad is the next most important food at a picnic. It may not be easily located in the supermarket, but have no fear — the good old internet is loaded with plenty of recipes to choose from. For a simple, quick, and easy recipe, try this one from Minimalist Baker. Or if you want an ultra creamy mix, try this recipe by My Darling Vegan. The latter recommends Just Mayo for a “super delicious” creamy outcome. 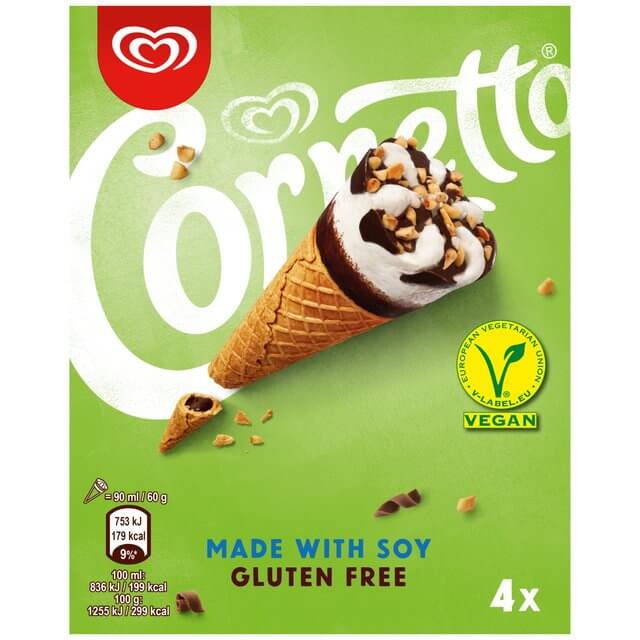 Load up your picnic cooler with vegan Cornettos

You either need to buy these during the picnic or load up a cooler with some dry ice if you’re going to make or buy some beforehand, but ice cream on a picnic can (and should) be done. Nowadays, supermarkets are lined with ice cream and ice lolly options, from Magnums, to Cornettos, to choc ices, and Soleros.

If you prefer to make your own, Minimalist Baker’s recipe for vanilla coconut ice cream is really easy to make, and only requires five ingredients.  If you and your family are chocoholics, give this coconut chocolate chip recipe by Beaming Baker a shot. If you want some more creative flavors, the N’ice Cream recipe book is packed with ideas. 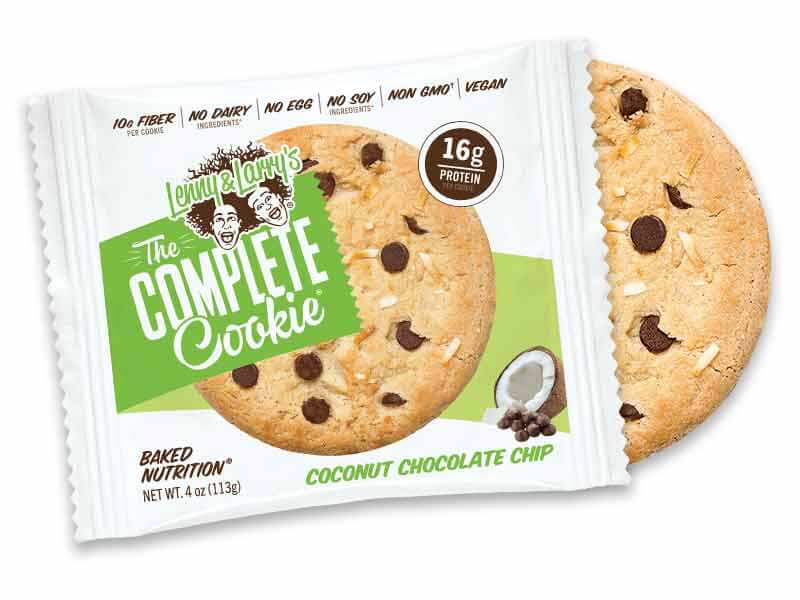 Cookies and cakes are guaranteed to keep all of your picnickers happy. If you’ve got the time beforehand, you could whip up these Amazing Chocolate Chip Cookies by Cookie and Kate, or these vegan Sugar Cookies by Minimalist Baker. For something really indulgent, try this Chocolate Caramel Popcorn Cake recipe by Wallflower Kitchen.

If you’d rather order in the vegan treats, try Lenny & Larry’s Chocolate Chip cookies, or gluten-free cookies from Alyssa’s Bakery. For cupcakes, try these almond butter ones by Noosh. 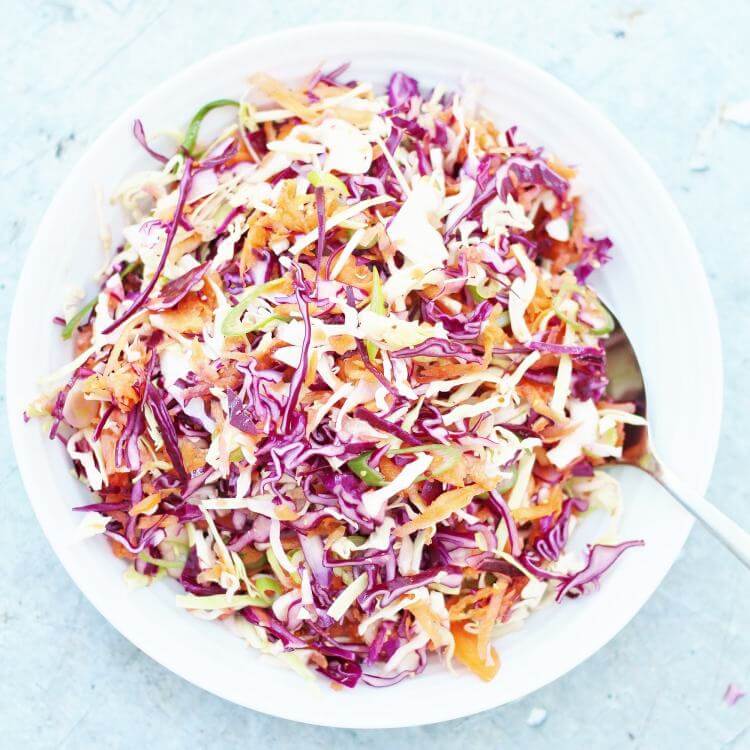 Coleslaw can be easily made vegan, just opt for vegan mayonnaise or simply skip the ingredient altogether.

As the name implies, this Easy No Mayo Coleslaw by Easy Peasy Foodie is super simple to throw together, just mix some white and red cabbage with some carrots and spring onions. To make the mayo-free dressing, mix some apple cider vinegar with Dijon mustard, salt, pepper, and olive oil.

If you’re not down for coleslaw with no mayo, why not try this recipe from Yummy Mummy Kitchen? Recipe creator Marina Delio says, “this easy vegan coleslaw recipe tastes just like the classic! Creamy vegan coleslaw dressing gets whisked together and drizzled over shredded cabbage and carrots for the perfect side dish.” 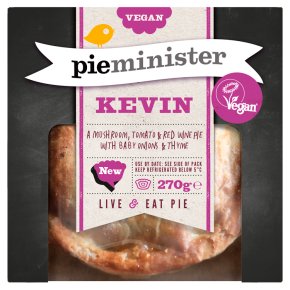 A vegan pie is the ideal addition to any picnic. Cook up Pieminister’s vegan pie — named “Kevin” — before you go for a real crowd pleaser. It’s packed with British chestnut mushrooms, tomato, and baby onions, and according to Waitrose, it “has all the taste, texture, and depth of flavour enjoyed in a well-made traditional British pie.”

If you’re a Linda McCartney fan — who isn’t? The brand offers Vegetarian Country Pies packed with textured soy protein in a rich onion and beef-style gravy. Cook up before you go, cool, and enjoy cold.

If you fancy making your own, try this Easy Vegan Mushroom Pie recipe by A Virtual Vegan, or maybe this Vegan Chickpea Pot Pie recipe by From My Bowl. 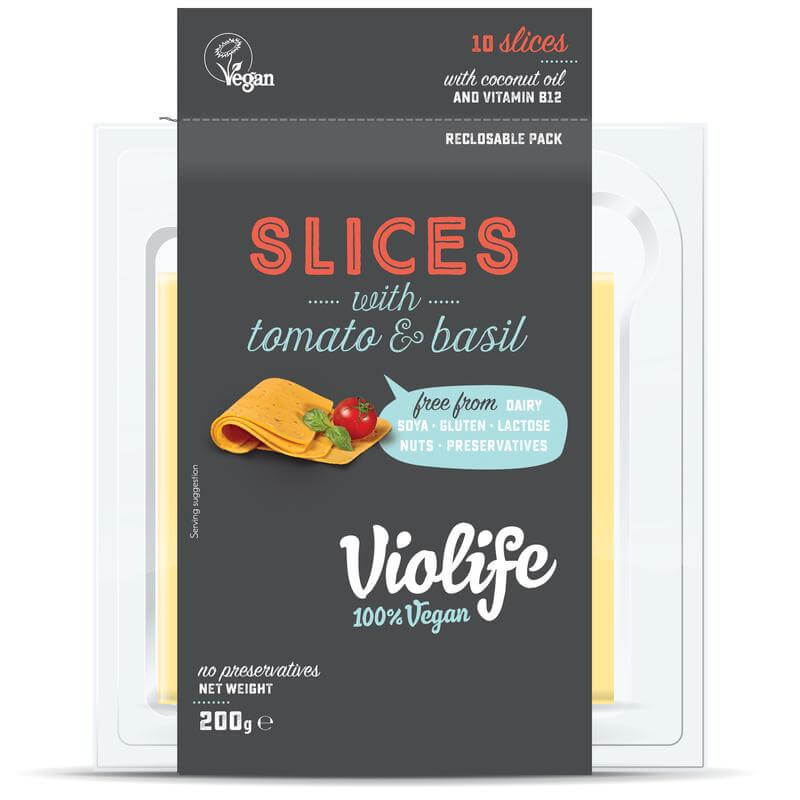 Who says you need to eat dairy to break out the cheese and crackers at a picnic? These days, there are so many different vegan cheeses to choose from, it will actually take you a little while to decide on the best one.

Greek brand Violife offers Cheddar, Tomato & Basil, and Greek White feta-style vegan cheese, among many other options. Daiya also offers vegan cheddar-style cheese, as does Bute Island Foods, and many supermarkets carry their own versions. So pack up your crackers, box up whatever dairy-free cheese takes your fancy, and enjoy with a little vegan wine in the sunshine.