You can get a vegan burger made with real gold in Las Vegas.

Vegas-focused vegan blog Vegans, Baby reports that Slater’s 50/50 — a meat-heavy restaurant famous for its half beef, half bacon burger — has updated its menu with meat-free options. The establishment currently offers two vegan patties (quinoa and Impossible) as well as the limited edition grilled portobello mushroom burger. According to Slater’s 50/50, the latter will be added to the permanent menu if it sells well.

The most attention-grabbing item on the Slater’s 50/50 menu, the 24K Gold Burger, which is served on a ritzy gold leaf brushed bun, is vegan upon request. Writer Michael Monson notes that you need to request vegan bread (the default contains honey), swap the meat patty for Impossible, and leave off the bacon.

“To be sure, this is not a vegan restaurant by any stretch. Their bread and butter is the bacon they add to almost every item. However, you gotta hand it to a restaurant who sees vegans as a valuable customer,” Monson writes. 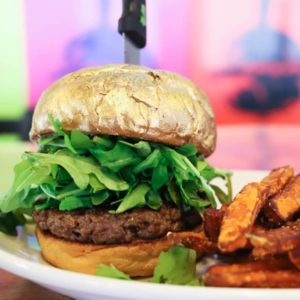 Over the past few years, Sin City has become increasingly vegan-friendly, thanks in part to Vegans, Baby founder Diana Edelman. Edelman consults with local restaurants in hopes of increasing their vegan options by showing what dishes can be made plant-based and by showing how it can impact sales.

Edelman’s efforts paid off — she revealed last August that since her blog launched in 2016, Vegas has seen a 400 percent increase in vegan restaurants. The number is even higher now. Soon, the city will get its first meat-free butcher shop.

Many restaurants add plant-based options to the menu as a result of demand. Major gaming company Station Casinos made several of its restaurants more vegan-friendly in April 2018. Award-winning steakhouse Hank’s Fine Steaks & Martinis launched a vegan menu in June 2018. Good Pie, a pizzeria located in downtown Las Vegas, makes vegan options so good, even meat-eaters come back for more.

Adding vegan options to the menu — or going completely vegan — has proven to be a successful tactic. According to restaurant consulting firm Veganizer, restaurants that it helped go vegan reported a spike in sales. Delice & Sarrasin, an NYC-based French restaurant, experienced a 350 percent increase in sales after it eliminated all animal products in October 2016.