London-based vegan burger company The Vurger Co has teamed up with Tom’s Kitchen, a popular chain of restaurants owned by esteemed chef Tom Aikens, to offer a special vegan menu item this January.

Thanks to The Vurger Co, Tom’s Kitchen will play host to an amazing vegan burger this month. According to Caterlyst the Vurger Burger ‘features a hoisin glazed mushroom patty with crispy Pak Choi, topped with hoisin stir-fried oyster mushrooms and shredded crunchy spring onions, cucumber and red cabbage.’ 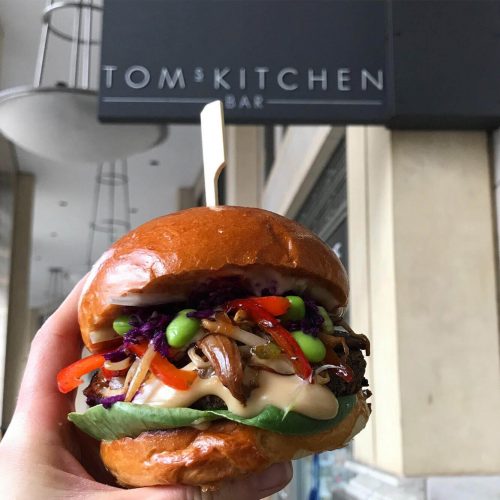 Speaking with LIVEKINDLY, Rachel from The Vurger Co said ‘We wanted to team with Tom’s Kitchen as their menu is predominantly non vegan with a few veggie options. We were put into contact with their director of operations and showcased our menu to show what it was we were all about.’

She continued ‘We couldn’t be more proud or excited to see such a high profile restaurant in London firstly recognising the significance of providing vegan options to their customers but also supporting a vegan start up business!’

For people who are trying Veganuary this year, a vegan addition to a favourite spot could be just what they need to keep them on track.

You’ll be able to grab one of these burgers from Chelsea, Canary Wharf or St Katharine Docks until 31st January.