Customers can also order a range of foods to go, including hot and cold pies, quiches, and sandwiches.

Suzy Spoon’s Vegetarian Butcher has been going since 2012, when founder Suzy Spoon spotted a gap in the market. She told Food and Drink Business in 2017, “there was a real lack of delicious vegan food in the supermarkets, things were just so highly processed.”

“The flavors were terrible. Rubbery and just awful,” she added. Spoon – who has followed a vegetarian diet for more than 30 years — wanted tasty meat-like products made with healthy ingredients. She knew that others must feel the same.

“I just thought ‘vegans and vegetarians, they’re not about processed. That’s like the opposite of what we’re all trying to do,'” she added. 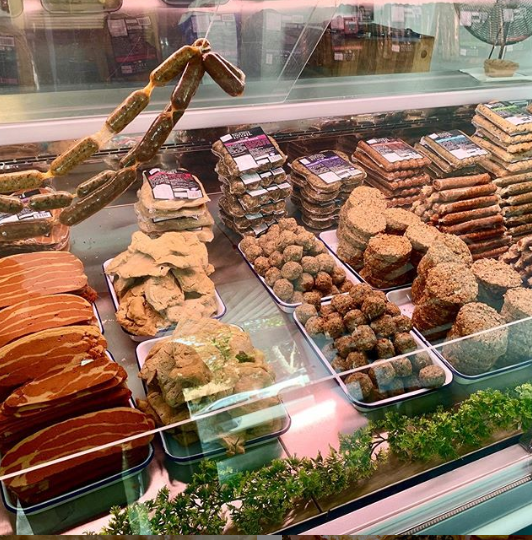 While she started off with vegans and vegetarians in mind, Spoon’s products — which include Smoked Chilli Sausages, Smokey Rashers, Schnitzel, and Seitan Fillets — appeal to meat-eaters too, thanks to the rise of flexitarianism.

As consumers learn about the environmental, ethical, and health benefits of consuming plant-based foods, more and more are opting for vegan meat over traditional animal-based products.

In response to rising demand, vegan butcher brands — like the Netherlands’ Vegetarian Butcher and Canada’s the Herbivorous Butcher — are launching around the world.

Spoon told SBS in 2018, “I certainly don’t think this is a flash-in-the-pan trend, but the result of all the information we’re now exposed to thanks to the internet.”

“Most of us were kept in the dark on the issue of animal welfare,” she continued. “And the environmental concerns of eating meat and animal products with every meal.

“Now that we’re all becoming aware, changes are being made and it’s about time,” she said.