The Nestlé-owned plant-based brand has also launched six other products, which will be available in a number of grocery stores across the U.S. These include the Awesome Cheeseburger Burrito, Kung Pao Chik’n, and Awesome Pasta Puttanesca.

U.S. consumers are seeking out more plant-based meat products. Earlier this year, a study revealed that nearly 25 percent of Americans are reducing their meat intake and eating more plant-based foods for their own health and for the environment.

The ongoing pandemic has encouraged even more people to reach for plant-based meat. In the 16 weeks leading up to April 19, vegan food sales jumped 90 percent.

The pandemic has hit the meat industry hard. Thousands of infections among workers have forced a number of processing plants to close or run at a reduced capacity. 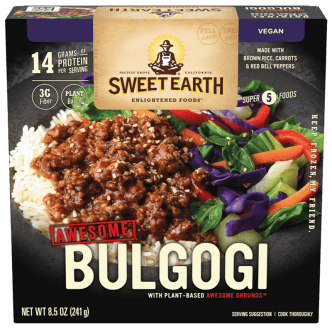 Sweet Earth has launched a number of new products.

Jessica Vasisht, the vice president of Sweet Earth Foods, said in a statement: “More than ever, today’s consumers are looking for plant-based options that are packed with flavor and convenient, especially when it might be harder to find traditional meat products on shelves.”

She added: “Sweet Earth is meeting this demand by offering new plant-based options that appeal to flexitarians by satisfying cravings of traditional foods, but also provides plant-based nutrition and goodness in an easy, ready-to-heat format.”

The brand—which is also intending to launch vegan jerky and deli slices—makes all of its products with “wholesome” ingredients, including vegetables and spices. All of its new products heat up quickly and simply either in the microwave or the oven.

Target has added a handful of new vegan products to its shelves recently. These include Annie’s cheddar-flavored Organic Vegan Mac Pasta and Sauce cups and vegan mayonnaise under its own Good & Gather label.