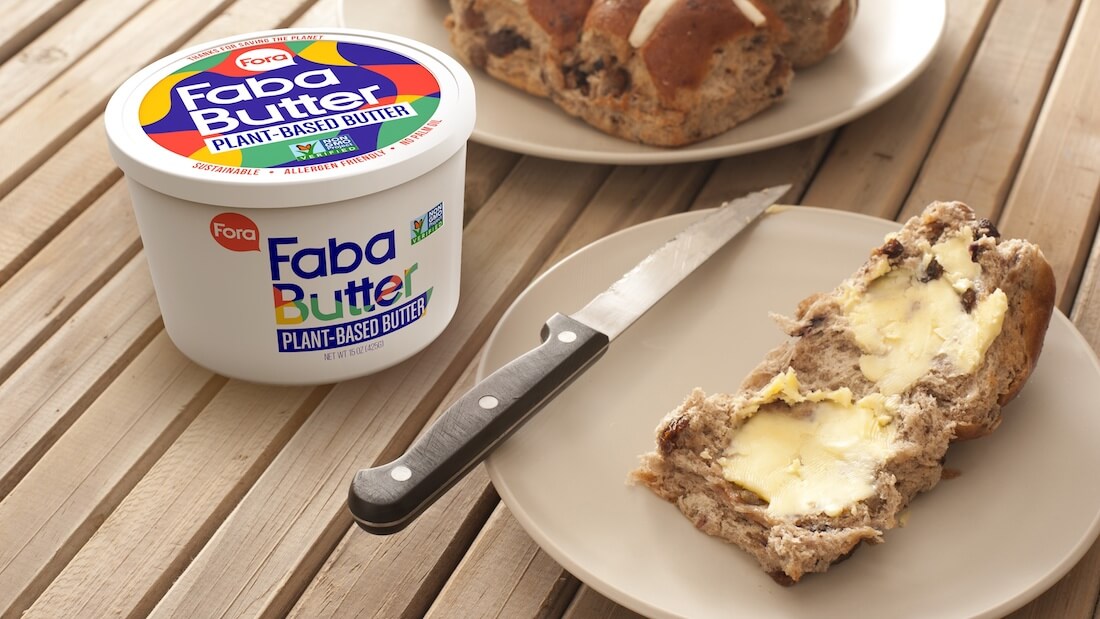 A vegan butter made from coconut cream and aquafaba, the brine from a can of chickpeas, will launch in Eataly grocery stores across the U.S.

Called “FabaButter,” the innovative dairy-free butter was created by Brooklyn-based vegan food startup, Fora. According to the brand, FabaButter is the first and only sustainable vegan butter made from upcycled aquafaba. It melts and spreads like traditional butter and can be used as a 1:1 replacement in cooking and baking. Additionally, FabaButter boasts four times less the carbon footprint of dairy butter, is made from non-GMO ingredients, and contains no palm oil.

Fora CEO Aidan Altman and CFO Andrew McClure founded the company in 2017 with the mission of creating sustainable dairy-free products that not only taste good but can also be used as a functional replacement for conventional animal-based products. They first began experimenting with creating vegan butter while still residing in Chicago and found that using aquafaba yielded a dairy-free spread that tastes, cooks, bakes, spreads, and melts just like dairy-based butter.

Though new, FabaButter has already created a buzz in the food world. Vegan chef and cookbook author Terry Hope Romero has been an avid supporter of Fora on social media and regularly shares baked goods made using FabaButter on her Instagram. It was featured in “The Future Market” section of the 2018 Summer Fancy Food Show, a trade show that showcases specialty foods, where it was an awarded a “sofi” (specialty outstanding food innovation) award for best new product in the “dairy, yogurt, and dairy alternative” category.

In addition to launching in all US Eataly stores, Nosh reports that Fora just closed a $1.4 million funding round led by vegan venture capital firm New Crop Capital and Blue Horizon.“I saw two very energetic, enthusiastic entrepreneurs with a great product that has great potential across multiple distribution channels,” said New Crop Capital senior venture partner Dan Altschuler Malek. “All the different ways we can think a consumer will use a traditional butter, they can substitute for a plant-based option with this product. Substitute, not sacrifice for.”