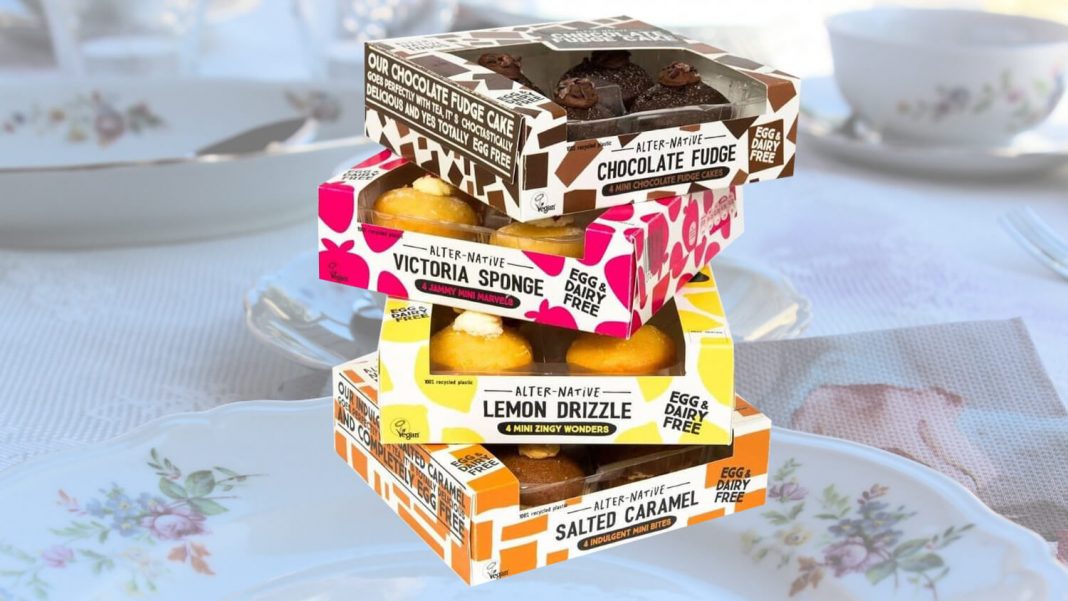 Lemon Drizzle, Salted Caramel, Victoria Sponge, and Chocolate Fudge are the new flavors set to be available in the range, according to Instagram account Accidentally Vegan. The brand will also launch Free OGGS this year, a bottled liquid egg substitute made from aquafaba – aka chickpea juice – a popular egg replacer used in home vegan baking.

Alternative Foods believes in improving the welfare of animals, helping the future of the planet, and helping to improve the lives of people with its egg and dairy-free sweet treats. By offering them at affordable prices too, it also aims to ensure that no one misses out on its ethical products.

As well as accessibility, it is important to the brand that its supply chain is as “squeaky clean” as possible.

Not only is the packaging recyclable, but it was also chosen due to the low carbon emissions of the manufacturing process. To avoid food waste, excess chickpeas from its liquid vegan egg product will be sent to an animal shelter to feed the animals.

“We know we can make amazing food and do good for the world at the same time,” Alternative Foods notes on its website. “What began as one person’s dream to eat cake without cruelty, evolved into an alternative business model. We don’t only believe in alternative foods but in an alternative way of doing business.”

We’re so happy with our egg and dairy free, mini cake samples, which include this Victoria Sponge. We think it’s delicious and looks great and so does everyone who’s tried it so far ???? ⠀⠀⠀⠀⠀⠀⠀⠀⠀⠀⠀⠀⠀⠀⠀⠀⠀⠀ What do you think? Let us know below ?? ⠀⠀⠀⠀⠀⠀⠀⠀⠀⠀⠀⠀⠀⠀⠀⠀⠀⠀ Alternative Foods. Affordable alternatives to yummy everyday foods, will be on supermarket shelves in early 2019. If you can’t wait that long visit our site (in bio) and join the #Oggs revolution today…. ⠀⠀⠀⠀⠀⠀⠀⠀⠀ #vegancakes #eggfreecakes #freefrom #AltFoods #VeganEgg #DairyFree #Aquafaba #WorldVeganMonth #VegansofIG #veganfoodshare #whatveganseat #veganbaking #vegancooking #VeganRecipes #VeganUK #vegancooking #alternative #alternativeoggs #oggs #eggfree #cruetlyfree

Alternative Foods’ new range of cakes adds to the growing number of vegan products available in UK supermarkets, with major chains such as Tesco, Aldi, Morrisons, Waitrose, and Sainsbury’s now offering a multitude of vegan meat, cheese, and milk items in their stores.

Also tapping into demand for egg and dairy-free baked sweet treats, Morrisons launched a new range of vegan cupcakes at the end of last year, including Red Velvet and Chocolate. The cakes are a part of the supermarket’s veggie and vegan V Taste range, launched in September last year.

Alex Dodd-Jones, Morrisons vegan buyer, said in a statement at the time, “More and more people are eating vegan and we are listening and responding to customers who tell us that they want more vegan options.”