Next time you’re traveling through the airport, make sure you don’t leave behind a suitcase filled with unlabelled vegan cake mix in blue plastic bags. It could cause chaos.

Cleaners at London’s Gatwick Airport found a suspicious suitcase on a shuttle train. It was stuffed with blue bags, each filled with white powder.

Police thought the find was the beginning of a huge drugs bust. Turns out, they’d just discovered some of plant-based pizza chain Purezza’s vegan cake mix.

Sussex Transport Police Tweeted, “huge drugs bust at Gatwick airport. In collaboration with the Home Office, powders tested and discovered to be vegan cake ingredients.” It continued, “please label your foods and bring samples of cakes next time you visit.”

Luckily, no arrests were made before the ingredients were tested. British Transport Police confirmed, “we received a report at 1.34pm. Cleaners found a bag contained many bags in the first-class compartment of a train. Obviously it was tested and found to be exactly what it says in the Tweet. We spoke with the owner and there were no concerns.” 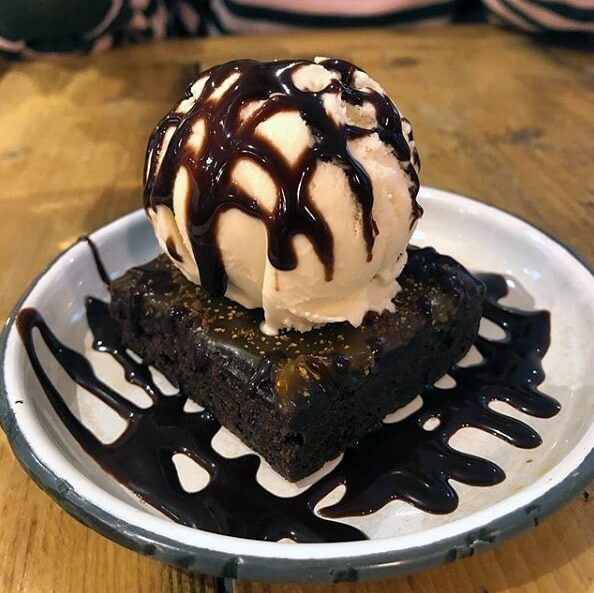 Purezza serves a variety of cakes on its dessert menu, including chocolate brownies. | @veganolmazol

Purezza has two locations, in Brighton and Camden, London. The cake mix was on its way to the chain’s Brighton restaurant.

Purezza’s menu is packed with creative vegan pizzas — including the Parmigiana Party, which features aubergine parmigiana, smoked mozzarella, and crumbled sausages, and Telling Porkies, which is topped with marinated pulled BBQ pieces — but it also serves desserts.

Purezza Tweeted back to the police, “so, we had quite an eventful time transporting some of our ingredients today. Thanks for going easy on us guys. A slab of cake all round is in order when you’re next in Brighton.” Sussex Transport Police retorted, “your secret recipe is safe with [us].”

Twitter-users found the vegan cake debacle highly amusing. One replied, “keeping the streets free from cake, kudos.” Another added, “officially my favorite Tweet of the day!” They added the hashtag “#GreatBTPBakeOff.”