UK Vegan Camp Out, the largest outdoor vegan festival in the country, is set to return for its second annual festival this August. The event will feature a lineup of activities, vegan food vendors, vegan celebrities, musicians, artists, health experts, and more. Popular vegan comedian, television host, screenwriter, and director of the vegan mockumentary “Carnage,” Simon Amstell, will headline the event with his stand-up act.

38-year-old Amstell has had a long career in media. He hosted British television shows “Popworld” and “Never Mind the Buzzcocks,” co-wrote and starred in the show “Grandma’s House,” and has performed at major stand-up comedy festivals. He has also been vegan for a number of years. In an interview with Vice, Amstell revealed “I watched a film called ‘Earthlings’ years ago and it helped to upset me into veganism, so I thought what I could do was direct a film that was funny about the same subject so that people could watch it and feel wildly entertained as well as feeling mildly upset.”

Last year, he debuted the mockumentary “Carnage,” a short movie set in the year 2067, when using animals for food has been banned and veganism is the norm. The story is centered around a group of young people who are shocked to learn that eating meat was once considered a cultural norm. The film explores the history of veganism, activists, and the events that ultimately led to a vegan future, not afraid to mock activists of the past. “[W]e realized that we needed to take the piss out of vegans more than anything for this to work,” Amstell said. “So if you are a person who currently eats animals and you think vegans are ridiculous, then this is the film for you.” 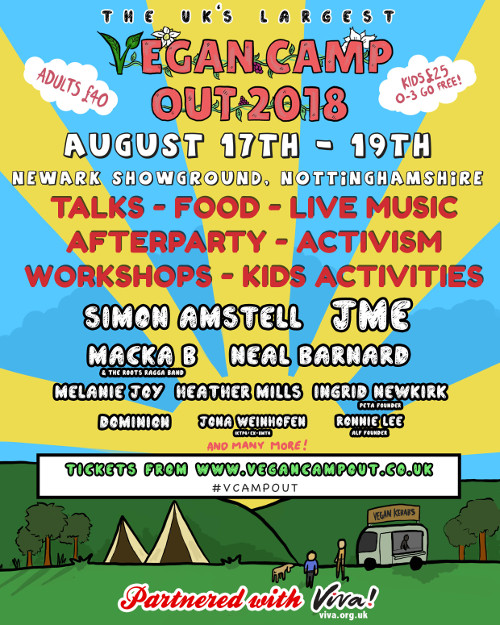 Also featured at this year’s event are vegan reggae artist Macka B, Melanie Joy, Neal Barnard, and more. Event organizers expressed that they wanted to make this year’s event bigger and more accessible than last year. There will be more kids entertainment, British Sign Language interpreters, a designated music stage, bar, more food vendors, a yoga/fitness/health/meditation marquee, an afterparty that goes on until 2 am each night, and more. The event will also feature a screening of the vegan documentary “Dominion.”

UK Vegan Camp Out 2018 will run from August 17th to 19th at Newark Showground in Nottingham. £5,000 of ticket sales proceeds will be donated to Viva, a UK-based animal rights charity that campaigns to raise awareness about the benefits of veganism for the planet, people, and animals.