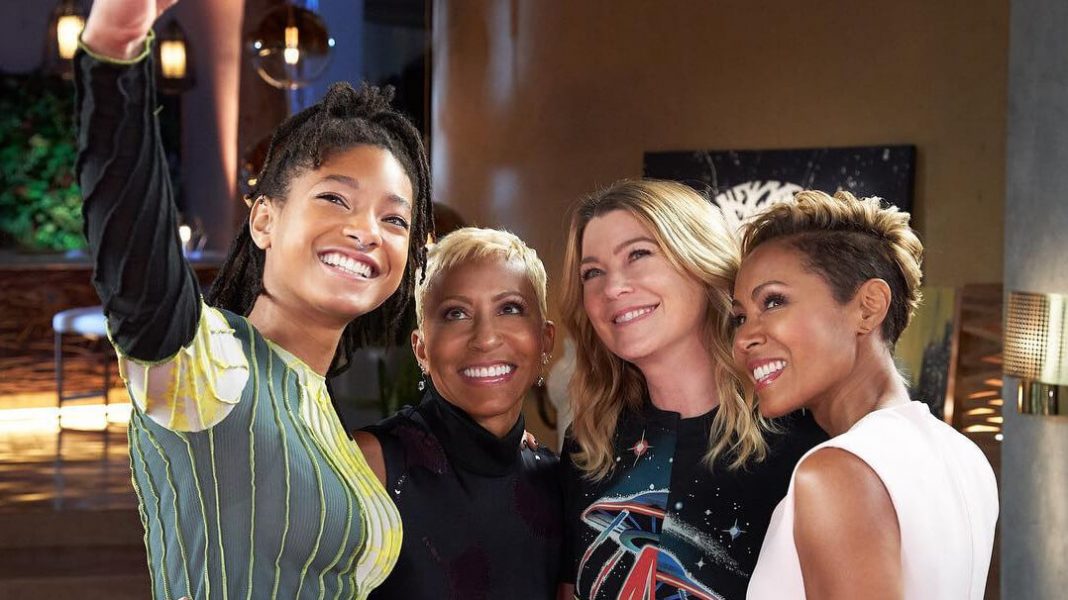 In the most recent episode, “Interracial Marriage with Ellen Pompeo,” the four women speak candidly about the “Grey’s Anatomy” star’s experience with being in an interracial marriage and about being a good ally to people of color.

“It’s only been 51 years since the U.S. Supreme Court decriminalized interracial marriage,” Pinkett-Smith said. “New statistics reveal a dramatic increase in people marrying outside of their race. Ellen Pompeo is one of them.”

Pompeo is married to music producer Chris Ivery, who she met in 2003. The couple wed in 2007 and have three bi-racial children together.

“We did a show dealing with race issues with women of color and white women. And we’ve been dealing with trying to understand how to bridge the gap,” Pinkett-Smith continued, adding, “It’s hella difficult.”

The entire group agreed with the statement, acknowledging that they are never sure how someone will react when talking about race with others.

Pompeo stressed that it’s an important conversation to have, adding that refusing to talk about it is a problem that needs to be addressed. “You need to talk about it more if you’re afraid,” she said.

The award-winning actor shared a story from a couple of weeks ago, where she invited friends over to the home. When she introduced herself to a friend of her daughter Stella’s, a little girl of color. Pompeo said that she could tell the friend was surprised, and maybe even nervous, to meet her.

“As moms and dads, we have the responsibility to expose our children to all different types of people. To just show them the differences in the world,” the 49-year-old actor said.

Willow added, “To teach your kids not to be afraid of different kinds of people.”

Ellen Pompeo on Being an Ally

“I know there are times where you may not have gotten a warm welcome or support from other women of color” Pinkett-Smith said, speaking about Pompeo’s relationship with her husband and his family.

Last week, Pompeo was one of many to speak out against the A&E documentary focused on the family of KKK members, describing it as “sensationalist” and promoting the hate group. She added that she received pushback from fans for her use of the Black Power emoji after the network pulled the series, but concluded, “As Caucasian people, it’s our job, it’s our task, it’s our responsibility to speak up in every single room we walk into. It’s our job because we created the problem.”

Later in the conversation, the group addressed questions from readers about being in an interracial relationship. One white woman, whose fiance is Black, wrote in asking what she should know.“Communication is the key to any relationship,” Pompeo said.

“I would imagine that with Black men and white women, white women have a sense of oppression. …You know, just being a woman,” Pinkett-Smith added. “I have dated some really wonderful white men but it was interesting, the fact that you’re dating someone who has no idea what oppression or any kind of… you know, he’s at the top of the food chain. […]it’s a very hard thing for him to be able to relate to. It was always the factor in the relationship that made it break.”

The group agreed that communication is the most important part of any relationship.

Pompeo went vegan last April at the advice of Dr. Kristi Funk, an expert on breast health and the author of “Breasts: An Owner’s Manual“. She wasn’t alone in making the switch to a plant-based diet for her health.

Speaking to People Magazine, Pompeo said, “[Dr. Funk] told me she turned her three kids completely vegan and I came home from my appointment with her where she basically gave me [the information] … and I said, ‘That’s it, we’re all vegan.'”

Pompeo added that so far, she and her family are feeling healthier on their new diet and she even finds cooking much easier than before.

“Grains and lentils and rice and beans, everything’s in the pantry already. You just have to get vegetables, but vegetables stay good for a week — and I think we all feel better,” she said.