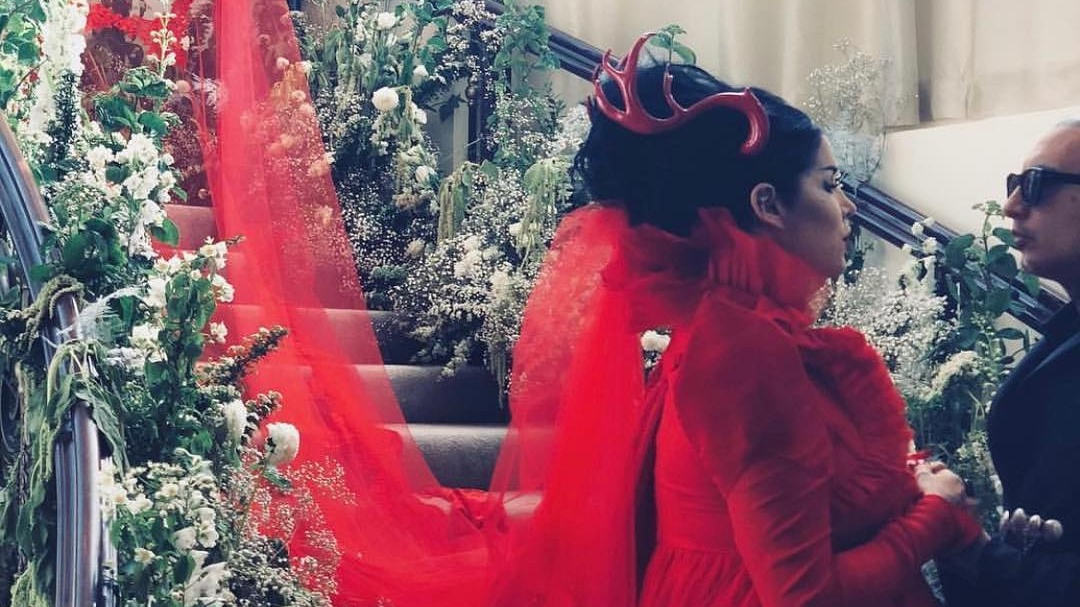 The newlyweds showed their devotion to each other in a gothic, red-and-white venue decorated with vegan wax candles, vegan leather couches, and vegan fur carpets, living up to the hype of throwing the “most epic vegan wedding” of all time. Guests were asked to dress only in black.

“I don’t think @prayers [seyer] and I were prepared to cry as much as we did – in the most beautiful way possible,” Von D wrote on Instagram following the ceremony. “The silent moments prior to beginning our vows where we held hands and stared into each other’s eyes the entire world dissipated around us – that was just as meaningful to us the vows we made.”

Von D’s wedding dress was a custom blood-red gown fit for a demonic queen: trimmed with red ruffles, a floor-length cape, and a matching pair of red horns, which she wore under her one-of-a-kind red veil by designer Adolfo Sanchez. Her vegan wedding shoes were designed by London-based alternative footwear designer, Natacha Marro. Seyer wore a matching black lace veil and a custom black suit with metal details.

@Prayers and I are off to a secret undisclosed destination for our meditative honeymoon… con todo el amor en el mundo, y un million besos! ❤️?

The couple’s wedding cake was a breathtaking vegan red velvet castle that Von D designed herself. The baker was not disclosed. Rather than choose a traditional wedding cake, the couple opted to project video footage of themselves waving to their guests onto the cake.

Following the ceremony, the couple departed to an undisclosed location for a “meditative honeymoon.” Seyer soon took to Instagram to express his love for his new bride, stating “forever isn’t long enough.”

Earlier this year the couple announced they are expecting their first child together. Seyer has a daughter from a previous relationship.