Miley Cyrus is known for her unabashed support of counterculture movements – and cannabis is no exception.

In June 2017, the singer told talk show host Jimmy Fallon that she quit smoking weed in order to focus on her work. But, that’s no longer the case. Cyrus still puts her work first, but she revealed in a recent interview with The Sun that she enjoys lighting up – with her mom, Tish Cyrus.

“We toke a little. Every now and then, you know,” she said. “My mum got me back on it. When I’m just working I don’t think I function at my highest, most intelligent, most being-able-to-be-as-aware-and- as-present, so I don’t smoke when I work.” 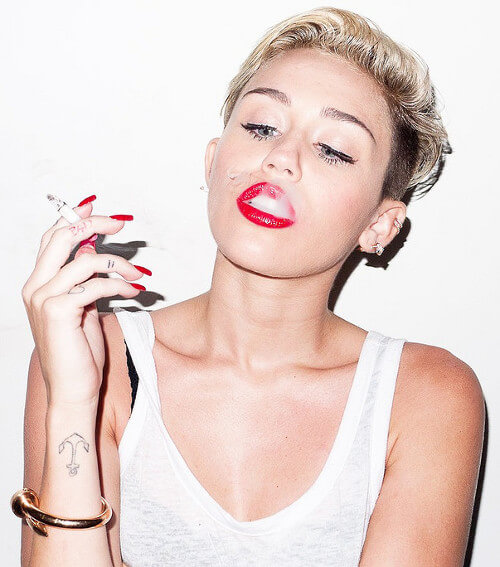 Cannabis has been a controversial drug in the United States, even pre-dating the Marihuana Tax Act of 1937, which made possession and transportation of cannabis illegal under federal law.

While the drug became increasingly popular among youth in the early 20th century, a number of propaganda films taught the public to fear it. In the 1927 silent film “High on the Range,” a young rancher named Dave smokes half a joint and becomes a murderer. In “Reefer Madness” (1936), a smoke session devolves into rape, manslaughter, insanity (literally), and suicide.

Since then, stoners have largely existed as part of counterculture, save the occasional appearance in the mainstream with the help of celebs like Snoop Dogg and popular comedies like “Pineapple Express” (2008).

Cyrus said during her interview with Fallon that she used a little more often than she’d like, even admitting that she was high during her last appearance on the show. “I’ve always been very stoned on your shows. I don’t know if you know this, everybody,” she said.

The pop star now seems to have found a balance that works for her. In the same interview, Cyrus also spoke about her recent performance at the London night club G-A-Y, where she rode a giant inflatable penis and danced to RuPaul on a confetti-covered floor. She takes it all with a sense of humor.

“Women have found this new thing that we’re allowed to make sex funny and sexuality funny,” she said. “…It is really a cool thing because humor is super sexy and it’s about being able to not make sex so serious and something that we can’t talk to people about.”

Cyrus has long been a vocal feminist and supporter of the extended LGBTQ community. In the interview, the 26-year-old, who identifies as pansexual, said that she is gender neutral.

“I really do feel kind of just gender neutral, so I hate to just get on this, like, kind of feminist rant because I’m also a humanitarian. I’d rather focus on human rights and men also feeling super comfortable with themselves, just everyone feeling comfortable,” she added. According to many, feminism is about more than women – the concept, like Cyrus herself, supports equality for all.

Cyrus regularly uses her platform to send political messages. On Tuesday, she took a stand against gun violence with a DIY t-shirt that reads “protect kids, not guns” while clad in a plaid-and-faux-fur-hat ensemble.

The “Nothing Breaks Like a Heart” singer also champions animal rights through her vegan diet, love of cruelty-free fashion (she also recently launched yet another collection with Converse), and her passion for welcoming rescued animals into her home.