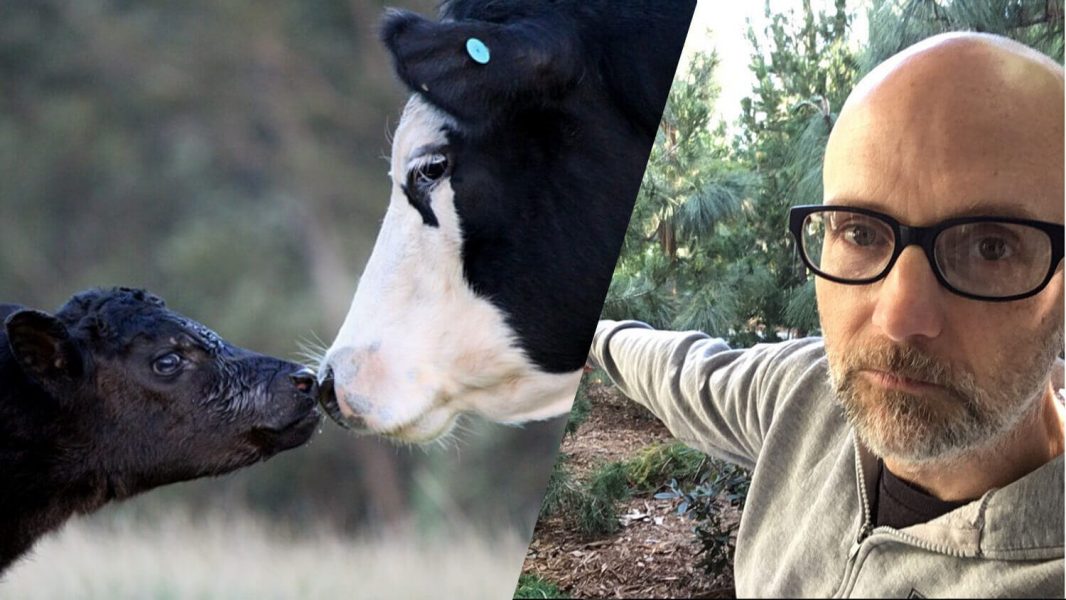 Vegan musician Moby believes that mother cows and their calves belong together, no matter what.

The longtime animal activist took to Instagram last week to share a photo of a mother cow named Maybelle and her baby, Eclipse, residents of the farm animal sanctuary The Gentle Barn Tennessee. “How it should be,” he wrote.“Mother and daughter: rescued, safe, together. #animalliberation.”

According to The Gentle Barn, Maybelle spent her entire life as a dairy cow. Like humans, cows will only produce milk if they have a baby to feed. In order to induce milk production, farmers will artificially inseminate cows, then separate mother and child just days – and sometimes, hours  – after birth so the milk can be sold. The cycle repeats itself until the cow can no longer keep up with the demand from milk production and she is sent to slaughter. The average dairy cow lives for four to five years, compared to her natural lifespan of about 25 years.

How it should be. Mother and daughter: rescued, safe, together. #animalliberation @thegentlebarn

When Maybelle was no longer able to produce enough milk, the farmers reached out to The Gentle Barn to give her a new home. When rescuers noticed that the former dairy cow seemed to be searching for a baby, as mother cows are known to do when separated from their young, The Gentle Barn reached out to the farm and found that she had nine-month-old baby, later named Eclipse, who was allowed to join her at the sanctuary.

The story of Maybelle and Eclipse is not typical of the dairy industry. In most cases, a female calf will grow up to be a dairy cow like her mother. Male calves, who cannot produce milk, are typically destined to become veal. According to a recent episode of the BBC series “Disclosure,” which explored the cruel reality of the dairy industry, many farmers kill male calves via a bolt gun to the head because they are not as profitable as female cows.

Moby, a vegan since 1987, has long used his platform to raise awareness of the lives of all forms of animal exploitation, ranging from the factory farming industry to forms of entertainment such as circuses and zoos. Last July, the musician listed his $1.3 million New York home on the market in order to donate the profits to his animal rights foundation and other charitable causes.

Twice this year – in April and July – Moby sold off records and equipment from his prized music collection and donated the proceeds to the Physicians Committee for Responsible Medicine (PCRM), a nonprofit medical association that promotes the health benefits of a plant-based diet.