In a video titled “Finding True Love!“ vegan celebrity Steve-O, best known for his risky antics on shows like “Jackass” shows off his lighter side, by feeding stray dogs and making one his life-long companion.

The star recently went to Peru to mountain climb for a TV series. And while he intended to find a street dog as a temporary companion for the trip – long story short, he got a lot more attached than he anticipated. 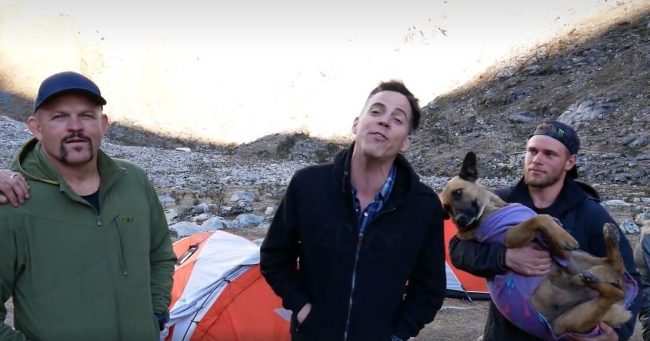 On his first day, he bought some dog food and went around the streets feeding dogs. “None of them wanted anything to do with me. Until I met Wendy,” he said.

She was sleeping on the street and got up to eat the food he held out while being showered with compliments and affection. Steve-O said right away, they had a connection, but as he was filming a TV show and had to go into a building – he expected to never see his newfound canine friend again. Later that night upon heading out for dinner, ‘Wendy’ along with many other friendly dogs came to greet Steve-O.

“It was like she told the dogs that I was cool.”

Wendy followed Steve-O and his friends for over 20 minutes to his hotel, where he attempted to sneak her in, cradled in his arms. Hotel Management didn’t allow a dog to stay, but eventually relented to let Steve-O and a mate give the dog a bath. Being the kind-hearted guy he is, Steve-O decided to spend the night in a tent with the street dog, rather than resting in a hotel without the dog.

The very next day, Steve-O took this dog to the vet to be treated for worms and fleas, vaccinated and rescued her from a life on the streets. Wendy joined Steve-O and his crew for mountain adventures and the two have become very bonded. “I love this dog so much, she’s already got a flight to L.A”. Steve-O adds he intends to buy her a flight wherever he goes and take her everywhere for the rest of her life.

If you’re as heart warmed and inspired by Steve-O’s acts of kindness as we are, the stigma of feeding and helping homeless animals is on it’s way to dissolving.