Vegan fast-casual chain, By Chloe, has partnered with British food delivery service Deliveroo to offer customers a limited-edition vegan poutine in honor of the highly anticipated royal wedding between Prince Harry and Meghan Markle. Wedding diet or not, this veganized Canadian classic is reportedly Markle’s favorite meal, and the new London By Chloe is one of her go-to restaurants, according to Metro UK.

Poutine is a traditional Canadian dish that originated from the Quebec province, though it is slowly beginning to attract some international attention. In its most basic form, poutine is made of cheese curds and gravy piled on top of a bed of french fries. By Chloe’s vegan version is made with air-baked shoestring fries, seitan chorizo, cashew-based mozzarella, vegan gravy, and a Chipotle-style aioli.

By Chloe is typically known for its healthy and veganized renditions of familiar fast food items, such as burgers, mac and cheese, meatball subs, and sweet treats. Although this new dish is somewhat unique to the menu, the company has proven that it has ambitious goals far beyond the basic vegan burger. Earlier this month, the restaurant acquired a $31 million investment to expand its locations and prepare for future “global domination.” This sizeable investment followed just months after a $13 million investment that secured the chain restaurant’s UK debut. 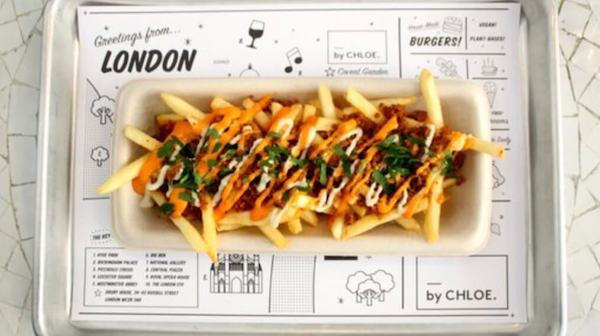 By Chloe put vegan pputine on its Deliveroo menu. | By Chloe

The By Chloe poutine will only be available from now until the couple says “I do” on May 19. With the wedding date just weeks away, Deliveroo customers only have a short time to enjoy this rare menu item. As for the royal couple, instead of bearing gifts, they have asked friends and family to lend their generosity to seven hand-picked charities, two of which support environmental conservation efforts.

Markle noted her interest in eating a predominantly plant-based diet during an interview with Reader’s Digest last year. “I try to eat vegan during the week,” she told the magazine. The actor and future dutchess is also passionate about animal rights issues and openly refuses to wear fur.

By Chloe’s vegan poutine is exclusively sold through Deliveroo, meaning customers cannot walk into the restaurant and order it. However, the delivery service promises to get meals to customers within half an hour (within their delivery radius).