(Updated December 21, 2019) | Five years ago during the holiday season, Michelle Carrera and her four-year-old son set out to volunteer at a vegan soup kitchen in NYC. Finding not one, Carrera decided that she and her son would make vegan chili and distribute it in the street. It was that simple act of positive activism that sparked the creation of Chilis on Wheels, a volunteer-run vegan charity that provides hunger relief across the country.

“Chilis on Wheels started organically and continues to grow that way,” Carrera told LIVEKINDLY in an email. Feeling burned out from racial justice activism, she wanted to find a way that she could make a positive impact while keeping in line with her values. On Thanksgiving Day in 2014, the 20 vegan chili bowls that she and her son made went so fast that they vowed to make more.

“My son and I continued to make different vegan meals every Saturday and take it out to the houseless community in and around Tompkins Square Park (Lower East Side) and soon other people joined us,” Carrera said. The NYC chapter has been active for four years now and the charity has 12 chapters across the nation, from Boston to Honolulu. After Hurricane Maria devastated Puerto Rico in 2017, Carrera and her son moved to the island to open a community house where weekly vegan education events are held. It is also home to rescued chickens. 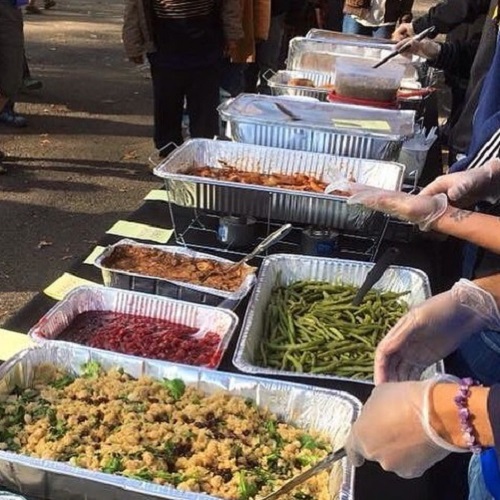 Respect for Other Species and Each Other

Every year, Chilis on Wheels holds a large vegan Thanksgiving feast, where thousands of meals are served and sent out to communities across NYC. The charity’s goal is simple but powerful: to make veganism accessible to all communities through meal shares, building a support network, and clothing drives.

Carrera explained that Chilis on Wheels strives to dismantle systematic barriers, like
“[f]ood deserts, lack of time for cooking when having to work more than one job, lack of access to a kitchen due to inequalities in housing,” that prevent people in low-income communities from practicing veganism. Many organizers for Chilis on Wheels come from low-income backgrounds themselves.

“Our meal shares are places where we all come to eat, to gather, to connect, to grow,” Carrera said, “where we share information about healthy eating, veganism, respect for other species and each other, where we support one another through the ups and downs of life, and where we can stand up for and by each other through gentrification, discrimination, and injustice. A united community is a powerful community.” 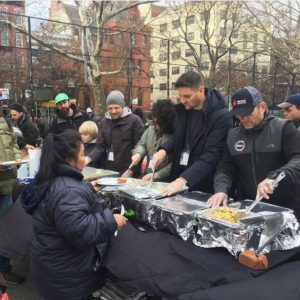 Empathy is a powerful tool in uniting communities. | Chilis on Wheels

The Difference Between Charity and Solidarity

Since founding Chilis on Wheels, Carrera explained that she has learned invaluable lessons about standing up for those marginalized by society.

“I’ve seen how communities are shaped and the importance of showing up every week for those on the edges of our society, how that builds trust and leads to a deeper relationship of support,” she said, adding that she has also learned the difference between “charity and solidarity.”

Practicing solidarity has become a cornerstone of Chilis on Wheels’ mission. “We see, time and time again, how most of us are capable of feeling empathy which leads to solidarity, or a feeling of walking alongside someone and supporting their freedom and liberation,” Carrera said. To Chilis on Wheels, empathy is a powerful tool in uniting communities.

“We just need the opportunity to see others as ourselves, whether that is people of different backgrounds, or non-human animals, once we get to meet individuals, our barriers against connection and compassion come crumbling down. We root into emergence, trust over transaction, community over isolation, listening over helping,” she continued.

Realizing the importance of this, Chilis on Wheels runs an online vegan mentorship program that matches participants with volunteers from similar socio-economic backgrounds.

Around the holidays, Chilis on Wheels regularly collects coats, hats, scarves, and gloves to distribute to the community as needed. “Every chapter is different, and some host holiday-specific events,” Carrera added. Anyone can volunteer for or start a local chapter.

How The Buy Nothing Movement Is Changing the Way We Shop

The Conversations of 2021 We Can’t Stop Thinking About

The Stories That Changed the Way We Think in 2021