According to Instagram account Nourishingnosh.blog, the sandwich comes complete with chunky pickle, lettuce and tomatoes, and “creamy vegan mayo.”

“I loved how the cheese wasn’t too creamy or artificial [and] how the mayo-smothered lettuce added lots of crunch,” the account posted. “The perfect sarnie for summertime lunches.”

It is unconfirmed whether the sandwich is available in every John Lewis cafe — the store has around 51 locations across the UK. A brand representative told LIVEKINDLY that the cafes will add more vegan sandwich options in the future.

John Lewis isn’t the first UK chain to offer a vegan cheese ploughman’s. Waitrose — a subsidiary of the John Lewis Partnership — began offering a grab-and-go version of the sandwich in 2018. Like the one served in department store cafes, the pre-packaged option includes sweet pickle and creamy mayonnaise.

Brits can get their hands on a number of vegan sandwiches in stores across the country. Supermarket chain Morrisons recently launched a vegan BLT, using “smoky carrot strips” in place of bacon.

Health food chain Holland & Barrett is currently trialing vegan to-go sections in a handful of its London locations, which include Tofurky Chipotle Chick’n sandwiches. Boots also offers a wide variety of plant-based options, including a vegan chicken and sweetcorn sandwich. 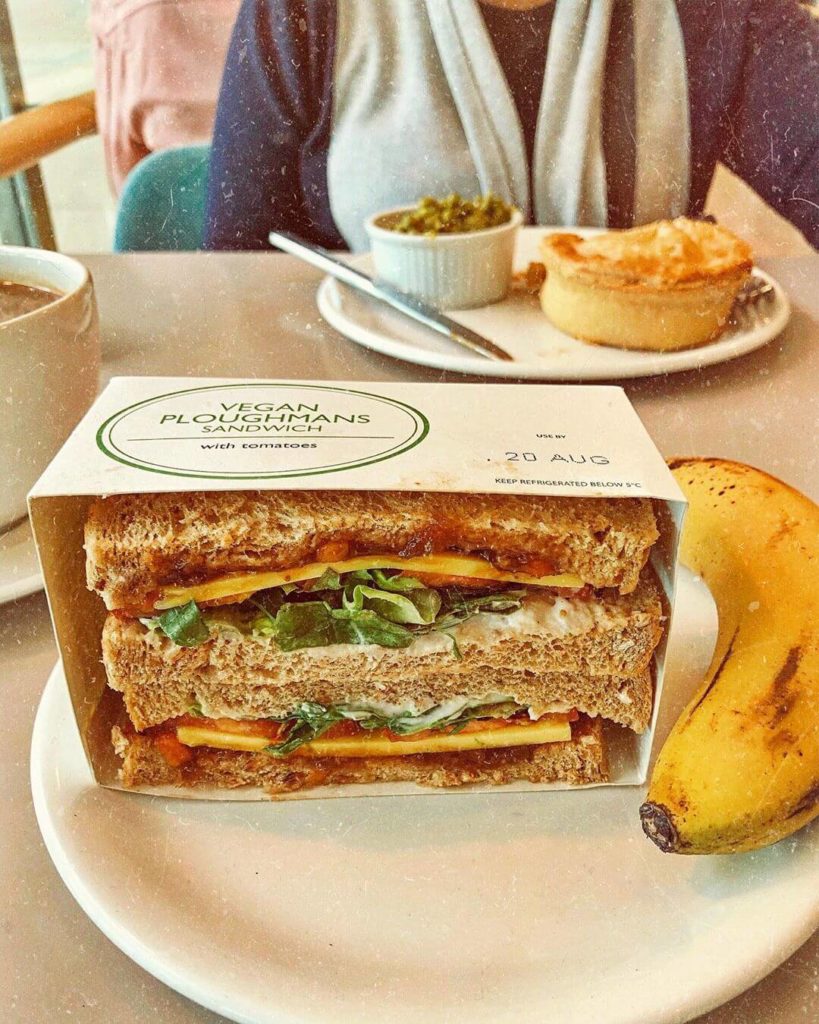 The increase in vegan options is due to rising demand from consumers. As they learn about the ethical, environmental, and health issues associated with meat and dairy, more people are reaching for plant-based foods.

According to a survey conducted by Sainsbury’s at the beginning of the year, 91 percent of the UK population now identify themselves as flexitarian.

Sainsbury’s has witnessed the benefits of this demand; it has seen a 65 percent increase in plant-based product sales year-on-year. The number of people searching for vegan food online at the supermarket has also increased by 85 percent.

“We’re seeing increasing demand for plant-based products,” said Rosie Bambaji — a plant-based buyer at Sainsbury’s — in a statement. “With the unstoppable rise of ‘flexitarianism’ in the UK, we are exploring further ways to make popular meat-free options more accessible.”