IKEA just launched a vegan burger. But the catch is, you can only get it in Canada.

IKEA opened Foodbox, a new outdoor dining concept exclusive to its Coquitlam store in Vancouver. The little white food truck is also the only place to get the new VÄXT Burger (växt is the Swedish word for “plant”). It costs $5 and comes served on a vegan bun with lettuce, tomato, red onion, and egg-free mayo. You can also add dairy-free cheese for just $0.50. An IKEA representative told LIVEKINDLY in an email that the patty is made from pea protein.

Other vegan options at IKEA’s Foodbox include its classic veggie balls and its new meat-free hot dog. IKEA tested the vegan hot dogs in European in May 2018, earning a 95 percent customer approval rating. Two months after its widespread European launch, IKEA announced that it had sold one million hot dogs. It’s now available at IKEA stores around the globe, where it is offered at a lower price point than the classic franks. The vegan hot dogs are also available in frozen packs. 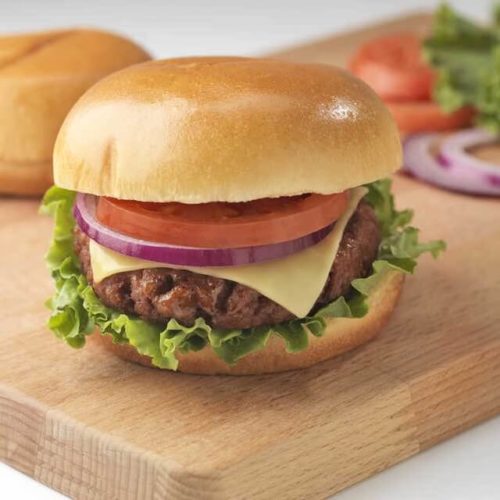 Both the veggie balls and vegan hot dog are vegetable-centric. The former is made from chickpeas, green peas, and carrots and the latter, kale, lentils, carrots, quinoa, and potatoes. But, IKEA is also developing a new, meatier version of its iconic veggie meatballs to appeal to omnivores using apple, potato, oats, and pea protein.

“Our ambition is to make healthier and more sustainable eating easy, desirable and affordable without compromising on taste and texture,” La Cour said.

Sustainability is part of IKEA’s core ethos and the company acknowledges that plant-based food has a significantly lower environmental impact. It recently entered a partnership with culinary entrepreneur Claus Meyer to work on a “broader overhaul” of IKEA’s menu. Meyer co-founded the two-Michelin-star Denmark-based eatery Nola.

According to Meyer, it is “cheaper to feed a population on a menu composed of organic vegetables than to feed the same population on a diet with a normal amount of meat of the lowest possible quality in the world.”

The VÄXT Burger is currently available only at IKEA’s Foodbox food truck in Vancouver. Its new vegan meatballs launch in Europe in August 2020, followed by a global launch later that year.