The young chef’s love affair with food began before he hit double-digits. When he was seven, his mother began suffering from hemiplegic migraines, which would paralyze half of her body for up to a day. It was then that McQueen, the second-eldest of six children, first learned to cook.

“It was when my mum was sick, my dad was going to work, so he taught me and my older brother how to warm up food and a few of the basics,” McQueen tells LIVEKINDLY on a Zoom call. “But I wanted to get more into it so my dad taught me how to fry stuff, bake stuff, and chop fast.”

“I was researching about what could make my mum better and I saw ‘veganism,’ so I clicked on it and I didn’t like the way that animals are treated for food and clothes, so I decided to become vegan and cook vegan meals for my mum,” he says. The first vegan dish he made was a barbecue jackfruit wrap, which remains a favorite of his to this day. 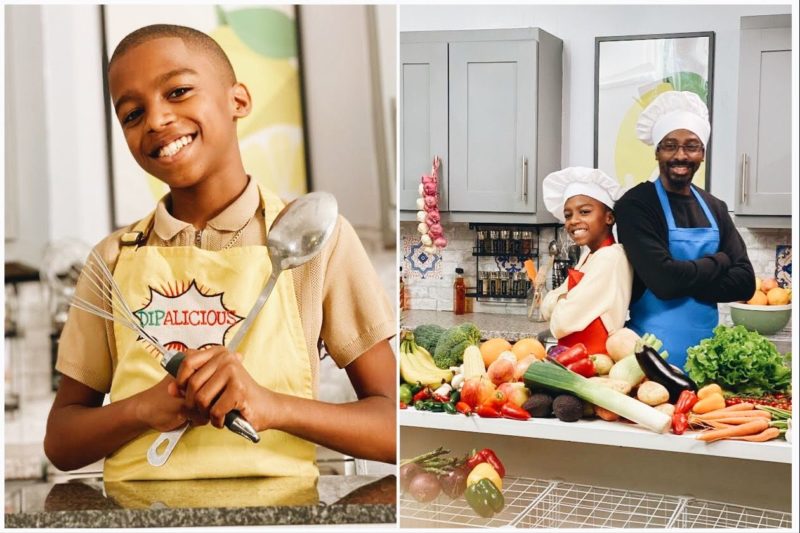 McQueen’s passion soon led him to start his YouTube channel, Omari Goes Wild, and in his first recipe video, uploaded in July 2017, he makes a vegan pizza. That same year, he founded Dipalicious, a vegan food brand that offers dips inspired by his Caribbean heritage, which also heavily influences all of his recipes. As well as this, he’s a believer in the power of great-tasting food.

“The thing that inspired my recipes is bringing people together with good food without harming animals,” he says.

The UK native has a passion for bringing people together through food, without animals that, shines through, whether he’s expounding the health benefits of plant-based food on YouTube or teaching other kids how to make vegan meals on his own cooking show, What’s Cooking Omari?, which began airing on CBBC, a BBC channel for children, late last year.

He adds that his mother is still his number one taste tester for new recipes.

McQueen’s dedication to his craft led him to become one of the world’s youngest restaurateurs at age 11 (American chef Flynn McGarry first began hosting dinner tasting pop-ups out of his California home at 11 1/2) in the summer of 2019. He had reached out to Roger Wade, the 53-year-old CEO of Boxpark, a London-based chain of food halls, over LinkedIn, sharing his aspirations to open a restaurant in the future.

But, “then he said ‘Why wait?’ And then he wanted to speak to my mum and then it actually happened and I was at Boxpark selling meals and it was really fun.”

In support of the young entrepreneur, Wade waived the £1,000 fee so McQueen could host a weeklong pop-up at Boxpark’s Croyden location. “I can’t believe my dreams are coming true,” McQueen wrote on Instagram ahead of the pop-up. Sharing a name with his food company, Dipalicious, the restaurant served vegan Caribbean fare.

“I’ve achieved a goal as I’ve got dyslexia I found it hard spelling stuff out and reading things,” he says. “But I wrote the whole thing and got it done and I’m so proud of myself. I’m bringing people together with good food without harming animals with that book, with easy-to-make recipes in there, and my favorite recipes.”

His favorite recipes from the book include chickpea curry and for dessert, vegan mango and coconut jellies.

McQueen’s entrepreneurial spirit has earned him a multitude of awards, including the TruLittle Hero Award from Cause4Children Ltd for being a business owner under age 12, the Proud and Gifted award for being a chef and youth empowerment speaker. He has guest-starred on the long-running British children’s television show Blue Peter and BBC radio. And, he’s lent his voice to Veganuary, a UK-based campaign that encourages people to go plant-based for the month of January.

But, McQueen isn’t done yet—he already has his sights set on two more goals. First, to become a restaurateur, “just like Gordon Ramsay,” only vegan. “I want to open my first restaurant and a chain of restaurants,” he says.

And he also aspires to launch a range of vegan ready-meals for children.