Made from 56 percent dark chocolate, Montezuma’s describes the confections as “soft centred, bite-sized and very addictive.” According to the company, customers requested a dairy-free version of its popular peanut butter-stuffed Easter eggs.

Founded by lawyers-turned-chocolatiers, Helen and Simon Pattinson, Montezuma’s began with a single shop in Brighton in 2000. The couple were inspired to enter the chocolate business by a trip to South America in 1999, where they came across several small chocolate shops, according to The Guardian.

Montezuma’s sources its chocolates fairly from co-ops in the Dominican Republic or Peru. The company was named one of The Guardian’s Top 10 Ethical Chocolate Companies in 2007. Everything is made in Montezuma’s West Sussex-based factory. 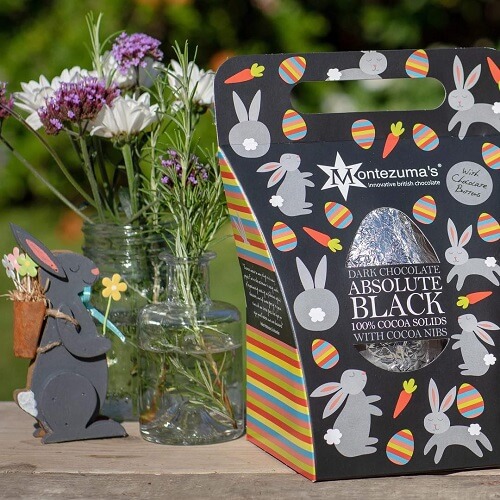 Vegan Easter Chocolate in the UK

Demand for vegan chocolate is on the rise across Europe but particularly in the UK, where people eat more chocolate that anywhere in the world, according to a March 2018 Mintel report. Analysts noted that demand tends to spike around holidays like Easter.

Montezuma’s carries a few other vegan options for Easter, including its Absolute Black dark chocolate egg and its Like No Udder dairy-free milk chocolate egg.