(Updated December 18, 2019) | It doesn’t feel like it should be possible, but it’s Christmas time again. It seems like 2019 — aka the year of vegan sausage rolls (thanks Greggs) — flew by in a flash, and now it’s time to start thinking about all the festive food you’re going to eat this December. UK supermarkets have really upped their game this year when it comes to vegan products, and Christmas is no exception. Here are 19 Christmas vegan food items you must try.

Sainsbury’s is offering a variety of vegan Christmas dishes this year, including a Vegan Trimmings Selection. The platter — available in the chain’s food-to-order range — includes 10 vegan mushroom sausages wrapped in vegan bacon and twelve mushroom stuffing balls. The vegan Pups in Blankets are also available to buy off the shelves on their own in packs of 10.

This year, Marks & Spencer is offering a wide variety of vegan festive options in its Plant Kitchen range. Its turkey-like Plant Kitchen Festive Roast — complete with cranberry and chestnut stuffing — will make the perfect centerpiece on your Christmas lunch table.

It might not be one for the Christmas table, but it’ll definitely get you in the festive mood around Christmas time. Leon’s Festive Wrap features baked sweet potato falafel, cranberry and clementine sauce, vegan sage and onion mayonnaise, crispy onions, and toasted pine nuts. The chain says, “our festive falafel wrap is a vegan lunch that tastes like you’ve topped Santa’s good list.”

Iceland has a big selection of vegan Christmas party food, including mini meat-free cheeseburgers and a No Duck Chinese Selection. For pudding, there are No Moo Chocolate Snowflakes. The dessert features a hard chocolate shell and a gooey center.

According to Asda, the new Vegan Gold and Chocolate Swirl is a festive dessert “nobody will be able to resist this Christmas.” The hard chocolate shell is filled with caramel sauce and chocolate mousse. For the main, the supermarket is offering a vegan wellington. It features a blend of chickpeas, cranberries, apricots, festive spices, and a sweet cranberry sauce.

There are plenty of vegan festive offerings to choose from at Tesco this year. Accompany this Butternut Squash, Mushroom, and Chestnut Wreath with vegan pigs in duvets (aka meat-free sausages wrapped in dairy-free pastry). According to the chain’s executive chef Martyn Lee, “[Tesco has] been working hard to make those festive moments simpler and tastier than ever.”

Starbucks has a number of vegan options in the UK all year round, including a tofu breakfast burrito and a dairy-free mac n cheese. Christmas is no exception. The coffeehouse chain has launched a new red beetroot Very Merry Vegan Wrap filled with crumbled butternut squash fritters, roasted red cabbage, and egg-free maple mustard mayonnaise.

Christmas just isn’t Christmas without a mince pie. Luckily, Greggs has you covered. After your vegan sausage roll, why not treat yourself to a mince pie for dessert? According to the chain, all of its pies are baked in its shops. They feature a “deliciously crumbly shortcrust pastry” and are filled with fruity mincemeat, Bramley apple, and candied orange and lemon peel.

To make the ultimate vegan Christmas roast dinner, you need lots of gravy, roasties, veggies, meat-free pigs in blankets, and bread sauce. Up until now, the latter has been a little tricky to find in mainstream supermarkets. Marks & Spencer has changed that. Its Plant Kitchen Bread Sauce is completely vegan. To make it, just add your favorite vegan butter and milk.

If you’re attached to the idea of eating pork pies throughout the festive period, Morrisons now has a vegan option for you. It’s just like the traditional version, only it features vegan meat made with pea and soy protein. Pie buyer for Morrisons Steven Halford said in a statement, “so many people across the UK are fond of eating a pork pie at Christmas. Our vegan and vegetarian customers previously couldn’t enjoy a pork pie but with our new meat-free product they can enjoy a great tasting alternative.”

If you’re planning a Christmas meal out with friends or work colleagues, Frankie & Benny’s has launched a three-course festive vegan menu. It includes a Tuscan soup, a dairy-free lasagna, and the Mince Pie No-Cheesecake. The creamy dessert is topped with mince pie-flavored drizzle and served with vegan ice cream.

Christmas evening calls for one thing: cheese and biscuits. Violife’s Epic Christmas Platter has three different dairy-free cheese options: Mature Flavor, Smoked Flavor, and Garlic & Chilli. According to the brand, “it is the most wonderful time of the year to be vegan and epic.” The platter is available at selected Sainsbury’s supermarkets.

Not a fan of conventional mince pies? The Co-Op’s Puff Pastry Mince Pies offer a different spin on the festive classic, thanks to the sweet puff pastry casing. It features the same traditional mincemeat filling and chunky sugar crystals on the outside.

If you’re a Christmas pudding fan, you don’t have to stray from tradition. Tesco’s Free From Christmas Pudding will give you the same taste but without gluten, wheat, milk, or eggs.

For some, Lidl’s chocolate-covered marzipan logs have become a staple treat over the Christmas period. Watch out and check the label before you purchase though, the Rum and Raisin flavor isn’t vegan, however, the plain and pineapple don’t include any animal ingredients.

Buying for children this Christmas? These Christmas Penguins are the perfect stocking filler for little ones; they’re free of milk, eggs, wheat, and gluten, but most importantly, they’re cute and tasty. Don’t have any children around you this Christmas? Buy them for yourself!

Hosting a Christmas or New Year’s Eve party? Break out the nachos and the breadsticks and serve with Morrisons’ dairy-free dip selection; it even includes creamy Basil Mayo and Onion & Garlic options.

Just when you think you can’t possibly fit in another roastie, there’s the cheese and crackers course to face. If you’re looking for dairy-free cheeses to offer your guest this year, Morrisons has launched a new coconut-based festive cheese range, including a Herb & Garlic Roule. It is also offering Wensleydale With Cranberries, Plain Soft Cheese, and Soft Cheese With Garlic & Herbs.

Hosting a Christmas Eve or New Year’s Eve party? VBites’ Cheezly & Cranberry Bites — available at Holland & Barrett — will make the perfect addition to the buffet table. The brand recommends serving them with fresh rocket “to add a peppery flavour to an already winning combination.”

Want to make your Christmas breakfast extra special? Drizzle these Salted Caramel Avocado Choc Shots by Onist over your porridge, toast, or pancakes. They’re available to buy from Sainsbury’s.

Dairy giant Elmlea has now launched single and double plant-based cream. According to the company, it pours and whips just like a traditional cream. Why not try it out and pour it over your Christmas pudding this year?

Serve your Tofurky Plant Based Roast — made with wheat and tofu — with all the classic Christmas trimmings and drench in gravy for the perfect festive vegan meal. It’s available from health food shops including Holland & Barrett.

Marks & Spencer has added several vegan options to its Plant Kitchen range, including dairy-free Potato Dauphinoise. The creamy side includes an almond and cashew nut sauce and a parsley crumb topping.

Popaball’s unique glitter gravy Popabauble is both a food and a Christmas decoration. The brand says, “simply add to boiling water, stir, and pour over your food to enjoy a shim-merry Christmas dinner.” You can also hang the gravy encased in its bauble from the Christmas tree.

According to Asda, this plant-based blue cheese tastes just like the real thing. The supermarket’s Christmas range of Free-From cheeses includes a new double Gloucester with onion and chives. This is in addition to existing products such as cheddar, mozzarella, and soft cheeses. 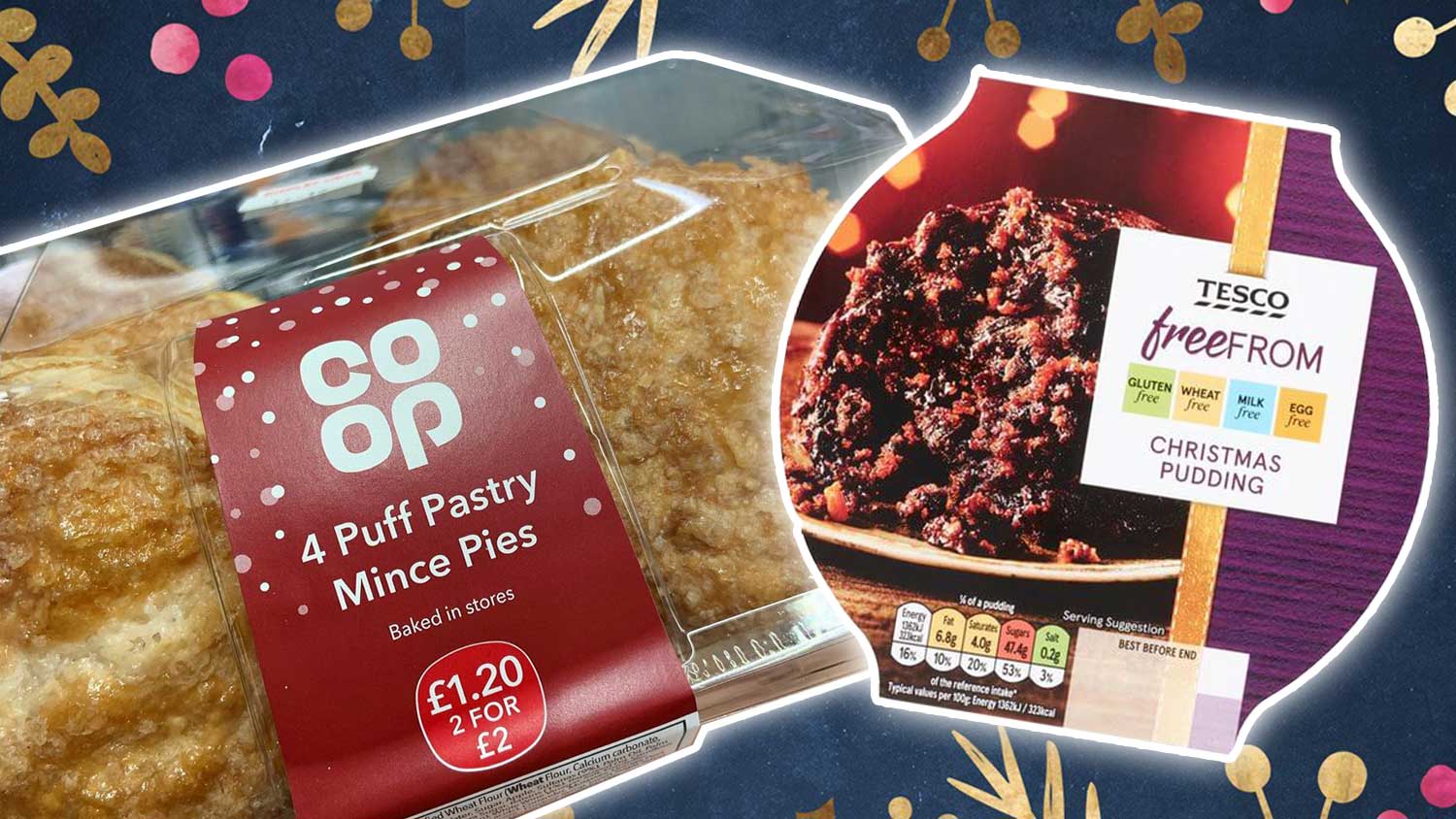