The UK could see it’s first ever fully vegan cooking show! The three women behind ‘Just Good Food’ have recently been raising money so that they are able to film ‘not just a pilot, but an AMAZING pilot‘, and with 5 days left on their crowdfunder, they’ve gone over their £4000 target by more than £300!

If the pilot is successful, the star of the new TV show will be vegan chef, Day Radley. Radley, who has been vegan for over 21 years, already has a website where she shares tons of her tasty recipes! Now she wants to take it one step further and head into people’s homes via their TV. Her aim is to hit a wide audience ‘who don’t look at blogs, who don’t watch youtube, who don’t have an instagram account.’ The team are hoping that having a show accessible on TV with ‘invite [these people] to try vegan.’

The UK has tons of cooking shows which, unfortunately for vegans, still revolve heavily around meat. Although people are becoming more aware that whole food plant-based options are healthier, this doesn’t stop the British public tuning into meat-based cooking shows. 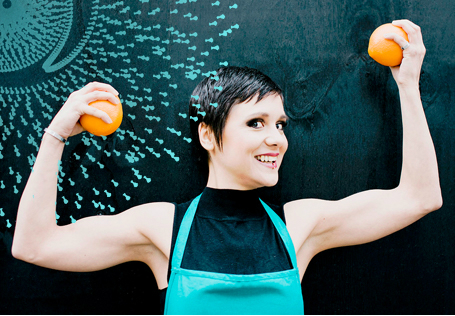 The initial show of support in the crowdfunding campaign suggests that the three women aren’t the only people who can see the benefits of vegan cooking reaching a wider audience. Often people believe that going vegan is a lot of hassle and not really worth it, or that they’ll end up eating bland tasteless meals. The team at Just Good Food will no doubt prove people wrong and hopefully inspire others to reduce their meat intake.

Now we must sit tight and wait for what we can only hope will be a wonderful pilot, and judging by Day’s other recipes it’s unlikely to disappoint!