Jaap Korteweg, a ninth-generation meat farmer, and Niko Koffeman founded The Vegetarian Butcher in the Netherlands in 2007.

Korteweg started the brand to satisfy his own craving for meatless “meat.” More than 4,000 outlets in 17 countries now sell The Vegetarian Butcher’s products. 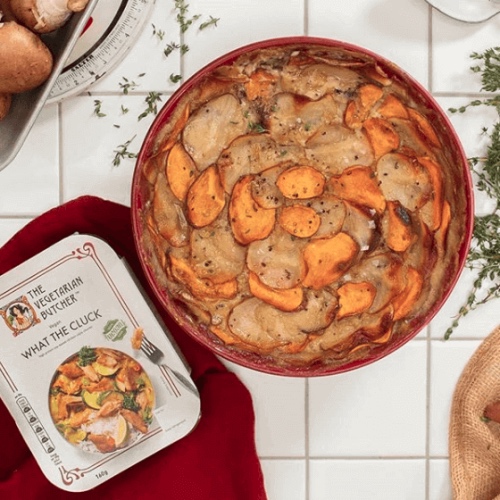 ‘Conquering the World’ With Plant-Based Meat

The acquisition enabled Unilever to expand its plant-based products portfolio. It also furthered The Vegetarian Butcher’s goal of becoming “the largest butcher in the world.”

“We want to take the next step—conquer the world,” Korteweg said following the Unilever acquisition. “It is our mission to make plant-based ‘meat’ the standard.”

“The development of a stainless steel cow that goes into grass and milk comes out, without the hassle of animals, is a long-cherished wish of mine,” Korteweg told Business Insider. He added: “Now that Unilever has taken over our dream to make The Vegetarian Butcher the largest butcher in the world, we can focus on the next breakthrough next to the work for the Butcher.”

Korteweg and Koffeman predict it will take seven years to get Those Vegan Cowboys’ products to market on a large scale.

“The upscaling and traditional processing of high-quality dairy copies takes time. But if it succeeds, this project will make a very positive contribution to animal welfare, fair world food distribution, nature, the climate, and biodiversity,” Korteweg told Flanders Bio.

According to the U.S. Department of Agriculture, milk consumption has declined by 40 percent since 1975. In 2018, milk sales plummeted by $1.1 billion, according to The Dairy Farmers of America.

Major milk producers also closed their doors. Dean Foods—America’s largest milk producer—filed for Chapter 11 bankruptcy in 2019. The company claimed its declining milk sales were the cause of its mounting debts.

While conventional dairy sales plummet, plant-based milk products have been on the rise. According to research firm, MarketsandMarkets—the dairy alternatives market is projected to grow from $17.3 billion in 2018 to nearly $30 billion by 2023.

The study revealed one reason consumers are turning to plant-based milk products is that they believe a vegan diet is healthier.