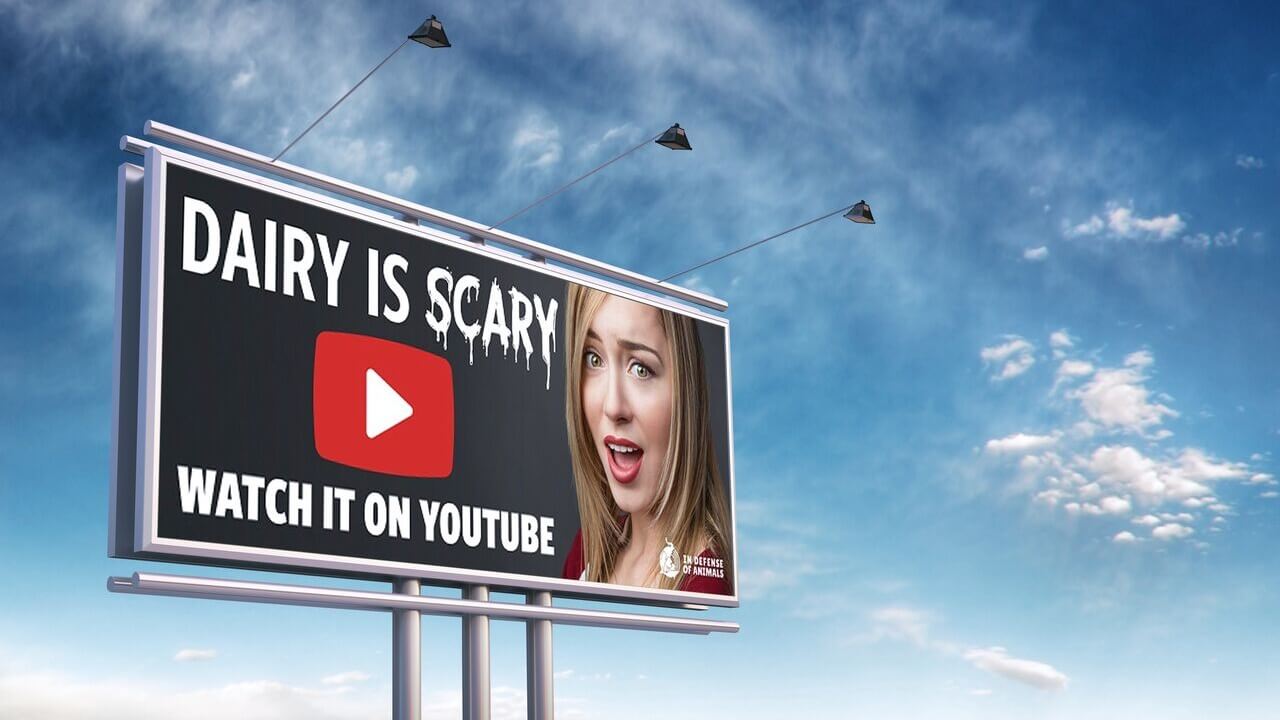 Sixty billboards in Los Angeles are encouraging the city’s more than four million residents to give up dairy products as part of an anti-Dairy-Month campaign from California-based nonprofit, In Defense of Animals.

The billboards are sprawled across the region — from Long Beach to the San Fernando Valley, to Downtown Los Angeles, South Central, Hollywood, and Eagle Rock. The billboards feature viral YouTube star Erin Janus and the tagline “Dairy is Scary.” The billboards, which are in either English or Spanish, encourage the city’s residents to watch the Dairy-Free Challenge video and go dairy-free for 21 days.

“Dairy really is scary, and it’s time to stop lining the pockets of the dairy industry at the expense of our health, the environment, and animal welfare,” said Marilyn Kroplick M.D., President of In Defense of Animals. “I urge everyone in LA to watch the Youtube video Dairy is Scary and take our 21-day Dairy Free Challenge.”

Janus stars in the YouTube video that’s been viewed more than 4.7 million times. The video details common dairy industry practices including cows being forcibly impregnated or having their baby calves taken away and turned into veal. It also explains that cows, like all other mammals (including humans), lactate only when pregnant or nursing and that the milk is produced specifically for baby cows, not other species.

“The suffering that millions of dairy cows endure at the hands of the profit-driven corporations and businesses that breed and exploit them is not okay,” Janus told LIVEKINDLY.

“I created this video quite simply because the public absolutely has to know. We have all seen dairy advertisements which depict happy, healthy cows alongside doting guardian-like farmers, but that is not the reality of the industry,” she said. “When an animal’s bodily function, fluid and reproductive system is the direct supply of a product in demand… that is an ethical recipe for disaster.”

“In five minutes, Janus also reveals the scary financial influence of big dairy on the U.S. education system and the health risks of dairy consumption,” In Defense of Animals noted.

The dairy industry perpetuates the use of growth hormones and antibiotics medically important for humans. Because of the industrialization of the industry, dairy cows are often tethered to milking machines that can infect their udder and cause mastitis — a painful infection that also increases the risk of pus winding up in the milk.

A growing number of consumers have already given up dairy as sales of nondairy products continue to rise. The nondairy milk sector is the largest plant-based category by sales, and cheese, yogurt, and ice cream aren’t far behind. Major ice cream manufacturers including Häagen Dazs, Ben & Jerry’s, and Halo Top all recently launched dairy-free options. Ben & Jerry’s vegan range now makes up 20 percent of its total offerings.