Devon is getting its first vegan deli. How On Earth, a family-run business, will open in Exeter this week.

The deli, originally a home business, was founded in 2017 by mother-daughter duo, Heidi and Chloe Howarth. But it soon became a family effort. The husband and father Daniel created the logo. Their son Ben helps run the business, too.

The entire family has been vegan for five years now. “I had always been veggie and raised the chIldren without meat too. I was kind of like most vegetarians and just hadn’t connected the dots with regards to how cruel dairy is,” Heidi tells LIVEKINDLY in an email. When Chloe went vegan six years ago, she followed.

“That is when Chloe started to experiment with creating her own plant-based protein recipes, as a birthday treat for her dad,” Heidi adds.

In 2017, Chloe recreated a favorite of hers: KFC fried chicken. “She posted it on Instagram and a local vegan shop in Exeter asked if they could sell it. So we converted our utility room and started our business,” says Heidi. How On Earth has been developing its own recipes for plant-based meat ever since.

The COVID-19 pandemic pushed back the brick-and-mortar location’s opening date, which was intended to be in March. Despite delays, the family adapted to working from home once again. Since then, the Howarths have found success with home deliveries.

“It has been a time we could never have foreseen or imagined but we adapted as quickly as we could as we wanted to keep our customers, who may have been shielding, stocked up with the plant-based food they know and love,” Heidi told Devon Live.

Once open for business, How On Earth will serve a range of local artisan vegan cheeses, sweets, and housemade plant-based deli meat. Food will be available for takeaway as well. 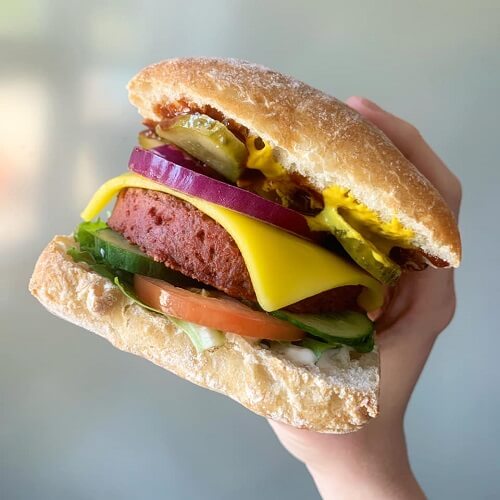 The signature “How On Earth” burger is made from pea and soy protein. | How On Earth

Better for the Planet

“The dinosaurs are pure nostalgia! In the UK a company used to make turkey dinosaurs and Chloe had always wanted a veggie version, so now as a grown-up, she has created a vegan version,” says Heidi.

The How On Earth Burger, a grillable plant-based patty made from pea and soy protein, is their answer to the popular Beyond Burger. Many of the sauces are made in-house and bread is sourced from the Boatyard Cafe & Bakery, a local business.

It’s very much part of the family’s mission to offer more sustainable food. They use plastic-free packaging for their meat alternatives, which they sell by the weight and at a lower price. “Did you know our smokey bacon style rashers are cheaper than the Sainsbury’s equivalent?” they wrote in a Facebook post.

How On Earth opens on July 15 at 76 South Street in Exeter.