A Jamaican restaurant and entertainment venue in Deptford, a south-east London neighborhood, is going vegan. As of today, Buster Mantis will be trialing a completely plant-based menu for the next three months in collaboration with local vegan musician, Denai Moore.

The decision follows two successful vegan pop-ups this summer, also in collaboration with Moore. As a musician, Moore describes herself as a “genre-free” artist, but when it comes to food, she definitely has a preference. Moore is the founder of Dee’s Table, a weekly London pop-up serving “modern vegan Jamaican food.” She calls it her “food lovechild.”

Moore posted the collaboration announcement with Buster Mantis on Instagram, alongside the new vegan menu, captioning, “BIG NEWS! I’m excited to announce that I’ll be taking over the @bustermantis kitchen for the next three months!” 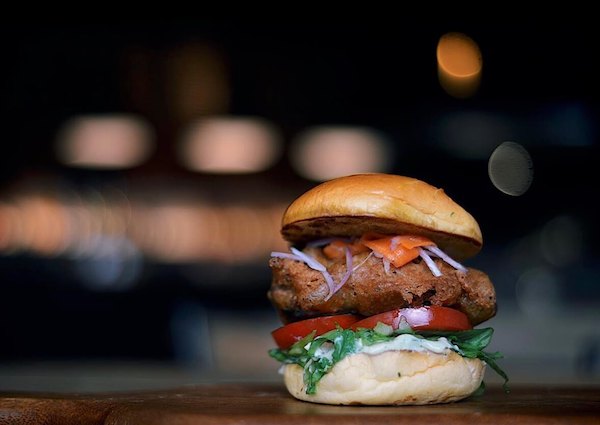 The menu includes a selection of small plates, sides, big plates, and sweets, all a reflection of Moore’s Jamaican heritage. There are the familiar favorites, such as fried plantains and jerk jackfruit tacos, but the more interesting dishes include saltfish fritters with ackee crema and smokey onions; brown stew made with braised aubergine, mushrooms, and okra served with gungo rice and peas; umami fries, and more. Diners are encouraged to end the meal on a sweet note with Moore’s baked rum and raisin “cheezecake,” served with a drizzle of salted coconut milk caramel.

Buster Mantis celebrated the new partnership while owning that they had made a major change, which might not be readily accepted by all customers. The restaurant, bar, and concert space is known for its jerk chicken, and a few customers were upset when they realized the menu had changed. The company wrote on Instagram, “This is the first time in our nearly 3-year life that we’ve changed our kitchen so drastically, and we’ve already had a few customers walk out when they couldn’t get their beloved Buster Mantis jerk chicken.” However, Buster Mantis seemed unfazed. They will still serve plenty of meaty jerk entrees, it just doesn’t come from an animal anymore.