A vegan donut shop now exists in the Marvel Universe.

A recent animated special based on the 2018 movie “Marvel Rising: Secret Warriors” introduced the new hangout for the young heroes. “Marvel Rising: Heart of Iron” sees “confusion, miscommunication, and some self-reflection that happened along the way,” according to the website. It features the character Ironheart, who is adjusting to life as a new college student.

The vegan donut shop, named “Excelsior!” after Marvel creator Stan Lee’s catchphrase, is one of the characters favorite spots. Illustrators clearly labeled the shop as vegan, which was apparently a conscious decision.

He added, “I actually go to vegan restaurants, although I’m not vegan, and the ingredients are so bizarre, we had fun with that.” Flavors at the shop include Zucchini Pomegranate Crullers, Tofu Turnip Twists, and Chia Kale Cakes. 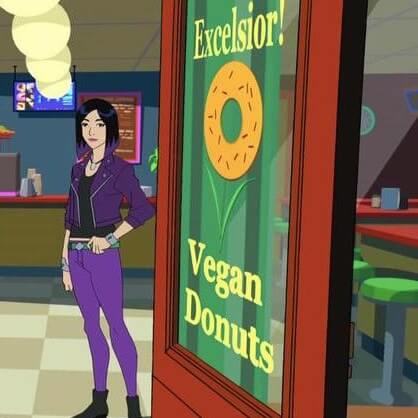 There have been few instances of completely vegan TV shows. An Australian kids’ TV show, aptly named “Vegan Kids TV,” made headlines last year as the first of its kind. Created in partnership with Vegan Kids Magazine, the show includes family-friendly games and interviews with children. An episode aired on YouTube in March 2018.

Vegan or vegetarian characters are more common. Most people know about Lisa Simpson, the middle child on “The Simpsons,” who stopped eating meat after visiting a petting zoo in the 1995 episode “Lisa the Vegetarian.” Her passion for animals has been a cornerstone of her character ever since.

Scooby Doo’s lanky hippie best friend Shaggy Rogers is a vegetarian, thanks to his original voice actor, radio host Casey Kasem. Kasem. Kasem, a vegan, quit the show in 1995 when he was asked to voice Shaggy for a Burger King commercial, according to Think Progress. He returned in 2002 when producers agreed to make Shaggy vegetarian.

Aang, the main character of the Nickelodeon animated fantasy show “Avatar: The Last Airbender,” was a member of the Air Tribe, which follows Buddhist values and adheres to a vegetarian diet.

The full “Marvel Rising: Heart of Iron” episode is available on YouTube.