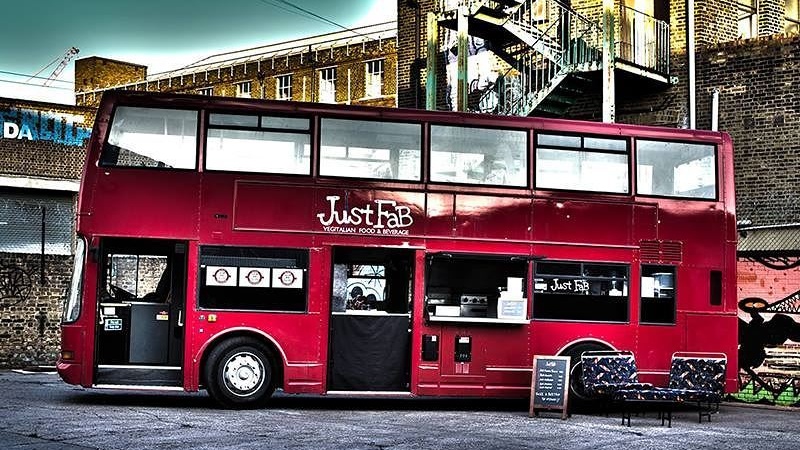 According to the website, Just FaB is a family-owned vegan Italian restaurant founded by Fabio Pironti, who acts as director of the operation. His mother, chef Myrna Panascia, is the co-founder. Determined to bring his mother’s vegan Sicilian street food to the streets of London, in 2014, Pironti converted a red double-decker bus to a restaurant. He kept as many original features intact as possible while using upcycled materials and artwork to create a dining space unique to the business. In the midst of the financial crisis, Pironti and Panascia began selling authentic, vegan Italian street food on the festival scene before settling down at a permanent location with outdoor seating in the London borough of Hackney in September 2015.

The menu features a wide variety of vegan Italian classics such as arancini, Sicilian pizza, lasagne featuring soya-based bolognese and dairy-free parmesan and bechamel, panelle (Italian chickpea fritters), polenta, zucchini pasta, tiramisu, and others. All recipes were carefully developed by Panascia, a vegan of 20 years, sourcing specialty ingredients, such as Sicilian chili oil, sourced from family-owned farms in Sicily as possible.

There’s nothing like the sunshine in London! Vegan burgers & cocktails anyone? Photo ? by @maryfefi

At the permanent Hackney location, patrons have the option of getting takeaway or dining on the top level of the bus or grabbing a bench in the outdoor seating area. Just FaB also has a second bus for mobile vegan catering for events.

Aside from specialty foods, the duo prefers to focus on supporting local farms in a move to further reduce their carbon footprint. “Where possible our ingredients are organic and we have a zero-mileage policy, sourcing as many ingredients locally as we can,” said Pironti. “Our bread is made by professional backers and come in two kind Focaccia and Ciabatta, both amazing.”

London is quickly becoming a hub for vegan food. Fine dining French restaurant Gauthier Soho announced last month that it would convert to a completely vegan menu, American vegan fast-casual chain By Chloe is set to open a second London location, and vegan fried chicken restaurant Temple of Seitan is such a hit with customers that the owners were able to expand to Camden.

According to the restaurant, those looking to stay up-to-date on the Just FaB vegan Italian food bus’s location can do so by subscribing to the newsletter.