The plant-based restaurant chain will open the new location — complete with drive-thru — in Fountain Valley, California in early 2020.

Plant Power Fast Food already has 5 restaurants, in Redlands, Long Beach, Encinitas, Ocean Beach, and San Diego University. The latter, which opened earlier this year, pulled in more than 1,000 people on its first day of trading.

Plant Power Fast Food specializes in fast-food with a twist — none of it includes animal products. Its signature Big Zac burger features two beef-like patties in a bun, with American dairy-free cheese, its own Zac sauce, and lettuce, onions, and pickles.

It also serves vegan “meaty” sides, including nuggets, tenders, and even Buffalo Wings.

Co-founder Zach Vouga said last year, “our secret mission has always been to turn more people on to a vegan diet.”

“It’s obviously the wave of the future,” he told Longbeachize. “But we totally understand that diet is such a personal issue and that each person goes at his or her own pace. So the Plant Power Fast Food brand is really all about turning people on to how delicious plant-based food can be.”

“Our brand isn’t preachy,” said Vouga. “The food itself is the message.” 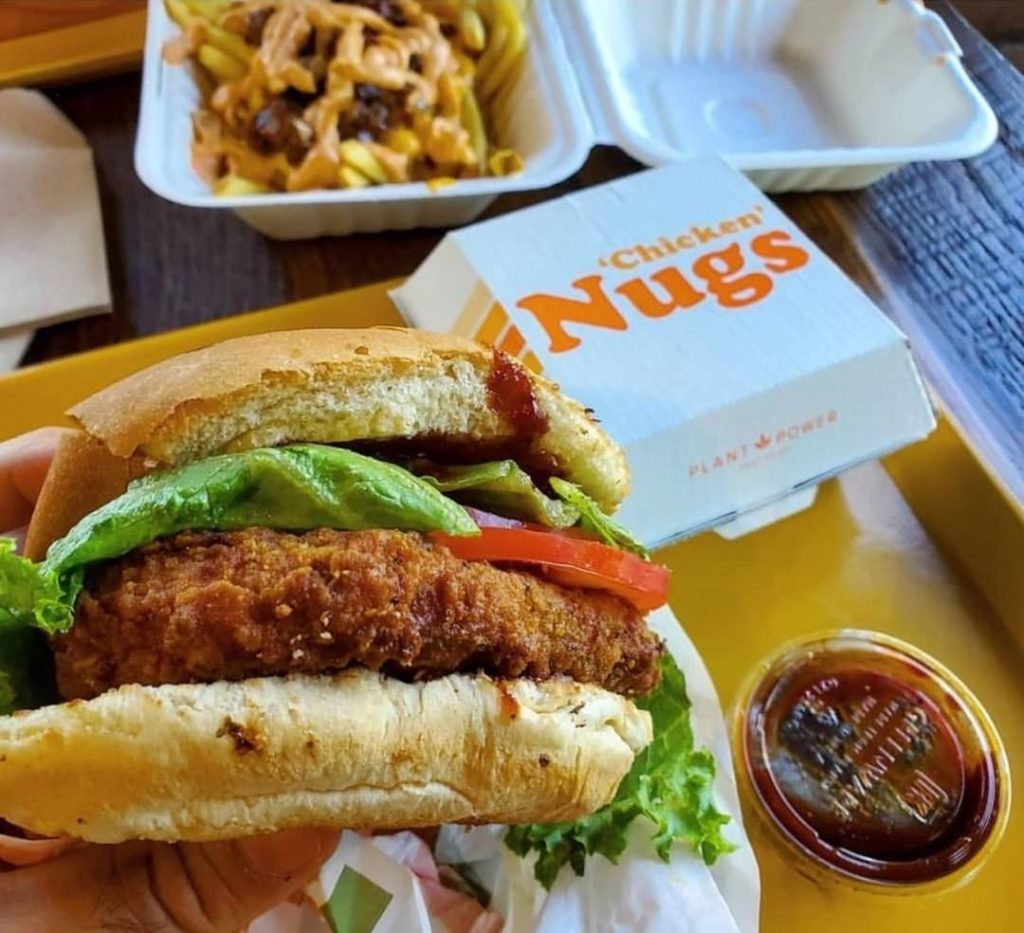 Fast-Food Gets a Vegan Makeover

Last year, Plant Power Fast Food revealed its plan to open 10 new locations by 2021. Co-owner of the company Jeffrey Harris has even labeled it “vegan McDonalds.” But the vegan fast-food joint has competition — from traditional fast-food joints, like the real McDonald’s.

McDonald’s has added a few vegan options to its menus around the world. In the summer, it launched the Big Vegan TS in Germany. Around the same time, rumors began to circulate that the fast-food giant was about to launch a vegan breakfast menu in the UK. The menu is yet to materialize, but the chain has since partnered with Beyond Meat to trial a burger in select locations in Canada.

Elsewhere in Canada, Carl’s Jr has also added the Beyond Burger to the menu, and KFC has partnered with Lightlife to launch vegan popcorn chicken and nuggets.

Dan Curtin — President and CEO of Greenleaf Foods, SPC, the owner of Lightlife — said in a statement, “with pioneering partners like KFC, we can make plant-based foods more broadly available to the growing number of consumers seeking the option on the go.”