Vegan eel is now a thing and it could be coming to a restaurant menu near you very soon.

Ocean Hugger Foods — a sustainable plant-based seafood company — is set to debut its latest product at the National Restaurant Association Show in Chicago. The show is the single largest gathering of restaurant and foodservice professionals, with more than 65,000 professionals.

Named Unami, the new product — which is made from eggplant — is intended to mimic the taste and texture of freshwater eel.

According to a press release, through a patent-pending process by Ocean Hugger Foods, the texture of the eggplants is altered to be more firm and eel-like; the vegetables are then marinated with gluten-free soy sauce, algae oil, and mirin.

The goal is to use Unami to replace freshwater eel– or unagi, as it is known in Japan — in sushi and rice bowls, but could also be used for more innovative, creative dishes, like eel pizza or eel tacos.

“Unami is a great alternative for chefs and foodservice operators who want to provide their guests with dishes highlighting the natural, firm texture of unagi without the negative environmental impacts of wild of farmed eel,” said James Corwell, the co-founder of Ocean Hugger Foods, in a statement. 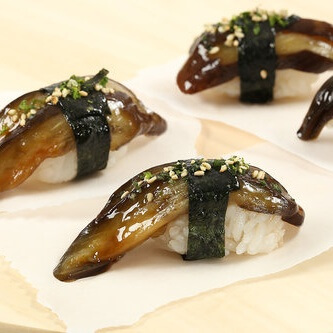 According to the Atlantic, unagi is one of Hamamatsu, Japan’s most famous and sought-after exports. Katie Okamoto writes for the magazine, “anyone who comes to Hamamatsu will know within minutes of arrival that unagi is this city’s star, a major source of local pride and identity.”

But soon, this cultural symbol could rely on environmentally-damaging farming solely for survival, thanks to overconsumption.

Eel farming is a “fundamentally unsustainable system,” says Okamoto. She adds, “[it] effectively withdraws from an account every year and reinvests nothing.”

Glass eels, which are used for farming, are in significant decline — in 1965, a catch of 140 tonnes was a regular occurrence in Japan, by 2000, this dropped by 71 percent to 40 tonnes. The decline has lead to imports being brought in from all over Asia, but also from as far as the United States, writes Okamoto.

Because of its detrimental impact on the environment, unagi is recommended to avoid on Monterey Bay Aquarium’s Seafood Watch list. It notes, “eel ranks among the worst seafood choices from an environmental perspective.”

There are currently few options for vegan eel. Libelula, a restaurant based in Fresno, California, makes it from spiralized shiitake mushrooms. It’s also possible to make your own, as blogger Rekka Bellum did with chickpea flour on her blog, Grim Grains.