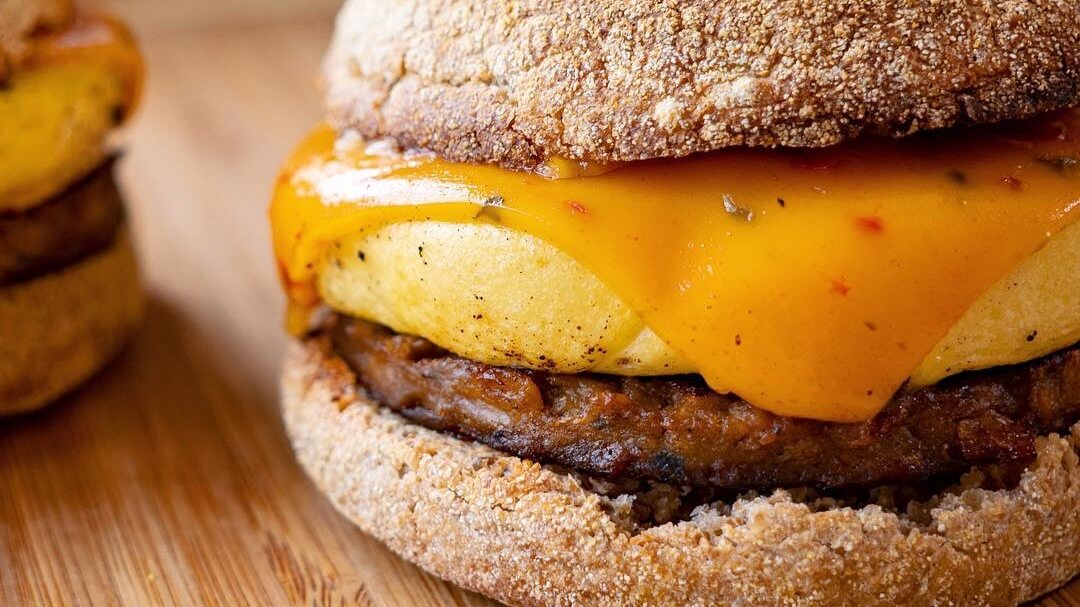 Whole Foods is once again expanding its vegan options with three new hot breakfast items. Now in addition to the $2.00 coffee and vegan pastry deal (looking at you, maple donut), customers can order hot vegan egg breakfast sandwiches for a substantial start to every morning.

The English muffin-style sandwiches are launching in 58 Whole Foods Markets across Southern California, Hawaii, Arizona, and the greater Las Vegas area later this month. All include EatGÜD’s latest product, a plant-based gluten-free egg patty made from chickpeas. EatGÜD is an allergen-friendly vegan company specializing in whole food plant-based falafel, which are already available at many Whole Foods stores.

Whole Foods has also partnered with other plant-based companies to create its new breakfast offerings, including Kite Hill, Good Planet, El Burrito, and Lightlife. The grocer has always placed an emphasis on supporting quality small businesses, and all of these brands can also be found in both regional and national stores.

Customers looking for a hot meal can choose from three very distinct “eggy” sandwich creations. In addition to EatGÜD’s egg, the Very Veggie is made with roasted mushrooms, sliced tomato, baby spinach, and a schmear of Kite Hill cream cheese; the Spicy Soyrizo contains El Burrito soyrizo, vegan chipotle aioli, and Good Planet vegan cheddar cheese; and the Bacun V’Egg & Cheese features Lightlife tempeh bacon and Good Planet vegan cheddar cheese. These sandwiches will be sold either at the hot bar or deli, depending on the store.

Whole Foods is approaching the point of creating a vegan version of nearly every option in its stores. Beyond the inner shelves of plant-based milks, meats, and cheeses, its extensive foodservice arm has become increasingly vegan-friendly. One can order vegan sushi with raw tomato-based tuna, mile-high hot cheesesteak sandwiches, mac and cheese, beefy stir-fry, cheesy pizzas, fresh baked goods, and more. Many of its locations are also home to fast-casual vegan restaurants, like by CHLOE. and Next Level Burger.

Vegan eggs are a rapidly growing food trend, and several companies are creating their own versions for plant-based scrambles, omelets, frittatas, and of course, egg sandwiches. There’s the JUST Egg, Scramblit, and Follow Your Heart VeganEgg, among other emerging products. Want to make your own vegan egg sandwich? Follow theyummyvegan’s tips to making a crave-worthy plant-based breakfast.