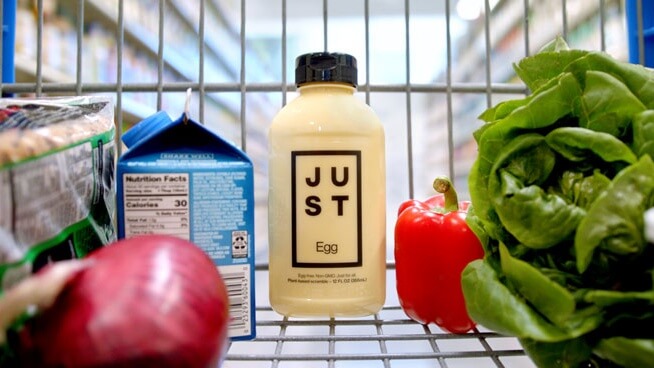 JUST Egg was named one of Time magazine’s “10 Smartest Sustainable Products of 2018.”

The vegan egg replacement is made from mung bean, and if “cooked right” can taste “pretty close to the real thing,” Time reported.

According to the egg manufacturer, its product “scrambles and tastes like eggs,” but also works well in French toast, omelet, and fried rice recipes.

So far, consumers are responding well to JUST Egg. In September – just a week after the product’s launch – data showed the vegan egg product out-sold chicken eggs at one major retailer. At that time, JUST Egg was available in a few grocery chains in the Midwest and had recently been made available at Gelson’s in Southern California.

“We’re grateful to see this extraordinary sales data,” Josh Tetrick, CEO of JUST, told LIVEKINDLY. “We’ve always said that if you make it easy for good people to eat well, they will.”

In June, a new global sustainability index from the Farm Animal Investment Risk and Return investor initiative showed that the majority of the world’s dairy, meat, and fish suppliers aren’t addressing or managing their contributions to climate change. The industry’s neglect is putting the Paris Agreement emissions targets at risk. The London-based initiative launched the index to provide investors with a tool that can easily rank the world’s 60 largest producers of dairy, meat, and aquaculture on the management of business risks.

“It is clear that the meat and dairy industries have remained out of public scrutiny in terms of their significant climate impact,” Shefali Sharma, director of the Institute for Agriculture and Trade Policy European office, told The Guardian. “For this to change, these companies must be held accountable for the emissions and they must have credible, independently verifiable emissions reductions strategy.”